This second book of the Mortal Instruments trilogy blends teen romance, fantasy, horror, action, suspense, and mystery in one piquant cocktail. It enfolds us in a world populated by angels, demons, vampires, werewolves, fairies, warlocks, and the secret society of Shadowhunters who police them. It touches on the nature of family, the thin line between friendship and romantic love, the pain of injustice, the clash of good and evil, the quest for power for its own sake, and the discovery of unlooked-for powers in a couple of confused young heroes. And it's just plain fun to read.

Clary has just found out that Jace is her brother - which complicates the fact that they are deeply in lust with each other. This dilemma sends ripples into their other relationships. Fellow Shadowhunter Alec, for instance, would rather die than reveal his gay crush on his best friend and foster brother. Meanwhile, Clary's "mundane" best friend Simon wants to be her boyfriend, and competing with Jace may cost him his soul.

As Clary and Luke, her werewolf surrogate-father, wait for Clary's mother to wake up from a mysterious coma, a vindictive Inquisitor from the Shadowhunter Clave rolls into town and puts the screws to Jace. Somehow this Inquistor can't believe Jace isn't in league with his evil father. Speaking of whom, Valentine Morgenstern continues to unfold his evil plan to destroy the Clave and forge a new order from its ashes. A string of grisly murders targeting members of the Downworlder community (fairies, vampires, and werewolves) has something to do with this, as does the theft of a sword of power handed down to the Clave by an angel. 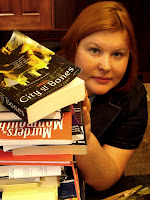 It turns out that Valentine is gathering an army of demons to serve him in his rebellion. This is topping it pretty high, for a guy whose problem with the Clave is that it doesn't take a hard enough line against the spawn of hell! The line between good guys and bad guys will be seriously tested in the ensuing battle, along with bonds of love and friendship. Jace, Clary, and Simon will all come into unique powers. And a brooding fate will linger at the end, drawing them and those around them into the final installment, City of Glass.

Teens who are up for an exciting read, and who enjoy the Twilight series' blend of spookiness and romance, will be especially rewarded by this cleverly paced, brilliantly creative series and especially its heroine, who hardly understands the effect she has on those around her. Perhaps you, too, will fall in love with her!

Welcome to the grim castle of Gormenghast, where for seventy-six generations of the House of Groan, life has been regulated to a strict schedule of complex and sacred ritual. We come to it on the day the seventy-seventh Earl is born: young Titus of the book's title. Titus makes a most unusual hero, given that at the end of some 400 pages, he is still less than 2 years old. Nevertheless his birth and early infancy are filled with omens of change and upheaval in this strange, unmagical fantasy world where time stands still. Consider, for example, his christening at the age of 12 days, when Titus takes a spill out of a holy book and, as he falls to the floor, tears a page out with him. "This," our narrator solemnly informs us, "was his first recorded act of blasphemy."

Be assured that it won't be his last. 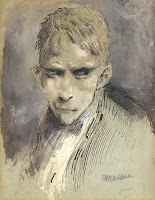 But between heretical gestures by a violet-eyed toddler, most of the novel's action concerns its grown-up characters. Among them are Titus' father, Lord Sepulchrave, who finds no relief from his lifelong melancholy except in books; his mother, the Lady Gertrude, who surrounds her vast bulk with a living carpet of white cats and a feathery mantle of wild birds; and his teenage sister Fuchsia, who more nearly resembles a functioning human being than most of the people she meets.

What a range of characters they cover!--from the skeletal, taciturn Flay to the monstrous, flamboyant Swelter; from the giggling Doctor Prunesquallor to the nervous wreck of Nannie Slagg. The mindless twin Aunts are matched in ghastliness only by the wily upstart Steerpike. You may either laugh or choke, or both at once, at the foul oaths of Barquentine. You will shiver, either with a carnal thrill or with grim dread, as the fate of Keda unfolds. And you will get weird looks from your co-workers if, like me, you read some of the poems within the story aloud in the break room. (One of my colleagues keeps asking me to remind him of "The Frivolous Cake.")

The plot moves slowly, and not much happens in it -- apart from an act of arson and a duel to the death, which are especially exciting due to the long, suspenseful build-up to them. Mature readers are needed, however, as the book contains gruesome scenes of death and slaughter, a long-premeditated suicide, a descent into madness, and some frank references to certain parts of the body that are a bit startling to find in the midst of Gothic stylisms. It also showcases a rather pessimistic view of human nature, lifting the weaknesses of even the best character to the level of the grotesque.

One can spot echoes of Dickens, Austen, and their ilk in the social customs this book portrays, and in the whimsical way characters are named. What Titus Groan mainly shares with the novels of that earlier age is a way of satirizing the foibles of a decaying society; what it adds, however, is the cynicism of viewing such a society through the lens of a war that seemed to herald the end of the world, and of a holocaust that showed what man's most enlightened ideas are really made of. In such a light, many seemingly unalterable social and spiritual truths might appear irrelevant, or even blasphemous. If this is a comedy of manners, it's a black one. But more to the point, it's a tragedy -- at least, the first act of one, whose final result can already be guessed.

When Titus Groan first appeared in 1946, it was immediately recognized as one of the great literary achievements of its time. Yet it never drew a very wide readership, particularly on this side of the Atlantic; and together with the two "Titus novels" that followed it (Gormenghast in 1950 and Titus Alone in 1959), it became the target of a fair amount of acid criticism.

One problem may be that it didn't fit into any pre-existing categories. Eight years ahead of The Lord of the Rings, it appeared like a prophetic forerunner of the yet-to-be-established genre of adult fantasy. Influenced by the traumatic events of World War II, in which Peake served, it crystallizes the moral and spiritual disillusionment of its author and his generation in a ponderous, Gothic tragedy full of repulsive characters, perplexing imagery, and troubling questions like: "What is this saying about our world?"

Sixty-odd years later, these problems continue to dampen this novel's likelihood of becoming a blockbuster hit. But at the same time, they heighten the texture of an outpouring of beautiful language, a novel of stunningly unique style, a book that thwarts every conceivable expectation and convention and demands to be experienced on its own terms. Crafted by an author who was also a gifted poet and renowned artist, Titus Groan comes to life in imagery of colossal vividness and concreteness. Perhaps sensing that he had gone as far as his career as a celebrated book illustrator could take him, Peake used words to paint vast spaces and to manipulate the passage of time, turning an instant of rapid action into an hour of exquisitely-paced suspense. And his portrait of a diseased, dying world still demands to be looked at. The question is: Will you flinch?
Posted by RobbieFish at 12:16 PM