The St. Louis Symphony Orchestra and Chorus performed Beethoven's 9th tonight in a sold-out Powell Hall. As a member of the Chorus, I got to hear it from right on the stage, and sing in the finale. We did rather well, if I may say so. The performance clocked in at 62 minutes, and no part of it seemed overly long. The audience seemed to enjoy it heartily. At times it was all I could do not to laugh aloud for pleasure. 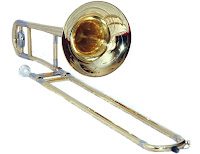 Conductor David Robertson reached for tempi more in keeping with Beethoven's metronome markings than the general run of over-the-top, modern performances. I particularly enjoyed his tempo in the third, Andante Cantabile movement, making it sound lovely and lyrical, a world away from the ponderous slowness showcased by a recent local radio broadcast of the same movement conducted by Georg Solti.

During rehearsals, several ideas have struck me about this symphony, over and above what I mentioned before in my "book review" of it. For one, in the opening pages of the final movement, Beethoven seems to be letting us look inside his head and see his thought process as he decided how to proceed with his fourth movement. First he thinks, "Aaargh! How am I supposed to finish this thing? Only three movements in and it's already pushing 40 minutes!" Then he considers the dramatic first movement and goes, "I've already done that." Then he recollects the scherzo and thinks, "Done that. Geez, I'm too old for this." He briefly recalls the Andante and thinks, "It's too bad. Lyricism is right out. No, wait - how about this tune?" He hums a few bars of the Ode to Joy theme. "Yes! That's it!" He states the full melody, spins out a few variations, brings the piece to a climax... "Aaaargh! I've shot my wad and the piece is only, like, 3 minutes long! What am I going to do?" And then the baritone soloist comes in, joined soon after by the bass section of the chorus, and presently the choral finale is in full swing.

So, as I see it, the instrumental recitative is sort of a self-referential gesture, like how Charlie Kaufman's screenplay for Adaptation is about his struggle to wrote a screenplay based on a boring book, and his eventual decision to replace the original storyline with a pile of trashy Hollywood gimmicks. The film is so self-referential that it's actually about itself. Likewise, the opening of the fourth movement of Beethoven's Ninth is about how Beethoven worked out how to write it. "You're so vain, you probably think this song is about you" ain't in it.

Beethoven could afford to be vain. He was brilliant. The performance I just heard (and participated in) was a reminder of that. One other, small touch jumped out at me as I listened. It was where the trombones briefly come in during the second movement. They lit everything up with a silvery glory. Deaf or not, Beethoven knew a few things about orchestral sound.
Posted by RobbieFish at 10:07 PM