A couple nights ago I was eating out at a nice Italian restaurant when, at the next table over, a young fellow happened to be celebrating his 30th birthday.

He was dining in a party of five, accompanied by two young women and an older couple. After their meal, a waitress brought him a big round cheesecake with 3 candles on it, then left. This put the burden of singing the "Birthday Song" on the four other people at the table.

Young Woman No. 1 gamely started the song, beckoning to the other three guests to join in. None of them sang a note. The Old Man sat with his lips sealed, staring grumpily down at the table, as he seemed to do every time I looked over. The Old Woman, while a bit more lively in her looks, didn't so much as twitch a lip. I couldn't say anything about the expression of Young Woman No. 2, who had her back to me, but even over the ambient noise of the restaurant it was evident that no one was helping Young Woman No. 1 sing her song.

So she stopped and tried again. She told the others, "Come on," and started the song over. Their lips remained completely, sullenly still. She continued singing, beckoning to the others, but she was clearly unnerved at having to sing the birthday song solo in front of 3 guests who flatly refused to sing. Her rendition sadly petered out.

I won't conceal from you that I was utterly disgusted. I know some people don't feel they are good singers. I know some people aren't good singers. But I never thought I would see three out of four people in any group, of any age, refusing to sing "Happy Birthday" to a nice kid. In what I saw the other night, there was something of pride, something of meanness, something of self-centeredness, and a great deal of the atrocious delusion that too many people carry around these days - the delusion that it is more shameful to be seen or heard singing than to clam up when everybody is counting on you.

In reality, not one-tenth of the people who believe they "can't carry a tune in a bucket" are unable to sing. Being able to sing, even in a sketchy way, is a key social skill of the average human being. We may be expected less to exercise it now that we have digital jukeboxes, radios, MP3 players, and mass-produced recordings to play on them. We may have more than enough music in our lives - in the car, in shops, in elevators, in the shower for goodness' sake - so that we feel no need to exercise our singing muscles. We may also feel the expectations of our potential hearers are too high for us to reach. And so, somehow, as a culture, we have been brainwashed to regard ourselves as tone-deaf. 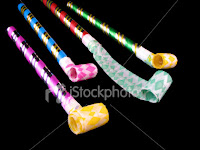 But really! Not even to stick your neck out and sing "Happy Birthday" to a young lad of 30? To close your mouth in such a sullen manner on what ought to be a moment of friendly celebration? To let the one person in four brave enough to risk the world's best-known song wear herself out trying to get you to join her? I've known people who, in church, at least had the graciousness to open the hymnal and mouth the words along with everyone else, though they didn't sing a note. I've known people who, in spite of only knowing how to sing one note, courageously droned it through every song while the rest of the crowd carried the tune. Them I can respect. But to sit and pout, without making any pretence of following the song, is frankly despicable - all the worse when it is so exposed.

"Happy Birthday" has to be sung. It's the law! It doesn't matter how many different keys it is sung to at a given time. It doesn't matter whether some people come to the end of it before others. It doesn't matter how atrocious it sounds. It is a social nicety. It means: "We are friends, not strangers. We are human souls, not beasts. We take pleasure in your company. We share your joys. We appreciate your accomplishments. We are thankful for what the past year has brought you. We wish you happiness in the year to come." You can't say it by staring grumpily at the table. You must sing it!
Posted by RobbieFish at 9:14 AM