Someone recently asked me for a Christmas gift wish list. In response, I buried them under the following list of books - which is only an abridged list of titles I would be interested in reading. I limited myself to one book by each of the following authors or combinations of authors - mainly installments that I missed in series in which I have already read at least one book. Given more time, I could come up with a much bigger list. But the real question is whether I would ever have time to read them all!
EDIT: Here are the books from this list that my mom and her husband bought me for Christmas. I'm not sure how The Story Thieves got into this pile. 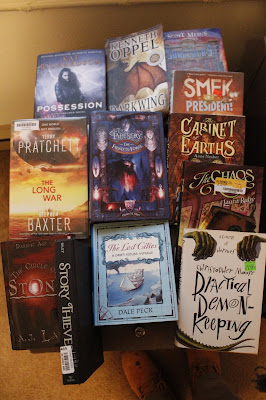 Posted by RobbieFish at 2:38 PM No comments:

Disclaimer: I don't know how any of the proper names in this book are spelled. This is Book 1 of a series titled "The Dagger and the Coin." My review is based on an audiobook read by Pete Bradbury. It beguiled a number of road trips of middling length with a fantasy world, depicted in great detail across a broad canvas, in which humans were ruled for ages by dragons. But hundreds of years ago, the dragons fought each other to extinction, leaving a continent laced with artifacts of indestructible dragon jade and divided into countries that, in these latter days, seem to be headed onto the dragon's path. That is to say, a war is brewing that could threaten civilization itself. The question implied by the title of the series is whether the fate of nations will be influenced more by armed combat or by economics.

Author Abraham sets the game board with fascinating, complex characters who represent these forces in the highest degree. There's a nobleman whose commitment to his kingdom's traditional values is so absolute, his sense of rightness so intolerantly pure, that it impairs his performance in political gamesmanship. There's an upstart at court whose weak character and scholarly tendencies make him strangely sympathetic, even though he looks likely to become one of the great monsters of his world's history. There's a girl who was raised as the ward of the bank, who takes desperate steps to protect the local branch's assets when an invading army threatens the existence of everything she has known. There's a mercenary who, in his previous career as a soldier, slew the king he had helped put on a throne, due to a devastating betrayal from which he may never recover. There's the leader of a troupe of actors who carries a deadly secret in his blood - a power that has lain hidden from the world for long ages, but is now ready to show itself. There are creatures of several different roughly humanoid races, co-existing more or less harmoniously while people of the First Blood (humans) battle it out in a game of sieges, acts of genocide, insurrections, assassinations, betrayals, forgeries and frauds.

This book does a lot of world building and character developing, which, on the one hand, results in a pace that feels a bit slow, but on the other hand, fills the headspace with fabulous imagery. Besides, there are many passages of terrific suspense and thrilling action, to say nothing of mind-numbing shocks and horrors. My interest was so engaged that, immediately on finishing this book, I moved on to the sequel, The King's Blood. Further books in the series are The Tyrant's Law, The Widow's House and The Spider's War. Abraham is also the author of the "Long Price" quartet, starting with A Shadow in Summer; The Incident of the Harrowmoor Dogs; and some minor works in collaboration with George R.R. Martin. He also writes under the pen-name M.L.N. Hanover and, with co-author Ty Franck, as James S.A. Corey.
Posted by RobbieFish at 1:07 PM No comments: