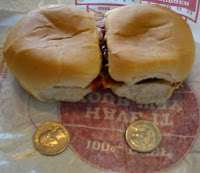 Everything is coming up sliders. I'm surely not the first person to notice that, quite suddenly within the past few months, all the fast-food burger chains have started serving mini-hamburgers. The meek shall inherit the earth, and White Castle shall rule the fast food industry.

All right, I've done the rounds and tried them out. I've had Burger King's "burger shots." I've tried Jack-in-the-Box's "mini sirloin burgers." I've sampled similar offerings at Hardee's, the steakburger shooters at Steak'n'Shake, and of course, as a control sample, the classic White Castle.

I still have to hand it to White Castle, who came up with the idea first. They really make a unique little burger, what with the steamed meat and the reconstituted onions. But if you like backyard barbecue taste, Burger King really has a nice thing going with its burger shots. Their only drawback is that you have to rip each pair of juicy, charbroiled sliders apart, since both the buns and the patties come fused together.

Jack-in-the-Box errs on the side of a thick little burger, covering it in grilled onions and cheese and sauce so that it's almost like a Philly cheesesteak. Steak'n'Shake takes the exotic flavoring idea a step further, offering five flavors of mini-burgers, including mustard & ketchup, A-1 steak sauce, barbecue, chipotle, and some kind of cheesesteak number. However, this only partly makes up for their squashed-flat, greasy-spoon style of "steakburgers."

Hardee's, where the best burgers in fast-food-chaindom are to be had, doesn't even make a very serious attempt to serve a mini-burger, opting for a "1/4-pound little thickburger" instead. Wasn't there a time when a quarter-pound hamburger was considered huge? 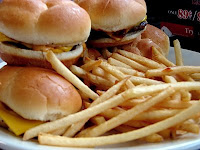 This could be just a brief fad, flaring up and dying down equally fast. But I, for one, see a future in it. Something must be said for the advantages of ordering a snack-sized hamburger at a drive-through restaurant. You can actually eat it while driving without taking both hands off the wheel. (You should probably separate BK's burger shots before you get going, though.)
Posted by RobbieFish at 7:53 PM

Since I posted this, I have also come to appreciate the sliders on Applebee's appetizer menu... especially during Happy Hour, when appetizers go for half price! They're on the same level as Jack in the Box's, except if anything the soft buns are even better, & they come with fries - a very good deal at half-off!