Star Trek: The Next Wave Form

When I was a kid, I loved Star Trek. I knew every episode of The Original Series backwards. I missed only a couple episodes of The Next Generation. My interest in the franchise peaked somewhere in the middle of Star Trek: Deep Space Nine. I still managed to catch most of Voyager and taped every episode of the first season of Enterprise, which coincided with the last season of broadcast TV that I ever watched.

I had been following several TV series when I went cold turkey. I thought it would hurt to miss shows like Enterprise, Alias, and CSI, but it didn't. TV and I had been growing away from each other for a while, I found. I couldn't sit through a commercial break without getting up to do something that would, in many instances, cause me to miss the rest of the program. Moving to Yuma, Arizona - where I would have needed cable to pick up a clear signal from any station broadcasting in English - sealed the deal. I decided it wasn't worth

$49.99 a month to have all those commercial breaks carved out of my life. Time was too precious. Plus, I'm basically a cheapskate. These considerations gave me the boost I needed to discover that music, books, an occasional video, and a bit of webtime could more than make up for missing my favorite TV shows. And eventually, most of my shows went off the air and I didn't care anymore.

Apropos to Star Trek, I found that I wasn't such a die-hard fan of the series that I couldn't live without seeing the remaining seasons of Enterprise. Rather, my enthusiasm moved on to things book-related, chiefly orbiting the phenomenon of Harry Potter. And so you find me writing a blog called "A Fort Made of Books," rather than (for example) "Beyond the Rim of the Starlight."

Nevertheless, when I heard that a new Trek film was coming out - part remake, part prequel, part resetting to Page 1 and veering off in a new direction - I was psyched. I went to see it last night, its opening night at the big cineplex in Affton. And though it does indeed split off on a different timeline from the "canonical" Trek, J. J. Abrams' movie reinvents the franchise with vigor and visual flair.

In the new Star Trek, we see the youthful beginnings of Jim Kirk and Spock. We see what makes them tick. And we also see an older, time-traveling Spock (still played by good old Leonard Nimoy), who remembers things happening differently before a vengeance-maddened Romulan merchant captain changes history. The new Kirk is played by a wiry young charmer named Chris Pine, who seems determined to become the next Harrison Ford; his Spock is Zachary Quinto of TV's Heroes, portraying Kirk's half-Vulcan, half-human "voice of reason" as a simmering storm of emotion barely held in check by a facade of cool logic. 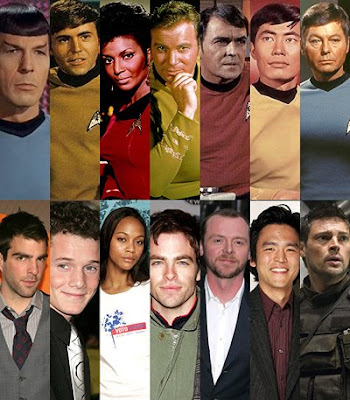 British comedian Simon Pegg provides a lot of laughs as a hugely laid-back Scotty. Zoe Saldana steams up the screen as an Uhura who has a thing for pointy ears. John Cho, late of the Harold & Kumar comedies, engages in sword combat as Mr. Sulu, often seated next to a babyfaced Anton Yelchin as a ludicrously v- and w-challenged Ensign Chekhov. For my money, though, the film's greatest stroke of casting genius was getting kiwi actor Karl Urban to play "Bones" McCoy. It's as if somebody thawed out a frozen clone of DeForest Kelley, only better. He looks, talks, and acts the part, with both endearing and humorous results.

I should also mention that Eric Bana, Winona Ryder, and Bruce Greenwood are also in the film. Australian soap actor Chris Hemsworth makes a brief bid for movie hero status in an early scene as Kirk's father. And Deep Roy, best known as the Oompa Loompas in Charlie and the Chocolate Factory, plays a comically ugly little alien.

The cast pulls off a tough job, reviving the roles of the young crew of the Enterprise as we knew them in the 1960s, and making them recognizable without resorting to slavish imitation. The story also pulls something off, keeping up a fast pace of exciting action, spectacular effects, belly-laugh humor, a touch of sexiness, and the antics of a born rebel with the potential to be the galaxy's Horatio Hornblower - all while reestablishing a lot of characters and their relationships in very short order. It seems to move very quickly until near the end, when it does (I must admit) sag a little; but it left an ex-fan like me fired with ideas and wanting more.
Posted by RobbieFish at 3:55 PM

Best line (btw): "My ex-wife took the planet. All I have left are my bones."