On Friday night, I decided to take a walk, mostly for the exercise. It was a nice, balmy evening in St. Louis, and I figured I would stop somewhere for dinner before turning homeward. My plans changed to "eat first, walk later" when I spotted the Ponderosa restaurant across the street from my apartment complex. After 8 ounces of sirloin steak, a baked potato, a salad, and a roll, I really needed a walk, in spite of the approaching dusk and a wall of storm clouds approaching from the distance. 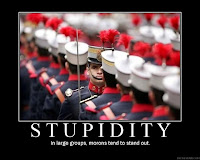 So I walked about a mile down the street. I stopped and browsed a used video store. I realized that Target, just a bit further on, had a better deal on a DVD I was interested in seeing. So I crossed one more busy street, and then the cold front hit. It was a weird feeling. Just as I was entering the Target parking lot, the wind hit me and brought with it temperatures a good five degrees lower. The change from warmth to coolth was striking, but I was soon preoccupied by the realization that the clouds were almost directly overhead and rain was on its way.

My visit to Target turned into a search for a cheap rain poncho. I pulled it on and started walking home through strong winds, thunder and lightning, and a heavy, drenching rain that quickly turned the streets into rivers.

The poncho didn't help much. The flooded curbs soaked my shoes and socks. The driving rain soaked the cuffs of my denim shorts, which then wicked the moisture up into the parts covered by the poncho. In holding the hood over my head, I exposed the poncho's sleeve-openings to the nearly horizontal rain, so that even my well-covered shirt got soaked. If I had fallen headlong into a swimming pool I wouldn't have been much wetter than I was by the time I got home. 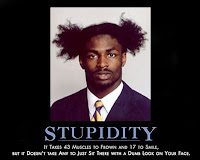 Then something happened that was "me all over." I had to call my mother afterwards, because she loves hearing (and laughing at) my "Robbie stories." And this one was a true classic.

As I approached the front of my apartment building, I dug the keys out of my pocket. Somehow they slipped out of my hands. I heard them go "clink" on the sidewalk, but when I looked down they were gone. I looked up and down the sidewalk, ahead and behind. No keys. I decided they must have fallen into the shaggy grass beside the path.

The lawn was overdue for a mowing, but I soon began to wonder how a set of keys could have gotten so thoroughly lost in it. How far could they have bounced? How deeply could they be hidden by the upstanding green blades? Even though that particular stretch of path was in shadow, and the night was quite dark, shouldn't the keys reflect at least a little light? But I was reduced to kneeling on the path, feeling around blindly in the grass while the rain continued to fall. 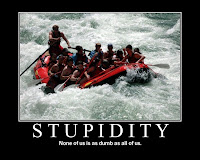 The ground was wet, but firm. They couldn't have sunk into the mud. I splashed through the only nearby puddle and found it keyless. I repeatedly stopped to recheck the sidewalk on both sides of me, then went over and over the same patch of grass, widening the radius of my search. Still no keys.

This was becoming incredible. I sat back on my heels, tilted my head back, and groaned with despair. Then I looked down...

And my keys were sitting innocently on the sidewalk, about five feet in front of me, shining brightly in a pool of light cast by the security lamp above the door of my building. Exactly where I had expected them to be. Exactly where I had first looked for them, and where I had repeatedly looked again. I had spent a ridiculous amount of time splashing in wet grass, feeling around for the brightest and most obvious object in sight.

This is just me all over. It's me, hopeless to spot what is right in front of me until, exhausted from searching, I give up on finding it. It's me, wondering whether the universe has once again borrowed something from me, only giving it back when I've passed from exasperation to fury to impotent grief. It's my fat stupid jerkitude coming into explosive contact with the stupidity of the world. And this exact thing has happened to me before. 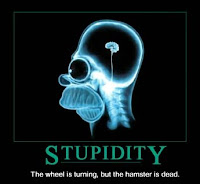 I was in college. One day after class I walked into my dorm room and threw myself down on the couch, tossing my keys carelessly away. As soon as they left my hand - literally before they landed - I was struck by a conviction that my keys were lost. I immediately began turning the room over looking form them. I felt around on the carpet, whose variegated beige color was perfect camouflage for lost keys. After searching to exhaustion in the obvious places, I began inquiring into the bizarre and the absurd. I looked under couch cushions. I opened cupboards and drawers. I emptied my shelves of books. I combed through containers that hadn't been opened in weeks. Still no keys. And it was only when I sat back on my heels with a groan of despair that I spotted them lying between my knees: boldly hiding in plain sight, on the very carpet I had trawled over and over.

Nevertheless, when my keys went "clink" on the sidewalk and then vanished from my visual field, I assumed what had happened was more like the Case of the Keys Lost in the Desert Sand than that incident in college. See, I'm not just a fat stupid jerk. I'm a fat stupid jerk who, in spite of all my experience being one, can't correctly identify what variety of thickness I am suffering at a given moment.
Posted by RobbieFish at 11:30 AM

Email ThisBlogThis!Share to TwitterShare to FacebookShare to Pinterest
Labels: stupidity

Whoever said that confession is good for the soul doubtlessly did not have this sort in mind.