The "Norwegian Style Tackiness" of the Ambassador Hymnal goes on and on... It seems like it might never end! But believe me, we're most of the way there! Here are a few more of these wacky, tacky hymns, which can never sound more out of place than in the sanctuary of a supposedly conservative Lutheran church! 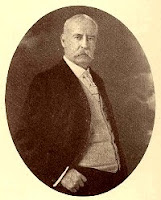 Hymn 551: Standing on the promises by R. Kelso Carter (1849-1926) is another part-song with a long refrain that reminds me of the "Fee, Fie, Fiddly Eye Oh" passage from "I've Been Workin' on the Railroad." Gee, I hope y'all wipe your feet before you go standing on God's promises! For some weird reason, a stanza in Spanish is included, together with the four stanzas in English. I'm sure that, where your token Hispanic convert to Scandinavian pietism is concerned, this makes the whole book worthwhile.

Hymn 552: He could have called ten thousand angels (first line: "They bound the hands of Jesus") is by Ray Overholt (no dates given). At once I am reminded of a far better hymn by an Icelandic author whose brand of Scandihoovian Pietism hails from a much finer vintage. The tune "Ten Thousand Angels" could have done well on Country-Western radio, say, in the 1940s. The words narrate Jesus' passion and death in the language of a tragic ballad. I might enjoy hearing this sung by a glee club, but it simply does not have the dignity (nor the appropriate level of skill) for a congregation's worship. 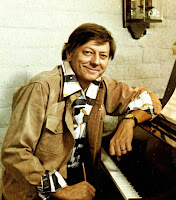 Hymn 553: John W. Peterson's O what a wonderful, wonderful day, by a prolific Gospel songster who flourished in the 1970s. That's "cutting edge" stuff compared to most of this book. The music is for a part-singing chorus, solo quartet, or soloist with backup singers, complete with a last-stanza-only coda ending on a high F. The wonderful day seems to be the day somebody made his Decision for Christ--or, in Peterson's language, "took of the offer of grace He did proffer." This is a blighted form of Reformation theology in which the crucial event is not the cross, but "that wonderful day when at the cross I believed."

Hymn 554: In times like these by Ruth Caye Jones (1902-72) is interesting only because it says the same thing first with second-person pronouns, and then again in the first person: "You need an achor; be very sure your anchor holds... vs. "I need an anchor; I'm very sure My anchor holds..." There aren't any specifics about what makes these "times like these," and though the language of Jesus as and His Word as a solid rock and foundation is Biblical, the rhyme "You need the Bible... O be not idle" seems to locate the value of this anchor in its moral authority. What happens when the times are not "like these"? What if you need Christ or His Word to do more than be a reliable source of information or compendium of values? Where is your rock then? 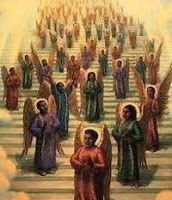 Hymn 555: When the roll is called up yonder (first line: "When the trumpet of the Lord shall sound") is by James Milton Black (1856-1938). Black's tune "Roll Call" is a part song of the "Battle Hymn of the Republic" school, while the words are "When the saints come marching in" warmed over. The first two stanzas cover imagery of Christ's return, the resurrection of the just, and their "home beyond the skies." Stanza 3 brings all this to a point: "Let us labor for the Master... let us talk of all His wondrous love and care. Then when all of life is over and our work on earth is done, and the roll is called up yonder, I'll be there." This last line is all the refrain has for us. So it kind of sounds like all that matters until then is what we do! Musicologically speaking, I think this hymn has a lot to offer as a musical document of the sort of "artificial spiritual" that represents the quintessence of American hymnody. Theologically speaking, I think putting it in a Lutheran worship book was a bad idea.

Hymn 556: If I gained the world is translated from Swedish lyrics by Anna Ölander (1861-1939), and though not quite Norwegian it is a rare example in this book of any real effort to preserve Scandinavian Lutheran heritage. Of course, there aren't very many non-Scandinavians like me who are interested in Swedish folk tunes. I would probably be tarred, feathered, and pelted with hot Kartoffelsalat if I foisted this hymn on my German-American congregation. Though this might be instructive for them. At least then they'll know how I feel when dusty old artifacts of American cultural history are shoehorned into my musical universe. The text, meanwhile, is impenetrably prolix. It spends four very long stanzas imagining the alternative to having Jesus before concluding that having Jesus is better. Deep stuff. 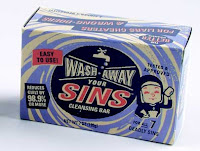 In Hymn 557, What can wash away my sin is the question asked by Robert Lowry, who has already been implicated in at least four tacky hymns so far. The poor man seems to have tied himself in notes, I mean knots, composing the tune "Nothing But the Blood" so that it changed chords as seldom as possible while maintaining a distinctive melodic form. There may be a certain primitive, if not childlike appeal to the music. Or maybe it's just boring and a mite silly. The lyrics are a Sunday School ditty that distorts Paul's "I knew nothing but Christ crucified" to read: "No other fount I know, nothing but the blood of Jesus." I suppose devotionally, catechetically, it could have some use with small children. On the other hand, haven't I already mentioned the evidence that we can feed our kids better?

Miraculously, the Ambassador Hymnal's long streak of tackiness breaks at this point. I don't have the heart to pick on any of the other hymns through No. 562, where I had planned to stop for now. So perhaps the fever has passed and we will soon recover from this book's hallucinogenic heights of camp-meeting campiness!
Posted by RobbieFish at 6:52 PM