On the other hand, we could also talk about the stuff Mom never made at home, perhaps stuff that she would be reluctant to try. Maybe she's better off not knowing you're eating it, either!

On Monday, I jumped the bullet and bit the shark. I was at the new Syberg's in Chesterfield just in time to benefit from their lunch specials, which end daily at 4:00 p.m. So I ordered the lunch-sized helping of Shark Chunks. Yes, kiddies: actual bits of Jabber Jaw! These days a luncheon order of shark comes in at $8.95. The deal includes big house salad -- the St. Louis-style-Italian-restaurant type of salad with piles of shredded Provel on it as well as lettuce, tomato, onion, peppers, and your choice of dressing. I went with House Italian, and it was good. 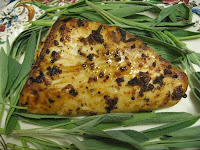 After that was gone, the shark arrived. Whether you order it with "Cajun seasoning" or without, you may be surprised to see not breaded, deep-fried fish nuggets, but big-mouthful-sized cubes of pale-colored, flame-grilled meat. Just when it arrived at my table, I seemed to catch a faint whiff of something fishy. Other than that, it looked and tasted exactly like grilled breast of chicken... except, unlike most grilled chicken breasts, this meat was tender!

The portion wasn't huge. But what my plate lacked in shark, it made up in fresh, hand-made fruit salad. We're talking about whole grapes, strawberry wedges, canteloupe, honeydew, and pineapple cut into chunks of just the right size to compliment the fish. It was all perfectly fresh, tart, sweet, and luscious... except for the honeydew, which as always was a bit tough for my taste (though that didn't stop me from eating all of it)... This portion of fruit took up almost two-thirds of the plate, leaving the smaller end to the shark and a dipping bowl of forced butter. Which was for the fish, you know. Not that it needed it.

I am no longer afraid of shark -- at least, not if it comes out of the kitchen at Syberg's.

Today, my mother remained blissful in her ignorance of my dinner choice at Old St. Louis Chop Suey on Chippewa in the city. Dinner was an order of the best pot stickers in this hemisphere, alongside a type of bacon-and-egg sandwich you can only get at certain Chinese restaurants around St. Louis. Not the pricey sit-down places with linen tablecloths; not (scoff!) the buffet joints; only the Ma-and-Pa kitchens where you sidle up to a counter and order off a menu printed on a photocopier, and where your meal comes to you on a plastic tray. I know of at least five such places convenient to where I live, but I rarely eat there because they either don't accept credit cards, or they charge extra to do so. Today I had cash, so I went to OSLCS and, for maybe the third time in my life, ordered one of the dishes that makes St. Louis unique -- a dish perversely named after a city in Minnesota where no one has ever heard of it -- a dish probably more talked about than eaten, yet available in every neighborhood in this town capable of supporting a takeout-or-delivery Chinese place... the St. Paul Sandwich. 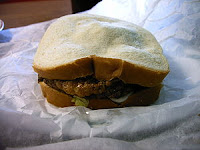 It's really an all-American dish. It's made with soft white bread, just like the generic stuff your Mom used to make your PBJs. The bread is thickly slathered with mayo or a similar white dressing, then layered with lettuce. Iceberg lettuce, nothing fancy. Slices of dill pickle. A couple strips of cripsy bacon. And in the heart of it all, a big thick dollop of fried egg. The only thing about it that makes it possible to imagine this sandwich next to a plate of the hemisphere's best pot-stickers is the minor detail that the egg is fried Foo Young style. Your choice of flavors, too: veggie, chicken, shrimp, beef, pork, or (if you're a big spender) "special." I had the special flavor, which still only cost $3.40. I reckon it has whatever they put in "special fried rice," except of course the rice.

It was a big, fattening, filling, decadent sandwich. It seriously didn't need pot-stickers to wash it down. Though technically it was the other way around; I ate all my pot-stickers before I even unwrapped the thick, white-butcher-paper-covered package that was my St. Paul Sandwich. I'm not crazy, you know. I like the St. Paul Sandwich well enough, but have I mentioned that this joint's pot-stickers are pretty good? The point is, I didn't really need both. Though I didn't need any of the plastic pouches of plum sauce the folks in the kitchen kindly heaped on my tray, I might have enjoyed the sandwich better with the best sauce of all: hunger.

Mom would kill me if she knew. I guess I'd better eat out more often, then. Maybe I'll beat her to it.
Posted by RobbieFish at 7:24 PM

I was disgusted when I read about that sandwich. What a waste of perfectly good egg foo yung! But the longer I thought about it, the more I realized I was just going to have to make one.

OK, it was pretty good... the bacon wasn't really necessary, though, since my egg foo yung was salty enough already. And, OK, I cheated and used whole wheat bread, and skipped the pickles. The idea of putting mayo on Chinese food was weird enough.

I have one of your canned-croissant-dough Runzas(tm) in the oven right now, too... there's some interesting cultural/culinary cross-pollination going on in your neck of the woods!

Wow, spreading the light of St. Louis cultural tradition all the way to Montana! I really feel like an evangelist now!

Just wait till my next food-related post. I'm still trying to decide whether the genre of this thread is "comedy" or "horror" but if a little "how to" slips in, Hallelujah!

BUT, I would sooner skip the bacon than the pickles! I agree, with the salt-pork content of "Special" Egg Foo Young, the bacon doesn't really add much. But holding the pickles?! Total do-over!