My mother works for a state agency in Nebraska. She's been on their payroll for something like 15 years. Her job is emotionally draining, physically hazardous, and constantly on the verge of being de-funded by some idiot in Lincoln, but she keeps at it.

This summer, we put our thinking caps on and tried to think of a way we could spend some quality time together. Mind you, she gets an ample dosage of my youngest brother Jake, since they live in the same town and if she isn't babysitting his 2-year-old daughter, she's babysitting him.

(His marriage seems to be based on that of Stanley & Stella Kowalski. No week is complete without someone getting thrown out of the house, or getting arrested, or going to the emergency room, etc.). And because the rest of her family, except me, lives in the greater Twin Cities area, she spends most of her vacation days there and, as a result, spends as much time with middle son Ryan and his 5-year-old son as any sane person can stand. But what about me? Poor little old "Number One Son" in St. Louis, who hasn't brightened his mother's eyes since Grandpa's funeral in the spring of '08? Hence the hope that we could somehow synchronize our next vacation days and, with the blessing, share a couple of days in the lavish cultural ambience of, say, Omaha.

But here's the crap Nebraska state employees have to put up with. First, in the hope of getting several consecutive weekdays off in the middle of August (the only time I could be spared from a plethora of responsibilities), she had to apply for her preferred vacation days around the end of June and keep her fingers crossed all the way through July. Then, yesterday, she called me with the wonderful news that her vacation days had been awarded... but they were the precise days of the week that would be most awkward for me to get away. She apparently appealed to her supervisor, because she called me today while I was at work and said they had given her all of next week off and could I take my vacation then?

I kid you not. I had to ask my boss, at quitting time on Thursday, whether I could take next Monday through Friday as vacation days. The great State of Nebraska requires its employees to apply for vacation a month in advance: no less and, regardless of how long you've been planning, no more. And yet, for all the time they have to consider the request, they put off their answer so long that the other party involved has to request a week's vacation on four days' notice. Classy! 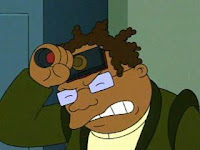 How fortunate I am that my boss is gracious and understanding, that nobody else who works for him is going to be out next week, and that (other than having to write an entire 48-page magazine by the end of the month) he doesn't feel pressured by any insanely urgent deadlines.

I mean, let's be serious. What if someone's once-in-a-decade, paid-in-advance family reunion was on the line? "Sorry, Mrs. Rosicky, we've decided to deny the request you submitted a month ago. I'm sure your extended family will understand. Maybe they can reschedule that four-day weekend in Karlovy Vary for this coming Monday, Tuesday, Thursday, and Friday. By the way, can you take the on-call pager with you?"
Posted by RobbieFish at 4:12 PM