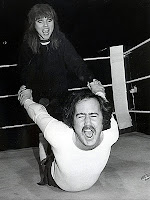 I've arrived safely at home after a five-day trip to Nebraska to see my mother for the first time in two years. I'll have lots to dish on when I have the strength to write it. Till then, consider this picture a taste of things to come.

No, my mother did not beat me up. Why would you even think that?!

Thanks to a story I'm not ready to tell you yet, I have hatched a fantasy grudge-match between my brother Ryan's girlfriend and my half-brother Jake's wife. I would pay to see it happen!

UPDATE: On second thought, I had probably better keep most of this to myself. There are too many ways I can get in trouble for doing otherwise. However, I can't resist blurting out that on Thursday night my half-sister-in-law Celia picked a fistfight with her brother, who is a prizefighter. And although he may have been pulling his punches, when Jake pulled her off him he had a black eye and a chipped tooth to her cut lip. Go Celia!
Posted by RobbieFish at 4:16 PM