As an antidote to all the tacky hymnody I've been slinging around, here's a solid Lutheran number that I think should be more widely known. Click to enlarge the image. You may need to click it again with that plus-sign/magnifying-glass thingy. Print it if you like. Read the words. Hum the tune. Get a bunch of your friends together and sing it. Use it in church if you dare. It's in public domain, and a harmonization is available on request.

This hymn may also be an antidote to the foolishness of calling Paul Gerhardt and his hymns pietistic. I have heard men say this who ought to know the meaning of the words they are using, but who evidently don't. Use of first-person-singular pronouns and emphasis on the words "soul" and "heart" do not constitute pietism. Applying biblical, orthodox-Lutheran doctrine to the individual Christian's life does not constitute pietism. Expressing powerful religious emotions in response to God's unspeakably wonderful revelation is not pietism.

Do you want to see an example of the difference between Gerhardt and pietism? Compare this hymn's reliance on God's certain promises with the iffy, whiffy, waffly, man-centered, experiential numbers exhibited on our "tacky hymns" thread. Those hymns are pietistic. They fixate endlessly on one's conversion, decision, dedication, act of self-surrender. They place faith in the obedience of faith. They draw assurance from flights of fancy and the movements of bodily vapors. They are oriented toward sanctification rather than justification. They espouse a mystical, spiritual communion with God that bears no relevance to the weaknesses of the flesh or to the external means by which God means to be known. They take a lackadaisical approach to doctrine. 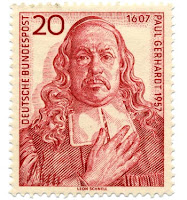 In most cases, they pack the time spent singing them not with challenging, uplifting, faith-forming doctrines, but with a minimum of content, leaning heavily on catchy catch-phrases and sentimental gush.

Can you see the difference? I'm not asking Baptists to agree with me. If Baptist hymns work for them, good luck to them. I am only asking Lutherans to recognize that there's a difference and that, for all who take seriously God's precious promises, our stuff is better. Even the tune makes a difference, suiting itself to the message in both artistic and spiritual verisimilitude.

Are you a Lutheran and yet you think this hymn is awful? Give it time. Changes in taste don't often happen overnight. Let this seed take root and grow in you. After a few more examples (and they will come), look at/listen to/sing it again. You might find that something has changed. Perhaps, by the power of God's Word and Spirit, that something may be you!
Posted by RobbieFish at 8:41 PM