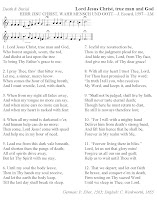 Here is another fine Lutheran hymn whose popularity is less than it deserves. Click on it to enlarge (maybe twice). As you see, it's a funeral hymn by Paul Eber (1511-69), who taught at Wittenberg during the last years of Martin Luther's lifetime and was a friend of Philipp Melanchthon. Can you get more Lutheran than that?

Eber's hymns communicate truths of our Lutheran heritage with an all but childlike directness and simplicity. They include the classic hymn of prayer for help in adversity "When in the hour of utmost need;" the beautiful funeral hymn "I fall asleep in Jesus' wounds;" the Christmas carol "To God the anthem raising;" and the German version of Melanchthon's Latin hymn for St. Michael and All Angels, "Lord God, we all to Thee give praise." The Lutheran Hymnal (1941) has all four of these hymns. The Missouri Synod's newish Lutheran Service Book has the latter two. The Ambassador Hymnal, so rich in products of 19th century Anglophone pietism, has not a single hymn by Eber. It would be absurd to call for a conclusion based on so little data. So just you watch this thread for a while. Perhaps after seeing a similar neglect of other powerhouse Lutheran hymn-writers, we'll be able to "smell the roast," as Luther put it. 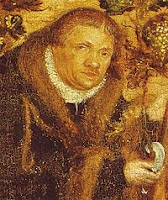 I found the above funeral hymn in several hymnals. Some books edit out about a third of its lines and combine the rest into six-line stanzas. You might say this is understandable, given that nobody wants to sing a twelve-stanza hymn. But I submit that you would be wrong to say this. Reason #1: The hymn would then no longer fit the beautiful, strong, Reformation-era tune that takes its German title from it--although one also finds this tune set to other hymns such as "The royal banners forward go." Reason #2: The lines edited out tend to be those where Christ is speaking His most beautiful promises, and/or those confessing spiritual realities that rankled against Enlightenment sensibility. Reason #3: Sometimes one does need a 12-stanza hymn, such as during a long procession (could happen at a funeral!), distribution of the Sacrament (hmmm... maybe), and to cover for an unscheduled delay (only slightly less likely to happen at a funeral than at a wedding). It can be broken into two or three parts and sung in installments throughout the service. In a large congregation, different stanzas could be sung by men, women, left side, right side, choir, and soloist, besides the full congregation; one or two stanzas could even be read silently during an organ interlude based on the tune.

Reason #4, and for me the clincher: Such a powerful, faithful hymn has far more uses than to be sung in church. It can be read at the bedside of the terminally ill. It can serve as a private devotion for the grieving. It can be learned by heart by the young, so as to equip them ahead of time for the hour of need. It can be handed out as a tract at funerals and commemorations. It can even lend a line here and there to a work of arts and crafts, such as embroidery or decorative glass-etching. It is a hymn that profoundly comforts, encourages, and instructs in the Word of God. It preaches God's promises without argumentative harangue, emotional manipulation, or decision-mongering. It addresses God in prayer rather than some hypothetical, unconverted person. It goes beyond a testimony of faith to deliver the content of faith, the Gospel rather than moralizing Law. In essence, it gets out of the way and lets the Holy Spirit do His work through His message.

The tune is by Johannes Eccard (1553-1611), a composer famous for his elegant polyphonic writing. I am personally unfamiliar with any of his music apart from this tune, but its profound simplicity bears witness to an artist whose acquaintance I should like to cultivate. In only a handful of bars of melody its courage, grace, and emotional depth leave an indelible impression. Like Eber's text, Eccard's tune is frequently redacted, smoothed out, bowdlerized. I am acquainted with at least four distinct versions of it, including one hymnal (just one!) where the last note goes down to a D for a concluding shiver of D-minorish pathos.

At first blush, you may not like it. Used to such heart-warming ditties as "In the Garden" and "The Old Rugged Cross," you may find its rhythms confusing. Its ancient, church-modish harmony may come across to you as depressing. In just the same way, you may object to Eber's text being unduly wordy, old-fashioned, and doctrinaire. But if you're honest, you'll admit that you understand it perfectly. If you're really hurting, you may find that its frankness and Scripture-steeped intelligence offer more specific meaning and comfort for this life than typical pietistic fare, which hardly goes beyond imagining how lovely and painless it will be when we become disembodied spirits in heaven. And if you give it and hymns like it time to grow on you and into you, you may realize as I have that they are, words and music, truly and exquisitely beautiful.
Posted by RobbieFish at 6:05 PM