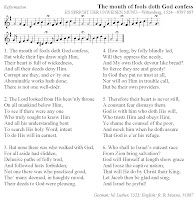 Here is another hymn by Martin Luther that you probably don't know. It wasn't in TLH, LSB, or the Ambassador Hymnal. The text, based on Psalm 14, was paired with this very tune (probably by Johann Walter) in the 1524 Geystliches gesangk buchleyn to which he and Luther were among the chief contributors. That italicized string of gibberish is German for "Spiritual Song Booklet" and it was, ahem, the first Protestant hymnal. Ever. It only had 43 hymns in it and this was one of them. Important at all? Apparently not in the Anglophone world. So far I have found it published in only one, quite elderly, American hymnal. The tune has fared a little better than Luther's lyrics, being set to two other hymns in a more recent Australian hymnal. Read it, hum it, pick it out on a keyboard, try singing it. Then tell me: Why do you think this hymn fell off the edge of the world?

The reasons may be real, but they aren't necessarily just. Perhaps one reason is a perception that Walter's bright, upbeat tune ill suits the hymn's complaining, lamenting tone. Consider, for example, what two hymns the Aussies sing to it (if they sing it at all): "He that believes and is baptized" and an exultant Easter hymn, "O death, where is thy cruel sting?" But the injustice of this excuse is two-fold. 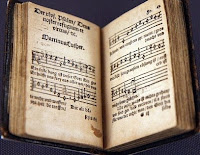 First, though the tune is in what we would describe as a major key, to describe its sound as "happy" is to force an unhistorical interpretation on it. This shows both a misunderstanding of how 1524 ears responded to music and, forgive me, a lack of musical sensitivity. Listen to it again. Notice the plaintive, pleading gestures in the melody, complimenting the asking, appealing nature of the hymn. What it lacks in tragedy it makes up by not tiring you out with an oppressive atmosphere. Most Reformation-era hymns that would be topically categorized as "Reformation hymns" are hymns of lament, many of them relentlessly grim in words and music. Perhaps Luther and Walther can be excused for pairing a comparatively light (not to say insubstantial) tune with the psalm's depiction of rampant evil afflicting the faithful. Isn't there something to be said for subtlety?

Second, and paradoxically in view of that plaintive aspect just mentioned, the tune also possesses a very confident and assertive character. Such a meeting of opposites within one brief piece of music is but one facet of the mystery of the lost craft of chorale writing. Today's very best hymn-tune composers only approach it a small percentage of the time. I have studied it throughout my adult life and I still can't put a better name to that fascinating, elusive quality than Peter Schickele's "je ne sais quoi." 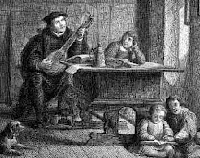 ore on topic, however, this musical robustness suits the character that Luther exudes in most of his writing, including this hymn. Asking, appealing though it may be, neither Psalm 14 nor Luther's paraphrase is the type of hymn that whines or swoons or flies into a flutter over the wickedness of the world. It is not just a matter-of-fact, by the numbers psalm paraphrase; it is a hymn with a definite and daring purpose. And that purpose is to pull the nose of the powers and principalities of the political world, even of the established church; to denounce them as oppressors of God's people; and to defy them to do their worst, because God is on our side.

I have observed a trend that one can trace through dynasties of hymnals put out by various synods, conferences, and councils. When the Synod (or what have you) is strongly engaged in contending for the truth, when the bloom of its first love is still fresh, and when the story it tells about itself still has to do with a lonely pilgrim journeying on the road of uncompromising, unshakable conviction, the hymns it associates with Reformation celebrations will be somewhat like this. For that church knows that truth is always at war with error, and that the church cannot long fight on the right side of that battle except with God's powerful aid. Later, complacency sets in and the Synod becomes a Denomination, an institution, a corporation focused on its own success. And so the "Reformation" section of its hymnal gradually evolves into so much triumphalistic hoopla in which the narrative says: "Mission accomplished." Or almost accomplished;

just send us the deed to your home as a living trust and we'll see if we can't finish the work that Christ began! That is the trajectory that has led the Missouri Synod, for example, from the early-twentieth-century Green Book that featured this hymn to such present-day substitutes as "Lift High the Cross."

I think the time is ripening toward the point where the faithful church will rediscover a need for the classic lament-type Reformation hymn, or something like it. The eagles are gathering. The stench of the carcass is getting noticed. Hymns like this will become more and more relevant as the faithful contend with the deepening corruption of society and the apparent vulnerability of Christ's Church. The more our experience jives with the situation described in Psalm 14, the more we will need the encouragement of its concluding lines: "God will Himself at length show grace and loose the captive nation..."
Posted by RobbieFish at 8:03 PM