This morning, when I was too restless to stay in bed, I poked around at Borders-dot-com and had a little book-buying spree. Addiction is terrible. I need help!

With the help of a coupon/promotion code for 30% off the highest-price book on my order, I managed to scrape together 5 books for under $38. Plus, I saved shipping and handling by having my order shipped to the store closest to where I work. So, while I would have gotten lower prices if I had ordered used copies, I probably saved big-time on postage.

I know you're dying to find out what books I ordered, so I won't keep you in suspense any longer. My first pick was Dragon and Liberator, the final book in the "Dragonback" series by Timothy Zahn, currently available online only for $5.99 in paperback. Then I snapped up the paperback edition of Queste, the latest from Angie Sage's "Septimus Heap" series, due to be released on July 1 -- just in time for my order. 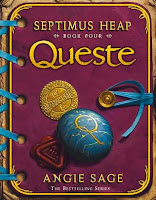 My third selection was The Hour of the Outlaw by Maiya Williams, the third book in a kids' time-travel series that I have enjoyed so far. Fourth was Terry Pratchett's Johnny and the Bomb, which I am embarrassed to have to order after having picked a used copy of Johnny and the Dead online, only to realize that I already had it and was still missing this part of the "Johnny Maxwell" trilogy.

And finally, I sprang for the hardcover of Jenny Nimmo's Charlie Bone and the Shadow, the latest installment in the "Children of the Red King" series. I have always begrudged the cost of hardcover editions, especially new and at full price, but the 30% promo code eased my pain. Besides, there isn't much choice, since this is one of those series that never seems to come out in paperback until the very last book is in print.
Posted by RobbieFish at 4:33 AM