Tested at the Bus Stop 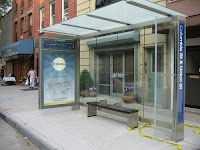 On the curb outside the bus station where I caught my ride home this afternoon, an odd-looking man was shuffling around. He didn't seem to be able to stand still. He had a big, silly grin on his face. He kept muttering to himself, and frequently shifted position in a way that seemed, by turns, like laughing, dancing, and spastically twitching. He could have been a four-year-old needing to go to the potty.

Only once did I get close enough to him to hear what he was saying to himself. He called out to me with this interesting observation: "I just realized that twelve plus five is twenty-two!"

I'm not qualified to make a diagnosis here, but I suspect this man was mentally ill.

I spent the rest of my time waiting for the bus, thinking about what if anything I could do for him. From past experience working with the mentally ill, I understand that the cops could pick him up and take him to the emergency room, if someone phoned in a concern about the man's behavior. Then he could be placed under court-ordered medical care.

But this could only be done on the grounds that he was a danger to himself or to others, and/or "persistently or acutely disabled" -- essentially, unable to take proper care of himself. And I couldn't see any harm in this guy. He seemed to be in a happy mood, though perhaps a little too happy. His remark about 12+5=22 was a classic sign of disorganized thought. But he wasn't threatening anybody; he wasn't running out into traffic; and he appeared to be waiting for a bus -- so, presumably, he could at least handle public transport. I decided to wait and see.

Well, the bus came and I got on. Other passengers boarded. The strange man didn't come aboard. Perhaps he wasn't functioning so well after all. Maybe that disability clause really did apply to him. By the time I realized it might actually be my business to do something about it, I was motoring away. Obviously I don't know where he went from there. Hopefully he will get compassionate help.
Posted by RobbieFish at 5:40 PM

Email ThisBlogThis!Share to TwitterShare to FacebookShare to Pinterest
Labels: health