Soviet composer Dmitri Shostakovich wrote his Fifth Symphony in 1937, at a time when the Communist Party was cracking down on the arts. If his "memoirs" are to be believed, the composer wrote it in the midst of a stifling atmosphere of anxiety and distrust, prepared at any moment to hear a knock at his door in the middle of the night and never to be heard of again. The avante garde experiments of his previous works, including the Fourth Symphony and the opera Lady Macbeth of Mtensk, were sharply condemned. Shostakovich hastily withdrew these works, which were never published or performed until long after Stalin's death, and continued to write many of his most personal works "for the desk-drawer."

One can imagine that he went through some soul-searching before he came out with this Fifth Symphony. It communicates in a much simpler and more directly approachable idiom. Party apparatchiks accepted it as "a Soviet artist’s creative response to justified criticism." Many in the public received it, with its ironic touches and clever allusions to Russian folk tunes, as an expression of all they suffered under the repressive Soviet state. The debate as to which meaning Shostakovich intended is endless, as is the debate whether this Symphony marks the end or the beginning of his creative genius. You can read more about it here.

For my part, however, I would say that this is one of the very first pieces of 20th-century music that I ever truly loved. It drew me in from the first time I heard it. Together with the Third Piano Concerto by Sergei Prokofiev, it sparked an interest in Soviet music that has not waned for over 15 years. Emotion surges through it like power through a high-voltage line - though it never comes across as sentimental. Bitterness, irony, grotesquerie, and terror make themselves felt in a way I never expected to find in a classically-structured symphony. Harmonies that stretch the limits of traditional tonality beyond the breaking-point exist, somehow, within a sound that the ear perceives as tonal. Melodies that, by themselves, would sound like random notes thrown scattershot across the musical canvas, 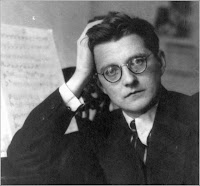 when combined with said harmonies sound like intelligible themes. Ugliness and beauty have met together; modernity and classicism have kissed each other. It's an amazing revelation.

Regardless of how one interprets the character and work of Shostakovich, or formally analyzes this symphony, here is my guts-forward take on it.

The Fifth Symphony opens with a roughly 15-minute movement marked Moderato. It begins with a harsh statement of a main theme. Then more softly, and in a light texture, more material is unfolded in a musing, conversational way. At about 4:15 Shostakovich begins to toy with the initial theme in a passage noted for its dreamlike delicacy. The overall mood is a grayish one, occasionally relieved by a shaft of sunlight. The piano's entry around 7 minutes in signals a new section filled with increasing tension. The music grows faster, louder, more contrapuntal, driven by more violently insistent rhythmic patterns, and tinted with harsher tone-colors. Around 9:00 the percussion joins in what has become a ghastly march. From this point until about 10:30 the music steadily ascends to an anguished climax, topped by a drawn-out passage mostly in unison. It takes over a full-minute to return to the simpler mood of 4:15 ff., now even sweeter and sunnier than before. The mood turns hesitant and mysterious around 13:00, when a solo flute plays an upside-down version of one of the main themes. A solo violin is heard to lovely effect in the final paragraph, in which (most unusually) a celesta has the last word in this unique yet wholly convincing movement.

The short second movement is a scherzo-like Allegretto. One might note something sinister about it from the very beginning, especially in some passages of a more martial bearing. These alternate with more intimate, innocent moments. One might choose to imagine in these notes the portrait of a good soul being forced to march to the drum of an all-powerful state. 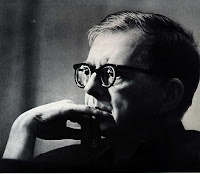 Surely there must be some significance in the fact that the carefree melody first introduced by the solo violin comes back, late in the movement, in a "squashed" variant. The whole movement continuously unfolds memorably quirky tunes that strike me as entirely characteristic of Shostakovich's style, right up to its bruisingly hard conclusion.

Movement III, a Largo quite as long as the first movement, begins tenderly. It's like a midnight meditation. The strings command the first three minutes, after which the harp and two flutes bring things down to a really personal level. The music surges toward a passionate climax around 5:00, then falls back to a searching oboe solo against an anxious string background. A clarinet soloist takes over at about 6:45, then a flute a bit before 8:00. If you have ears to hear them, you may detect fragments of themes from the first movement in all these musings. Around 8:30 there begins a remarkable passage scored for the low winds, like a word of defiance whispered at the back of one's throat so that no one might hear it. By 10:00 the anguish has heightened again. Note the passage for low strings beginning half a minute later. It takes a couple minutes to return to a quieter atmosphere, albeit one disturbed by uncertainty and profound loneliness. The harp and celesta make notable contributions at the close of this heartbreaking testimony to private tragedy.

The finale, marked Allegro non troppo, opens with a sinister martial theme, and within moments the word "frantic" becomes the best adjective to describe it. Motor rhythms, imitative treatment of theme fragments, and impressive contributions by the brass choir and percussion make this a real blockbuster. Now and then, just for a moment, it sounds a bit like a score to a Spielberg movie. But then, around 3:30 for instance, a tragic perspective reasserts itself. The horn theme beginning a little before 4:00 has all the nobility of a heroic portrait, but the music that directly follows it sounds like so much head-shaking, hair-pulling 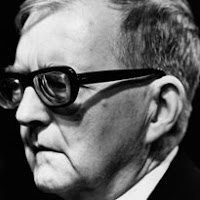 , and questioning whether one's soul can be saved. A sense of midnight musing, reminiscent of the slow movement, comes around the 6-minute mark. Quietly, lightly, Shostakovich mulls over the thematic material. Sudden pause - distant drums - deeply ominous music, beginning in the depths of the wind section - the martial theme heard in a slow, deliberate guise...

Now behold what I think is the passage most ripe for allegorical interpretation. As the martial theme begins to build up again, the strings reenter the scene, evidently with no other aim than to drown it out. It's like watching someone being airbrushed out of a photograph, or a voice being drowned out by someone covering his ears and insistently singing, "La, la, la!" By 10:45 the music has risen to a cathartic finale of perhaps unbelievable triumphalism.

Is this the triumph of the state blotting out politically out-of-favor art works and artists? Or is it a then-unrealized dream of the oppressed Russian people obliterating the Stalinist orthodoxy of 1937? There will never be solid agreement on this, nor on whether this symphony's ending is truthful. But it's powerful, unforgettable, and, in a unique and persuasive way, beautiful. If you but hear it out, you may begin to think differently about the art and music of the 20th century.

EDIT: Here is a video of Michael Tilson Thomas conducting the second movement of this symphony at the BBC Proms. Enjoy!
Posted by RobbieFish at 7:01 AM