I'm looking for a name for whatever I just cooked tonight. It isn't just meatloaf, because it has a lot of veggies in it. It isn't vegetarian meatloaf, though, because it does have meat. "Omnivore Meat Loaf" and "Untitled Hot Food Thing" don't seem to do it justice either. 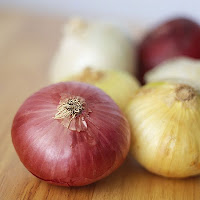 Maybe we should call it "Gleeg" and get on with it.

It started with a lot of impulse shopping in the produce section at my local super-dupermarket. I didn't really know what I meant to do with it all until I spotted a bottle of chili sauce on a shelf. So I added a couple pounds of ground beef to the cart, and brought it all home.

First, I chopped up a big, sweet, Vidalia onion. I didn't make any effort to chop it particularly fine, or to make the pieces uniform in size or shape. I did the same thing with three stalks of celery, one large carrot, and two bell peppers (one orange, one yellow--just for interest; the color doesn't really matter). I combined all these veggie chunks in the bottom of a big, deep-dish lasagna pan. Then I added some seasoned bread crumbs, cracked a couple of eggs into it, poured in about a third of a bottle of chili sauce, and stirred it all around with a fork. Finally, I smashed it all into the ground beef, mixing everything as well as I could and forming it into a lump with space all around, between the lump and the sides of the pan. I emptied the rest of the bottle of chili sauce over the top, spread it around with the back of a spoon, and sprinkled a little sage over it before popping the pan into a 350-degree oven.

An hour later, more or less, I shut the oven off. I left the Gleeg inside, however, because I was talking on the phone with my Dad & couldn't be bothered with it for the moment. All in all it probably spent two hours in that oven, 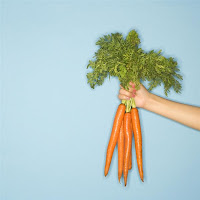 but only half of that with the gas on. So it was just the right temperature to eat when I got around to it. After having my fill, I was able to put up three manly-sized servings for later.

It's an interesting concoction. It can't at all be confused with meatloaf. There's way too much veg in it. In fact, the bite-sized chunks of carrot, onion, and so forth seemed to take up almost half of the food by volume. They were tender but not mushy; enough firmness remained in them that you could really sink your teeth into them. Each bite of pepper or onions caused a small explosion of tasty juices inside the mouth. Slices of the Gleeg didn't stay together quite as well as the traditional meatloaf, but the overall flavor and texture were satisfying. And I felt almost virtuous -- having my meatloaf and vegetables together. It was like a stew you could cut with a knife. Or a casserole you can serve by the slice.

EDIT: It turns out that the word "Gleeg" is part of a phrase which, spoken aloud, is supposed to cause the world to explode. I suppose we'd better rule that name out, then. Any other suggestions? (For similar reasons, we should also avoid Ämälän. If you know what I'm talking about, I love you.)
Posted by RobbieFish at 10:21 PM