The Mechanics of Swing

Get a load of this cool video of a 16-year-old baseball prodigy from my native city, Las Vegas NV. Bryce Harper has been on the cover of Sports Illustrated and, if his joints hold up for a few more years, it won't be for the last time. He'll be a top-seeded draft pick the moment he decides to go pro. By all early signs, he could be the Tiger Woods of baseball - a sport that, frankly, needs one. 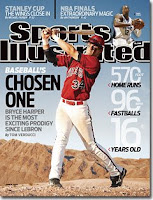 What most intrigues me about this video is what it shows about the mechanics of swing. You see this kid hitting no fewer than twelve home-runs, including an amazing 502-foot one into the opposite stands. And every time he smashes a ball into the stratosphere, the way he physically prepares for it and the way he follows through are worth watching. It's like watching a spring being bunched up and then released. Considering his build, there must be an awful lot of force behind those swings.

Notice especially how he turns his legs during the swing. First his right leg turns inward as he winds up. Then his left leg pushes towards his right as his whole body unwinds in a powerful swing. It often ends with a little stumble as he slightly overbalances. As an organist, I'm familiar with the "thighs together" configuration. It's a position of enormous tension and potential energy. Mechanically speaking, by pulling his right leg inward he is both shifting his center of mass backward and coiling his body-spring, preparing to release a huge amount of muscle-energy. Then, during the swing itself, when he turns his left leg inward, it is part of a general movement toward the ball. It's as if he is pushing his full weight forward with an explosive effort, and channeling it into the swing of that bat.

Bottom line: I wouldn't want to be a fly on that ball.
Posted by RobbieFish at 9:17 AM

Email ThisBlogThis!Share to TwitterShare to FacebookShare to Pinterest
Labels: sports