Before our master class on "Reading a Symphony Like a Good Book" moves on to Assignment 4, let me make up for the long delay in finishing Assignment 3. How? With a bonus, extra-credit look at Beethoven's Second Symphony!

Ludwig van Beethoven completed his Symphony No. 2 in D major in 1802, two years after his First Symphony and two years before the Third ("Eroica"). The Second is traditionally regarded as one of the last pieces in Beethoven's "early period," before he developed his own distinctive style. The First Symphony, for example, sounds somewhat like a late symphony of Haydn -- though it is stamped with Beethoven's unique, bluff charisma.

The Third, on the other hand, supposedly inaugurates the Romantic symphony, in contrast to the Classic period represented by Haydn.

But it would be misleading to say that, with Eroica, the mature, romantic Beethoven suddenly explodes into being. Rather, the Second Symphony is a kind of "missing link," an intermediate stage in the evolutionary process. Drawn in larger proportions, it clocks in at 35 minutes: the length of the Fifth Symphony. It is also packed with colossal energy, underscored by the use of a muscular scherzo in the third movement rather than the fashionable minuet. In its harmonies and dramatic gestures, it heralds the earthshaking advent of Eroica. And lest we be misled by the absurd rumor that only Beethoven's odd-numbered symphonies, from No. 3 on, are worth listening to, the Symphony in D is one of the maestro's most lively, memorable, and enjoyable works. I became acquainted with it at an early age, and now whenever I hear it I feel the pleasure of catching up with an old friend.

The long first movement opens with a "very slow" (Adagio molto) introductory passage, lasting some 3 minutes. At first loud, unison "Ta-das" alternate with lyrical phrases. A more playful, inventive passage follows, allowing both the harmony and the rhythm to go through various evolutions, before a grand statement similar to the first theme of the Ninth Symphony. From this point on, the material in the slow intro directly foreshadows ideas in the "fast, spirited" (Allegro con brio) movement to come.

After a downward rush, we hear the first real theme of the symphony, outlining the tonic (D major) triad. The mirthful mood turns dramatic during the transition to the almost comical A-major second theme, in which again triadic outlining figures largely. The remainder of the exposition is a long and emphatic codetta in which Beethoven fashions a sense of space and grandeur around his seemingly trifling themes. After all this is repeated, the development veers into a minor key and a rigorous-sounding fugato. After a brief break to anatomize the second theme, it returns to these minor-key rigors all the way to the recap. This time, the transition to the second theme sounds less threatening, more affirming. The second theme, of course, comes back in D instead of A (as is right and proper in a sonata's recapitulation). The codetta leads effortlessly into a coda in which we hear echoes of the first theme before a glorious, climactic finish.

The Larghetto second movement, in A major, is brim-full of Beethoven's most gorgeous melodies. Again, in its larger-than-usual proportions, it belies its position among Beethoven's "early works." Rich in contrasting ideas, it covers a range of expression from soulful lyricism to rustic exuberance. These ideas unfold in a sequence that, over the course of many hearings, has come to sound inevitable to me; I have been known to hum along from one end of the piece to the other. 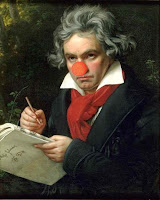 In the Scherzo, Beethoven leaves behind the Minuet's refined manners and adopts the jaunty, jumpy groove of the Austrian peasantry, with lots of heavy stomping, high-kicking, and echo effects. The middle section, analagous to the classical symphony's Trio, features a quartet of wind instruments (oboes and bassoons), assisted by the strings and horns in a gentle dance punctuated by loud chords.

The "very fast" (Allegro molto) finale begins with a comical sound, like the honking of a clown's nose, and a theme like the audience laughing. Thereafter, noble themes alternate and/or combine with rude noises and string passagework. The development shows us a minor-key side of these ideas, culminating in an impressive passage in unison (give or take nose honks). The brighter side returns for the recap. This, in turn, leads to a coda comprising nearly one-third of this quick movement, and an explosion of mirth worthy of a comic-opera finale.

EDIT: I've just been to YouTube, where I found this video, below, of Herbert von Karajan conducting Beethoven's 2nd. The comments on the page where I found it are enlightening. Apparently I am not alone in spotting the similarity between the descending figure in the slow intro and the main theme of the 9th Symphony. Others have given it more meaning than I initially did. It's worth a second thought. Perhaps the descending D minor triad does represent fate in an arc spanning most of Beethoven's career; perhaps the first movement's final decision in favor of D major represents the triumph of hope over despair; and perhaps the development of this motif indicates that, in 1802, Beethoven was much more optimistic in the face of his cruel fate (deafness) than he would be in 1824.I am finally compelled to observe that I don't like Karajan's conducting much. His results are admirable in their precision and consistency. But his methods are very cold, his mien woodenly serious if not severe. It does not look as if he is enjoying himself - or, if he is, it is on a strictly rational level. And as he keeps his eyes closed throughout the performance, one gathers that he is concentrating on something unreachable by the rest of us; there is no sense at all of an experience shared with the players. Oh, well. If I had listened to it with my eyes closed, I wouldn't be complaining...except that I thought the Scherzo sounded too polite.
Posted by RobbieFish at 11:37 AM