I hate it when I have the first and last book of a trilogy, but can't find the middle book. Sometimes I don't realize this until I am already in the middle of reading it. Sometimes it means I don't dare start reading the trilogy until I can remedy the matter. And sometimes it takes years to complete the set.

Today I placed a used book order online. Two out of five of the books I ordered are the second book in a trilogy of which I already own the first and third book.

First there's Olivia Kidney Stops for No One, originally titled Olivia Kidney and the Exit Academy, by Ellen Potter. It goes between Olivia Kidney, which I have already read, and Olivia Kidney and the Secret Beneath the City, which I recently picked up for peanuts. I had tried to get both sequels, but unfortunately my order for the second one was canceled when the supplier realized it wasn't in their inventory. So I'll have to wait a bit longer to find out what happens next! [EDIT: There is apparently also a book titled Olivia Kidney Hot on the Trail, but I don't know where it fits into this series. As far as I know, it might be an alternate title for one of the other books. This series is so confusing!]

Then there's Johnny and the Dead, book 2 of the "Johnny Maxwell Trilogy" by Terry Pratchett. I have owned book 1, Only You Can Save Mankind, and book 3, Johnny and the Bomb, for ages; only I haven't wanted to read them without book 2 in hand. Now I can finally crack this series open!

But that's not all. I also bought Arabel's Raven by Joan Aiken. It's not part of a trilogy as such. It's simply the first book in a long series of stories about a little British girl and her pet bird. I found out about it while reading one of the later books in the series, Arabel and Mortimer. 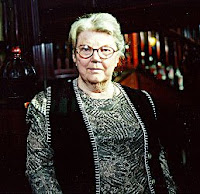 Though I may not hunt down every title in this series - some of which seem to recycle previously published material - I felt that catching the beginning of the series might be worthwhile.

Plus, I finally purchased the last book in Michael Lawrence's Withern Rise trilogy, titled The Underwood See. I had long since read the first two books, but while I waited for Book 3 to come out in paperback, all sign of it (hardcover included) disappeared from the local bookstores. It occurred to me that I could get it used or not at all. And really, I can still feel the "hook" at the end of book 2, Small Eternities.

The fifth book on my order was another Joan Aiken title, The Shoemaker's Boy. I just found out about it while going through Fantastic Fiction's list of titles by that author. There are plenty of other promising titles on that list, but one has to start somewhere, and this looked like a good starting place to me.
Posted by RobbieFish at 2:44 PM