Last night I visited the Pixar digitally-animated film Up. Featuring the vocal talents of Ed Asner, Christopher Plummer, and Delroy Lindo, it delivers yet another funny, touching, goofball family movie from the animation studio that thought up Toy Story. 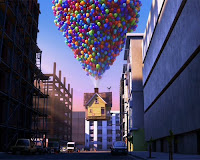 As the movie opens, a stout little boy named Carl Fredericksen is eagerly inhaling newsreel footage of his hero, Charles Muntz, a wilderness explorer who claimed to discover a unique species of bird in the remotest reaches of South America. Shunned by the scientific community, Muntz flew off in his airship Spirit of Adventure, vowing never to return until he could prove his claims. The story fires young Carl's imagination, and cements his friendship with a likeminded tomboy named Ellie. Carl and Ellie promise each other to follow Muntz to Paradise Falls and adventure.

A fast-paced, tear-jerking montage informs us that Carl and Ellie got married and grew old together. Their plans to travel and see adventure are always put off for practical reasons. Now Ellie is gone, and all Carl has of her is the home they made together on the site of their childhood clubhouse. Thanks to a greedy developer and Carl's gruff temper, even that is about to be taken away. So on his last legal night in the house, Carl hatches a plan to fulfill his promise to Ellie at last. Using an improbable number of helium canisters and an even more improbable number of balloons, Carl floats his house right out of the city and steers a course for South America.

Unintentionally, Carl brings with him a local Wilderness Scout named Russell - a pudgy boy who desperately needs a father figure in his life. When they land near Paradise Falls, they begin a strange journey, towing a floating house behind them. They get mixed up with an endangered species of bird, a pack of highly trained dogs with special collars that translate their thoughts into human speech, and a surprise (?) villain. And they have an adventure with all kinds of hilarious pratfalls, daring stunts, sudden reverses, and an aerial battle that gives new meaning to the word "dogfight."

I felt a bit teary a couple of times during this movie. I also barked out some very creditable belly-laughs. The audience, in general, was with me. So Pixar triumphs again with another demonstration of their knack for bringing depth, detailed surface texture, agile movement, and emotional engagement to a cyber-animated entertainment. Plus, the film comes packaged with the obligatory Short Feature. This one, Partly Cloudy, whimsically deals with the idea of storks delivering babies. The whole Oscar category of "animated short subject" seems to exist for the extras that come with Pixar films and those of their near competitors.
Posted by RobbieFish at 7:53 AM