It happened while my car was in the shop for repairs. I had to take a bus and a train to work, and because of the transit schedule, I was obliged to show up a whole hour before my scheduled shift. I was just opening my locker to get out the book I was going to read in the break room, when a voice on the public address system announced that the premises were being evacuated. 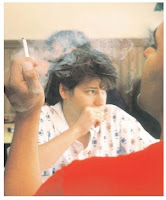 It was no biggie... just a gas leak... Everybody had to leave the building. The Fire Department and the gas company did their thing. Then they let us back in, after about half an hour of sitting around, gossiping in whatever shade we could find. Those who had 'em, smoked 'em. It was like everyone got to take a 30-minute smoke break at the same time. Only, just my luck, I wasn't on the clock.

It was an odd event, anyway. A rare chance to join in fellowship with most of my coworkers. And I picked a good seat to watch from. I would just like to suggest that, the next time somebody decides to rupture a gas line where I work, they wait until I'm on the clock...
Posted by RobbieFish at 10:00 PM