Keelie Heartwood wants her mother. But it's no good. Mom has died in a plane crash, leaving her to be raised by her estranged father Zeke. It's a confusing change. Brought up exclusively by her ambitious, Los Angeles lawyer mom, Keelie is used to a privileged urban life, plans of going to law school, and being careful around trees - due to a rare allergy to wood, which since her childhood has caused her to hallucinate about seeing fairies. Now she is expected to live in the middle of a forest with the dad she barely knows, moving from one Renaissance Faire to another while he sells handcrafted furniture and attracts women like nobody's business.

Keelie doesn't plan to stay long. She has a plan to get back to L.A. and stay with her fashionable, preppie friends. But first she has to deal with one disaster after another, while her weird hallucinations resurface. Maybe the hardest part is coming to grips with the fact that they aren't hallucinations: Keelie can actually see fairies, tree spirits, and other magical things. She can sense the history of a piece of wood, work earth magic, and talk with trees. She has all these powers because she is half-elven; she will need them because an evil force prowls the woods around the High Mountain Renaissance Faire, a force that even her tree-shepherd father can't fight alone. 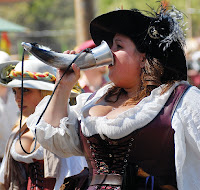 This first book in the Faire Folk Trilogy introduces us to the present-day heirs of Tolkien's elves. Evidently when they sailed west from Middle-Earth, they arrived in North America; and there they live to this day, masquerading as itinerant actors in period costumes. Not all of them are good, however. Some of them have unleashed a creature that may have sounded cute when you read about it in Harry Potter and the Prisoner of Azkaban, but which proves decidedly nasty here.

But Keelie doesn't face it alone. She is strengthened by her growing acceptance of her father's love, her healing sorrow for her mother, the watchful eye of a too-smart-by-half cat named Knot, the friendship of a goth girl and a dwarf, a romance with an elf prince named Sean o' the Wood, and the faith of the trees. Meanwhile, your reading pleasure will be heightened by Keelie's growth as a character, her eye-opening experiences behind the scenes of a Ren Faire, and her fun sense of wit and irony. Things don't go smoothly for her; she even has some rough spots to work out of herself. But her sudden immersion in a pool of timeless magic within the modern world is as bracing for her as delightful to us.

Into the Wildewood
by Gillian Summers
Recommended Ages: 14+

Keelie and her father Zeke Heartwood have moved on to the Wildewood Renaissance Faire in upstate New York, but the magical world of elves, fairies, and tree spirits has moved with them. In this second book of the Faire Folk Trilogy, today's descendants of Tolkien's elves find themselves posing as jousters, princesses, and tradesmen for the entertainment of paying guests. But Keelie is something in between: half-human, half-elven, just beginning to come into her magical powers and learning how to use them. And when she overdoes it as a paying guest - making a thoughtlessly extravagant purchase - she is also forced to become a Rennie, donning a succession of costumes and ill-starred roles as this year's Jill of the Faire.

While her trials and failures as a faire worker are amusing, her lastest challenge as a tree shepherdess isn't. The trees surrounding the Faire are sick and angry. A nearby power plant is poisoning them, and someone is using dark magic to harm them even more. The unicorn guardian of these woods is dying. And now the other elven Rennies are getting sick, including Zeke. It's going to be up to Keelie to save everybody again, but she doesn't know what to do. Plus, she has to balance all this with the arrival of her two best friends - friends from entirely different worlds, but who for better or worse will be caught up in the adventure with her.

Here is a fantasy for your imagination to dwell on the next time you visit a Renaissance Faire. Suppose some of the actors aren't acting; suppose there is real intrigue and magic between them; suppose the drama that you don't see, playing out behind the scenes, is even better than the public show. There may be something to the hippie earth-magic and Luddite tree-hugging seemingly espoused by some Rennies... there may even be something beyond that, as distinct as the magic of Harry Potter's world from that practiced by Wiccans and pagans.

In this book you meet both kinds - human and elven magic users - and some are good, others evil. You witness the gradual transformation of an already compelling character as she grows into her powers and purpose, and as it begins to look like she may change the magical world: a world that only half accepts her because she is also half-human. You will enjoy the human side of her, and see how far she has grown since she discovered her elven side. And you will squirm like a worm on a hook as she makes every possible mistake leading up to the book's powerful climax. Then you'll squirm some more, since you'll have to wait until June for the final book of the trilogy, The Dread Forest's Secret. Visit the author's website for more information - though it may or may not mention that "Gillian Summers" is really the writing team of Berta Platas and Michelle Roper.

By page 10, I realized that I loved the characters in this book. By page 65, I thought it might be one of my favorite books ever. And though, further on, I felt it might have moved at a brisker pace and involved less quarrelsome chatter between its five young heroes, I never lost the sense that I had stumbled upon a truly fabulous story. This is a book young book lovers will love, a fantasy about a fantasy that comes to life, a mystery about a murder that hasn't happened yet - we already know who does it, but hope that he doesn't. It is a book that, according to its author, has the ambitious mission of reminding grown-ups of the pleasure they took from the books they loved best as children, while leading young readers to still more exciting discoveries.

Can one book do all that? Not likely. It takes a trilogy at least! So it's nice to know that The Secret Country is also the title of the trilogy that begins with this book. What's nice about that becomes increasingly clear as this book nears its end, with lots of mysteries yet to be cleared up, dangers to be faced, and magical tasks to be completed before the children can go home.

Who are these children? They are cousins who have spent every summer, until now, playing make-believe together on a Pennsylvania farm. This summer, though, Ruth, Patrick, and Ellen have moved to Australia. Meanwhile Ted and Laura are stuck in Illinois, visiting another set of cousins with whom they do not agree.

Nothing suits them quite like the Secret they used to share, the game in which they invented a whole medieval world stocked with pageantry, courtly language, palace intrigue, magic, assassination, and war. How convenient it is when each group of siblings finds a magic sword that brings them to the very same, and very real, Secret Country!

Or perhaps it isn't so convenient. Now that the kids find themselves forced into the roles they created for themselves, surrounded by not-so-imaginary folks they really care about, it isn't so easy to follow through on the script they wrote. Princess Laura is supposed to be an excellent rider and dancer, but the real Laura is afraid of horses and falls down a lot. Lady Ruth is supposed to be a journeyman sorcerer, but the real Ruth knows no more magic than you or I. Prince Edward isn't supposed to know what happens in advance, but Ted knows too well - and he doesn't want it to happen.

Even while the children bicker about whether or not the world they find themselves in is real, events are marching toward foreseen and unforeseen dangers. Nobody seems to notice that the kids really aren't who they're supposed to be, but keeping up the charade is exhausting. Is it all real? Does magic exist or not? Can they change what's going to happen? And why are things happening that they didn't plan on? These mysteries are enough to keep five ordinary kids tied in knots. Throw in a couple of scheming villains, the brewing threat of another war with the fabled Dragon King of the south, the discovery of rings of power and other magical items, an unforgettable encounter with unicorns, and other surprises, and you have an adventure with as many thrilling facets as you can desire.

Wrap yourself in this book, and it will close around you and make the outside world disappear. Better could not be said of any young-adult fantasy novel - except, perhaps, that there is more to come. The trilogy continues with The Hidden Land and The Whim of the Dragon. After reading this first book, I have upgraded my plans to read the others to "Top Priority." Other titles by this Minneapolis-based author include Tam Lin; Juniper, Gentian, and Rosemary; and The Dubious Hills, which seems somehow related to this trilogy. You can find out more about Pamela Dean, a.k.a. Pamela Dyer-Bennet, at her website.
Posted by RobbieFish at 10:12 PM