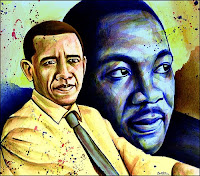 ...which is a very timely sentiment, but not a Lutheran one. As sinners, we'd better hope not to be judged by the content of our character. At least, not when God is doing the judging.

But I guess religious tackiness is the theme of the week. I watched the inauguration, and took particular note of the benediction. Now the red man can get ahead, man; etc. Yes, indeed: now that Obama's president, there are finally going to be opportunities for people of color! If only it had happened earlier, why, our nation might have had a holiday devoted the memory of a black leader... Oh, wait. We did. This Monday.

Well, anyway, now that Obama is here, we might one day even have a black president! ...Er... So what was that guy saying about minorities finally having a chance thanks to Obama? Hmmmm....
Posted by RobbieFish at 9:48 PM