I will now sing the praises of Marty's Auto Shop. I pass on only what was passed to me: word-of-mouth praise for a repair shop that does good work at a fair price. A co-worker told me that her family has all their auto repair done by Marty's, at 9700 Gravois in Affton, right next to the viaduct a block west of MacKenzie. So when my car needed a new timing belt put in, I did some price-shopping and Marty's came in with the best quote. Today I picked my car up. It was done on time; it's in fabulous condition; and the price was what they quoted to me. An awesome job! 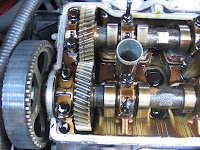 I am so thankful not to have to put up with the MetroBus system any more. I think a few more days of that would have finished me off. MetroBus, I'm sorry to say, is not a good deal. For $2.75 you can get a ride anywhere in the bi-state metro area, plus a multi-use transfer good for about 3 hours, but this deal doesn't seem so hot when you're standing at the corner of Lindell and Grand at 11:05 p.m. waiting for a 10:45 bus in bitterly cold wind.

It took me two and a quarter hours to get home from Grand Center on Tuesday night, thanks to a combination of no-shows, schedule-bendingly late buses, friendly MetroLink light rail personnel having no knowledge of bus schedules, and one uncommonly friendly bus driver who went the extra mile (or 5 or 6) to accommodate the only other passenger, who was in a hurry to go back in the direction I was coming from. 2.25 hours to cover a distance my car can handle in under 20 minutes. That's just sad. And much of it (the waiting-in-the-wind bits especially) was uncomfortable, tedious, and scary.

Tuesday was my big bus day. I made 2 and a half round trips by MetroBus that day, which kept me out of the house for all but about one hour between 9-ish in the morning and a quarter past midnight. Some of the buses did not follow the route advertised on the TripFinder website. Some of the stops were not located where TripFinder said to look for them. And none of the buses after about 5 p.m. were less than 15 minutes late. I waited 25 minutes for one bus before giving it up as a bad job and walking several blocks to try to catch a different bus (whose route I had noted as a fallback), only to find that one running 20 minutes late as well.

Wednesday, while waiting for one particular bus, I discovered a bus-related corollary to Murphy's Law: If you're waiting for a particular bus, two other buses will pass in each direction, possibly more than once, before your bus appears. I bummed rides when I could. I walked my cat to the vet (!) for her vaccination appointment. Any trip I couldn't make on foot, I made by bus - often spending more time at the bus stop than actually riding a bus. I couldn't live that way if my time was actually valuable.

So today, I took my last bus rides (for now) to Marty's to pick up my car. I am so glad it's back. It purrs like a kitten. It runs better than it has since before the first time I had the belts replaced back at 50,000 miles -- which is one of the reasons Marty's one the bidding war against the repair shop I used the last time (they also quoted $50 higher than Marty's did). And so I hand over to you what was handed to me: the praises of Marty's, who have so marvelously delivered me from the long cold hello of public transit.
Posted by RobbieFish at 5:34 PM