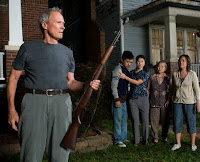 Yesterday, I took advantage of having my car back and went to look at a movie. The matinee of the week was Gran Torino, starring and directed by Clint Eastwood.

At his time of life, Eastwood is perfect for the role of a grumpy, war-hero widower glowering at the ethnic gangs increasingly ruling his Detroit neighborhood. The result is a near-perfect film, replete with suspense, brooding anger, grudging respect, witty banter, politically incorrect humor, and sacrificial love.

The best slice of the celluloid cake has to do with an old, Polish-American curmudgeon teaching a rudderless Hmong youth how to be a man. It starts when the Hmong boy next door tries to steal Walt Kowalski's 1972 Ford, which he helped build when he worked at the plant, as a gang initiation. Thao Vang Lor is basically a good kid. So, with good material to start with, Kowalski makes a surprisingly successful project out of him: teaching him to use tools, talk to grown-ups, pick up a girl, and do paying work. But in spite of Walt's uniquely-flavored TLC, Thao will never be free of the Hmong gang that pursues him - never without blood being spilled.

Where the film hits the skids (just slightly) is in its casting. There aren't very many big, Hollywood films featuring Hmong actors. Because many of the key characters in this film are Hmong, Eastwood had to fall back on an amateur talent search. Heroic as their efforts were, these untried actors never seemed quite up to the job of carrying a big Hollywood film.

Nevertheless I wouldn't be surprised to see Bee Vang, and perhaps also Ahney Her, build a film career - and the skills to go with it - from this start.

This movie may also boost the career of Christopher Carley, who plays the babyfaced priest who makes saving old Walt his personal mission. When Eastwood, to his face, calls him an "overeducated, 27-year-old virgin who likes to hold the hands of superstitious old ladies" and who knows nothing about life and death, it was a moment I recognized after locking horns with some of my first parishioners. Evidently Father Janovich makes a better comeback than I did, because he (sort of) makes a convert... while I'm here, writing movie reviews when I should be out looking for a job. Heigh-ho.
Posted by RobbieFish at 10:11 AM