I watched a gruesome horror movie last night... in my sleep. I'm not sure it was a nightmare; I can't recall feeling like the scary stuff was happening to me, or (worse) that I was the one doing it. It was more like watching a really nasty program on the inner TV.

The topic of the program was unnecessary surgery. We're talking really, truly uncalled-for operations, in which the patients were left disfigured, disabled, and in excruciating pain. I remember seeing horrible, badly-sutured wounds; a guy who'd had both kidneys removed for no reason, and must somehow get by without them; and even an operation transplanting somebody's brain into somebody else's skull. Most dreadful of all, I overheard the surgeon remarking that the new skull wasn't quite big enough, so the recipient was going to lose a goodly amount of brain tissue. 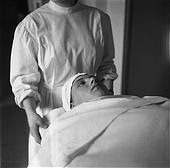 Why did I have such a cruel and disgusting dream? The first person I told about the dream asked, "What have you been reading lately?" There's someone who knows how I tick. Among the last half-dozen books I have read, one depicted a battle in which vampires and werewolves vivisected each other. Another featured a monster who collected eyeballs from other creatures (and people), fitting them into the surplus eye sockets on its horrid face. Still another book subjected its hero to a wasting disease in which maggots were erupting from sores all over his body. There was a bit of torture, a threat of subjecting an unwilling patient to a frontal lobotomy, and some distressingly unnatural body changes - and that only takes me back a couple of weeks.

I've been accumulating some pretty grisly material for my subconscious to mull over. Even re-reading Harry Potter and the Half-Blood Prince - a bit of homework I've started, to get ready for the sixth Harry Potter movie this summer - involves a certain amount of unpleasant imagery. In my last reading session before bed last night, Harry got his nose stomped on and broken. Perhaps some of the blood that flowed over my bad dream was his.

So I guess the next book I read should give me a break from heavy-usage body parts. I'm planning to focus on The Little Grey Men by B. B., a book enthusiastically recommended by Julie Andrews. Since I know that her taste runs toward light-hearted fantasy, I reckon it's just about dream-safe.
Posted by RobbieFish at 2:59 PM