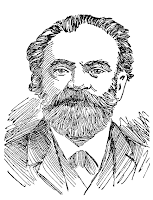 It's shaping up to be a rich season of Symphony-going for me. The St. Louis Symphony is playing a season-long tribute to Russian and Soviet music, which has long been a particular interest of mine. And though I sadly missed Joshua Bell playing the Tchaikovsky Violin Concerto on opening weekend, I'm not going to miss much else this year. Between my season tickets, some additional tickets I have already pre-ordered, and the concerts I'll be in with the Symphony Chorus, I expected to hear at least 15 different programs this year. And that was before tonight's surprise treat of a comp ticket!

It was a good night to be a music-lover in St. Louis. Let me tell you about it, starting from the end of the concert and working back toward the beginning.

The second half of the program was Dvořák's 8th Symphony in G major. This is one of those pieces that, to me, is such a dear, old friend that I was loath to buy a ticket to hear it. Why? Because (I reasoned) I know it so well that I'm not likely to hear anything new. I have been on intimate terms with Dvořák's 8th since I was a teenager. It was part of the first collection of classical CDs that I bought all at one time, together with my first CD player, when I was a junior in high school. It was one of the first symphonies that I listened to from start to finish, over and over. I liked it the first time I heard it. As I studied music in college, I delved deeper into its structure and meaning. I have returned to it many times over the years since then. 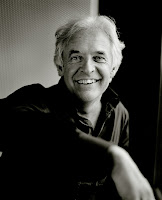 To be honest, though, I was never even remotely tempted to buy a ticket to hear it. So I have a comp ticket to thank for my evening of joy; for between Dvořák's 8th and the oh-so-familiar Grieg Piano Concerto, I didn't see anything on the program that jumped out at me and said, "I've got to hear this concert at any cost." And so I might have missed a truly marvelous performance.

The conductor was Hungarian-born Gilbert Varga. He was really entertaining to watch. He has a unique gesture and a hugely expressive physicality. More importantly, he gave the Dvořák 8th an interpretation in which keen intelligence held hands with fierce emotional energy. He brought to what I have always thought of as a nice, friendly, charmingly episodic work a sense of structural dynamism that made each successive, all-too-familiar passage seem like a fresh discovery, and that knit the whole together into what I now recognized, for the first time, as a truly great symphony. I mean, I always knew it was very, very good. But I had never heard anyone until Gilbert Varga play it as though it was great. 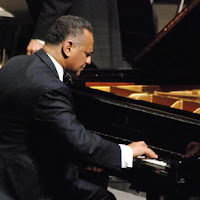 Rewind to before the intermission. The big number in the first half was Grieg's Piano Concerto in A minor, a youthful work written when its then-25-year-old composer was still enamored of Schumann and Liszt, and hadn't yet found his distinctive, Nordic-folk-music-tinged voice. It was also, apparently, written before someone told Grieg that he worked better in miniature pieces than in large-scale forms, because it's a very successful and perennially popular piece. I have grown to regard it as being at the lightweight end of the Romantic concerto repertoire, but again, it's one of the first pieces of its kind that I ever listened to and learned to enjoy. And I had frankly forgotten many of the charms scattered throughout this well-crafted piece.

Joining Varga on the stage was piano virtuoso André Watts. And it was in this part of the concert that I realized how perfectly situated my free seat was. I was in the sixth row of the peanut gallery, just slightly to stage right of the concert master. This gave me an unobstructed close-up view of the piano keyboard and everything Watts did to it. I had the pianist in profile, looking from a slight upward angle. So I could actually read his lips while he lip-synced (or possibly mumbled) nonsense lyrics to all the notes he was playing. I couldn't actually hear him vocalizing, but it was like watching a Mel Tormé scat solo perfectly timed to match the massive chords, sweeping arpeggios, fiddly runs, and grand themes that Grieg demanded of his soloist, one after another. I wondered whether his made-up lyrics helped him remember the notes. 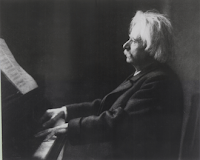 Watching Watts play was very entertaining, and from a pianist's perspective technically fascinating. Watts has a distinctive way of releasing the final note of a riff by flipping his hands palm-up. One lady commented in my hearing, afterward, that it was as if Watts were tossing that final note into the air; it made her want to dive to catch it. That's certainly one point of view. I saw it more as a way of giving certain phrases an incredibly light, graceful finish, as though the line had floated off into space. To my sensibility, this touch is of a piece with Watts's way of massaging the keys of a long-sustained chord, as though trying to squeeze even more sound out of notes that had already been played. I used to do this too, possibly on the advice of one of my childhood piano teachers. It comes from a performer's need to be actively performing even when, for the moment, his part doesn't give him anything to do. I sympathized with Watts, because I too could feel, at two or three points, a lapse in Grieg's attention to the piano part, points when any performer would do anything in his power to be expressive, but when nothing was written except "hold this chord for another two beats."

Watts did a sensational job. Of course, he totally upstaged Varga. From my point of view, the conductor was completely hidden by the lid of the piano, except for his legs and, at two or three points in each movement, a critical cue for the first violins. The applause was thunderous. If it didn't give anybody temporary, partial hearing loss, it isn't my fault. 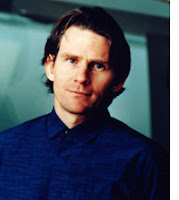 The concert opened with a piece called "Turning the Key," recently composed by Steven Mackey for the opening of the Miami-based New World Symphony's new concert hall. It was interesting to learn, from the program notes as well as orchestral pianist Peter Henderson's pre-concert lecture, that Mackey was converted from garage-band electric guitarist to classical composer following an undergraduate Music 101 class in which he encountered Beethoven's Third Symphony. There's still a trace of rock in this very exciting, fun-to-hear piece. Eleven minutes long, scored for a large orchestra with lots of percussion, it began rather confusingly with two percussionists processing up the aisles of the hall, clapping their hands in a long-long-short-short, 7-pulse pattern.

Their clapping blended seamlessly out of the applause welcoming the conductor on stage, and with the conductor's encouragement the whole audience soon got into it. He even conducted us in a crescendo before bringing in the orchestra. A most novel way to start a piece! But once it got going, it ran like an engine, making increasingly interesting things happen and finally gathering momentum to a big finish. I think this piece could even win over many people who object to new music on principle. 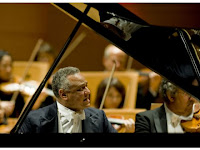 I, for one, sometimes ask myself what's the point of buying tickets to a concert only to hear music you have heard many times before. To some extent, I now find myself hesitating to commit money to a concert unless there's something on the program that I haven't heard before. I think the future of classic music as a living culture depends on concertgoers having an attitude like this. But now I have to grant that this evening boasted a very watchable performance of the Grieg, and a frankly life-changing interpretation of the Dvořák. The latter was certainly a revelation at least to the young couple down the row from me, who had never heard it before. Before the second half began, I told the young lady that she was in for a treat, and had only a slight qualm of conscience when I added that Dvořák's 8th is a "great symphony." Afterward I beamed like a proud parent and asked her, "Did I lie?" She confirmed that I did not.
Posted by RobbieFish at 9:21 PM