This past week has been a performance week for the St. Louis Symphony Chorus, leading up to our first pair of performances this season. On this Friday and Saturday night (the latter broadcast live on the classical band of the local public radio network), under the baton of principal guest conductor Nic McGegan, and enhanced by the flawless performances of five soloists from within the chorus, we joined the orchestra in Franz Schubert's rarely played but heartbreakingly beautiful Mass in E-flat.

This is one of Schubert's last completed works, composed in 1828, the year of his death at age 31. One of six settings of the mass that Schubert wrote, it was never performed in his lifetime - though, luckier than some of his other masterpieces, it did make its debut within a year or two, at the Vienna church where Beethoven was buried, conducted by Franz's brother Ferdinand. (Oh, behave!) It had, after all, been commissioned for that church. Since then it has fallen rather in the shadow of some of Schubert's other masses, including the popular A-flat and the dainty little G major. This is no reflection on its musical quality or greatness. Rather, it is a result of technical challenges, particularly in the fugues.

Like Mozart, Haydn, and Beethoven before him, Schubert took a late-in-life interest in the study of counterpoint, such as the fugues of Bach and Handel. But when he wrote the fugues in this mass (for the concluding sections of the Gloria and Credo, the Osannas and the opening of the Agnus Dei), Schubert did not write slavish imitations of Baroque counterpoint. Rather, he treated the fugal style as a vessel, pouring into it his own unique and forward-looking harmony. Especially in the "Cum Sancto Spiritu" and "Et vitam venturi" fugues, he filled vast structures with the sort of slippery, chromatic harmonies that would not be heard again until the days of Bruckner, some 50 years later. Unfortunately, the acoustics of your typical cathedral tend to turn all this strange and wonderful music into a blurry mess, unless you slow the tempo down to the point where it becomes a tedious and vocally exhausting dirge. This means either the work must be performed with the fugues cut, or not at all. 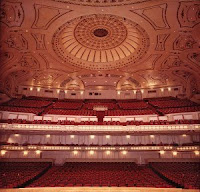 So your best chance of hearing it in all its contrapuntal glory is in a concert hall, such as Powell Symphony Hall this past weekend. And to those who will say that the words "Schubert fugue" are an oxymoron, and that the cutting of those fugues can hardly be much of a loss, I say: Phooey! You have to hear these things! They show a whole side of Schubert you never dreamed existed!

The Vienna-born Schubert scored this mass for an orchestra of 2 oboes, 2 clarinets, 2 bassoons, 2 French horns, 2 trumpets, 3 trombones, timpani, and strings. The trombones (bass, tenor, and alto) double the chorus as per a long-standing Austrian custom which also influenced the scoring of, say, Mozart's Requiem. Besides a mixed chorus dividing into as many as 7 parts, there are 5 soloists (including two tenors), who only sing for three brief spells, while the chorus sings almost continually for the roughly 50-minute duration of the work. Nevertheless, it is one of these solo spells - the "Et incarnatus est" passage of the Credo - that, for many in the audience, instantly repaid the cost of their tickets. 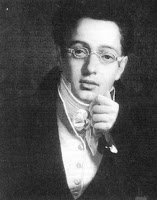 This Mass, as usual, breaks up into five or six chief parts. First is the Kyrie (Lord have mercy, Christ have mercy, Lord have mercy). Then the Gloria (a long hymn of praise beginning with the angels' song of Luke 2:14), the Credo (the Nicene Creed), the Sanctus (Holy, Holy, Holy Lord God of Sabaoth) and Benedictus (Blessed is He who comes in the name of the Lord)--each ending with an identical fugue on the text "Osanna in excelsis"--and finally the Agnus Dei (Lamb of God who takes away the sin of the world). What is unusual is what Schubert does with these words. I do not speak merely of the gorgeous, singing melodies Schubert imports into these liturgical numbers (though he was, before all other things, a great songwriter), nor of the novel harmonies, nor of his handling of orchestral colors (including extensive passages where the wind band is separated from the strings). I mean that Schubert actually deviated from Catholic liturgical custom in his setting of the words, both by bringing back repeats of earlier material in a way that Just Isn't Done and by actually omitting portions of the text.

We will never know exactly why Schubert made these omissions. In some instances it almost has to be deliberate; for example, never in any of his settings of the Mass did Schubert treat the words in the Creed that cover the "one holy, catholic and apostolic church." Obviously Schubert had some issues with the established church. In other cases, however, the omissions may have been accidental. Yet carelessness does not seem an adequate explanation, given the exquisite detail in which Schubert filled his canvas; no more can his unfamiliarity with the liturgy be credited, because no serious musician in Schubert's time and place could have been ignorant of the many settings of those words by other composers. I reckon Schubert chose not to set them simply because his notions of musical form overrode the letter of liturgical law. For him, that is. This has been another stumbling block against getting this work performed, with or without fussy little "completions" inserted by other composers to cover up Schubert's omissions. I am proud to say we sang all the notes Schubert wrote, and no others.

So, if you were listening closely in the Gloria, you may have noticed that the opening "Gloria in excelsis Deo" came back later on as a refrain, and its music was later recycled with the words "Quoniam tu solus sanctus," etc. This is one of those Not Done things, but from the perspective of a symphonist like Schubert it makes perfect sense, turning what is usually a big, shapeless, through-composed number into a tautly constructed Rondo. During the "Gratias agimus tibi" passage, Schubert gives a gorgeous melody to the cellos and clarinets while the chorus serves as accompaniment; perhaps strangely, they also keep repeating "Gratisas agimus tibi" like a refrain after each successive phrase from "Domine Deus" through "Filius unigenitus." Then, during the dramatically intense "Agnus Dei" passage, a knowledgeable listener will expect to hear (in Latin) the three petitions: "Who takes away the sin of the world, have mercy on us; who takes away the sin of the world, receive our prayer; who sits at the right hand of the Father, have mercy on us." Schubert, however, simply repeats the first of these three petitions; so there is no direct reference to Jesus sitting at the right hand of the Father or hearing our prayer.

In the Credo, the omissions are even more bizarre. Besides skipping the article on the church, Schubert mangles the phrases "I confess one baptism for the remission of sins and I expect the resurrection of the dead"--resulting in the incomprehensible confession of "one baptism for the remission of the sins of the dead." Plus, the solo trio comes back for another shot at the lovely "Et incarnatus est" after the chorus introduces its "Crucifixus." It's a possibly unique yet strangely effective recap, seemingly making Christ's conception and birth a single unit with His suffering and death. 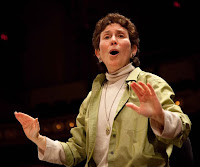 Amy Kaiser, our chorus director, remarked after the performances that the Sanctus reminded her of a scene in outer space with planets rushing by. There is something sci-fi-movieish about it, though this association obviously wasn't intended by Schubert. The far-reaching harmonies (E-flat major to B minor to G minor and back to E-flat) and the extreme dynamic contrasts (fff dim. to pp) seem to depict God has a remote celestial object, and our prayers as ascending toward Him across cosmic distances. When this threefold Sanctus comes back a bit later, it is both foreshortened and fainter, as though the divine UFO has flown even farther away. A solo SATB quartet dialogues with the chorus during both the Benedictus and the "Dona nobis pacem" section of the Agnus Dei, the latter of which is sublimely peaceful and full of confident assurance. This is in contrast to the main part of the Agnus Dei, some of the severest and darkest music in the entire work, which also (contrary to liturgical custom) returns in the midst of the "Dona nobis pacem" to create a final, climactic crisis whose resolution heals the whole work.

I shall arbitrarily choose this point to stop rambling about Schubert's wonderful Mass in E-flat. I could talk all night about why it is wonderful, and why I mean more than one thing by the word "wonderful" in this context. If Schubert unintentionally made a cock out of the liturgical text, it is a flawed masterpiece--with heavy emphasis on "masterpiece." If, as I suspect, Schubert's intentions were not so innocent, it becomes even more thought-provoking and challenging, even for us faithful types whose mouths go dry while singing such words as "in remissionem peccatorum mortuorum." But at the end of the week, I have to hand it to old Franz--or rather young Franz; alas, never old: He knew how to write music of unforgettable beauty and devotional power, from meltingly luscious tunes to sophisticated, large-scale fugues whose notes fall comfortably within the voice while, at the same time, being highly challenging and constantly unexpected. This is music that touches the heart and stimulates the mind. It is, in a word, genius. 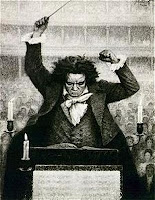 And now, a final quick note that the first half of the concert was Beethoven's Fourth Symphony, a bright and lively classical masterpiece that tends to be overshadowed by the heroic Third and the fateful Fifth. In a daring attempt to approach Beethoven's punishingly fast metronome markings, Maestro McGegan stirred the orchestra up to a froth of virtuosic energy. I saw both performances from the house and was absolutely staggered by their awesomeness. I fell in love all over again with the slow movement, its delicate lyricism and its gentle "ta-da" figures. I marveled at the control McGegan brought to that chaotic Scherzo, which could so easily degenerate into the sound of a bunch of instruments falling down a flight of stairs; a control made even more amazing by the fact that, from behind, it is hard to see what McGegan is doing that could possibly command such unity and precision among the players.

Nic, who is scheduled to receive an O.B.E. from the Queen next weekend, is an atypical conductor that way. His elbows seldom move far from his sides. His hands, adorned even seldomer by a baton, often seem more occupied with shaping the sound than providing a clear taktus. Given his short stature and his tendency to wave his hands around the level of his navel, some of the players might have visibility issues, regardless of the height of the podium on which Nic frequently hops up and down, or at least bounces on the balls of his feet. This habit can sometimes create "visual noise," making the beat even harder to find. And yet, that amazing Scherzo hummed by without a hitch, followed by the even more impossibly fast Finale. How does he do it? Whatever his secret is, he holds it close to his vest (literally), and only the orchestra can tell. As a member of the chorus that faced him this weekend, however, I can confirm that in some way that seems to defy the physics of conducting, Nic achieves the results he seeks. And with Beethoven and Schubert in his hands, he's in good company!
Posted by RobbieFish at 2:15 PM