When my Dad joined Facebook, it was only so that he could connect with some resource or other that wasn't available any other way. After looking around for a while, he asked me (via an off-the-wall message): "What exactly is the point of Facebook?" I had to candidly reply that it's an engine for burning time.

That, however, was before I started playing any of the Facebook games, popularly known as apps. Soon after I started doing this, another longtime friend joined Facebook and my first post to his wall was: "Welcome to Time Wasted Central!" And by then I was only starting to really know how true that is. 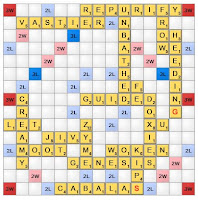 And let me be honest: They kind of suck. I mean, they're designed to waste more of your time than absolutely necessary, and to pressure you into spending money on them. At least I have that last bit under control... well, mostly. Some of the games are just plain lame. And some of them only seem cute until another player comes along and takes a dump on your fun.

One app that I played for a couple of weeks was "Backyard Monsters." For a long time, I seemed to be alone in a little virtual world, at leisure to build up my farm of cute monsters. Now and then some wild monsters would attack, but they were always easily repelled. Then one day while I was at work, another player decided to attack my farm, in which I had invested an inordinate amount of time building it up to such-and-such an extent. They didn't just rob and pillage a little. They destroyed every thing I had built, razed it right down to the ground. I would have had to start over from Zero. You know what? I decided that was enough of Backyard Monsters for me. Forever. It was cute while it lasted, but not cute enough to go again through everything I had gone through up to that point, and certainly not cute enough to put up with a jerk of a player whose idea of fun is to annihilate everybody else who is trying to enjoy the game.

I also played Mafia Wars for a while, but even though I made good progress, I could never quite forget that I was role-playing somebody who killed people for personal gain. Plus, there was so little I could do in any one sitting without running out of energy points, or stamina points, or money, or whatever. When I decided to quit that app, I discovered a useful tip: If you go into "application settings" in your Facebook account, you can block an app from sending you messages or using your personal info. So I don't even have to deal with incoming "gifts" from other Mafia Wars players. It's a mercy!

Lately, the games I play are mainly of the board-game variety. One of my left-coast friends and I have five games going at any given time, divided between three variants of Scrabble (including the official Scrabble ap, plus Lexulous and Wordscraper). I have Scrabble games going, turn and turn about, with four other folks at this time. Now and again I poke my head into Family Feud, or Mah Jongg, or Text Twist. And then of course, there's the one role-play type game I have stuck with since the beginning: Kingdoms of Camelot. 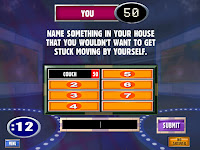 Right now I'm a Level 51 "Grail Night" and I have 3 cities. They're doing fairly well, but probably only because I keep them under a "fog of protection," at considerable expense mind you, because I'm really a hopeless player. I still don't know what the heck I'm doing. Can't get my armies up to a respectable size, and just when I start getting there I make a foolish gamble while trying to conquer a wilderness and end up with an Army of Zero again. Meanwhile, the wilds I do own are getting picked off by more aggressive players.

Seriously though, some of the people I'm playing with seem to have no end of time to blow. I couldn't make a living if I spent as much time as they do perfecting every fiddly little gimmick in all of these apps. I feel like I'm letting down my friends who let me play with them. But I have to remind myself that life is precious. I don't see myself wasting much more of it playing these apps!

Well... except maybe the Scrabbly ones....
Posted by RobbieFish at 9:24 PM