Last night, I ate at the bar of the neighborhood Greek restaurant, which is growing more and more to fill the "comfort food" slot in my lifestyle. Nevertheless, I decided to dip a toe outside my comfort zone by having an after-dinner drink I had never tried before: metaxa.

If you've been to a Greek bar, and maybe other kinds of bar, you have probably noticed a fancy, decorated ceramic bottle with the name "Metaxa" printed on it. Being more used to Spanish lingo than Greek, you probably expected that the "x" was pronounced like a guttural "h" and that, moreover, there might be a worm at the bottom of the bottle. Silly! You're thinking of mezcal, a relative of tequila.

Metaxa, meanwhile, is spelled with an "x" that's pronounced just like an "x," and is just a traditional type of brandy distilled from grapes according to a recipe going back to late 19th-century Greece. (My knowledgeable bartender, however, claims that it's one of the most ancient spirits in Western culture.) It's surprisingly mild. My impression on tasting a generous shot of it was that it "tastes like wine and burns like brandy." Come to find out, upon further research, that it's actually a blend of both. So it doesn't have quite as marked a flavor profile as, say, ouzo with its licorice-like infusion of anise and other herbs; nor is it as sweet and mellow as amaretto; nor is it as stiff a drink as grappa, which is basically moonshine distilled from whatever is left of the grapes after wine-making. It's just a nice, mild spirit that combines some of the appeal of both wine and brandy. 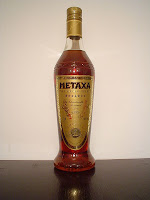 I didn't actually try the stuff in the fancy ceramic bottle. That's the "Special Reserve," or something like that, and by the sound of it I thought it might be too sweet for my taste. Not to mention expensive. I figured, if it's something you need to acquire a taste for, you should try acquiring it from the "regular" variety. Otherwise, how can you appreciate what's so special about the "special" kind?

Wiki says you can have it on the rocks or in a mixed drink, such as a metaxa sour. I had it neat, in a cute little shot-glass-sized brandy snifter. This isn't the stuff that changes color when you add water (again, silly, that's ouzo), so there didn't seem to be any point in watering it down--especially when I found out how mild it is. I recommend it for couples who can't agree whether to take wine or booze after a meal. Since it goes down so easily, it could make for a dangerous series of shots.
Posted by RobbieFish at 7:04 PM