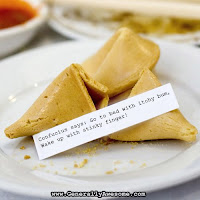 In the good old days, you could count on Fortune Cookies for a good laugh. They were either so far off the mark (like the one that told me I was "very pretty"), or so unintentionally funny if read in a certain context (such as adding "in bed" at the end), that they could not be taken seriously. They tended to be vague enough that, like a horoscope, they should seem to apply to anybody. Yet the ones I remember best are the ones that I pasted on the wall above my toilet: "It is better to have a hen tomorrow than an egg today" (which is doubtful, in the context you're thinking about as you sit on the toilet), and: "What you leave behind is more mellow than wine" (which, in the same context, I can neither confirm nor deny).

For the most part, the sentiments enclosed in fortune cookies tended to be too innocuously generic, too much like the compliments you give on first meeting a complete stranger, to be taken seriously. Even when you must resolutely ignore the miniature altar in the corner, offering a sticky bun and a smoking incense stick to a six-inch statue of Buddha, in order to stifle your qualms about "eating food sacrificed to idols," a fortune cookie seldom if ever promoted magical thinking... until lately. 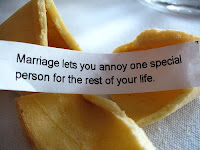 Thursday afternoon, however, I got an unnervingly specific fortune cookie message. At the end of a meal at a fine Asian buffet (the Emperor's Palace in Chesterfield), my server brought me a cookie with this prediction folded inside: "You will receive unexpected support over the next week. Accept it graciously."

Now that's clever! And for a Christian, who lives under God's command not to consult with fortunetellers or to practice divination, it's a diabolical temptation.

First, it's very time specific, so you're going to be tempted to look for a possible fulfillment of this prophecy within one week's time, or at least by the end of the following week. And it also seems to be giving advice on how to respond to the offer. Chances are, most people dining at a restaurant like the Emperor's Palace are going to have career opportunities in mind, perhaps even specific prospects they've been wondering about--a promotion or raise they had applied for, a resume they had sent out, a deal they hoped to close, an interview for a job they had all but given up for lost. Now they're thinking: "Will I get the offer? Will it come so soon? Should I take it if it does?" Or at least, "What if it does happen? Should I start believing in this stuff?"--"this stuff" being whatever paranormal power one imagines to be involved in fortune cookies.

And then suppose something does happen that seemingly confirms the power of the fortune cookie. Could happen; even a broken clock is right twice a day. What then? Will you give more credit to that supposed paranormal power, perhaps a spirit from some Asian mythology? Will you engage more readily in magical thinking? Will you expect to find more (apparent) truth in fortune cookies? Will you perhaps take more of an interest in other forms of divination, such as astrology, Ouija boards, Tarot, I Ching? Could such a seemingly less-vague-than-heretofore fortune cookie become a "gateway drug" to a lost weekend of hocus pocus?

Heck, I don't know. All I know is that I was impressed by the way fortune cookies had suddenly grown teeth. Or at least, seemed to. Because when you really think about it, the message my Thursday cookie gave me is just as vague as any of the old kind. It is open to so many possible meanings that the average person will most likely experience something that he can interpret as a fulfillment of it. Maybe it's telling him what he wants to hear. Maybe it's planting a subconscious suggestion in his mind, leading him to create the opportunity that fulfills the prophecy. Maybe it's simply describing a common, every-day experience, together with no-brainer, common-sense advice on how to respond to it, only in a way that makes it seem eerily significant. 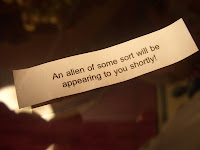 I have to admit, there's a big side of me that delights in the cleverness of this new breed of fortune cookies. They suggest countless ways of messing with people's minds, some of them potentially hilarious. Here are some messages I think fortune cookie manufacturers should try, just for a laugh now and then...

CAREFULLY LOOK BEHIND YOU. SOMEONE YOU KNOW IS SITTING AT FIVE O'CLOCK. DON'T LET THEM KNOW YOU'VE SPOTTED THEM.

A.S.A.P. BUY AS MUCH COCA-COLA STOCK AS YOU CAN AFFORD. SIX MONTHS FROM NEXT TUESDAY, SELL IT ALL!

SOMEONE AT YOUR TABLE HAS JUST TOLD YOU A BAREFACED LIE.

IF YOU DON'T LEAVE IN THE NEXT FIVE MINUTES, YOUR SERVER IS GOING TO SPILL A PITCHER OF ICED TEA ON YOU.

YOU DO REALIZE YOUR PARTNER IS CHEATING ON YOU, DON'T YOU?

IF YOU HAD HOT & SOUR SOUP, YOU'RE ABOUT TO HAVE DIARRHEA. ODDS ARE AGAINST YOU MAKING IT TO THE BATHROOM ON TIME.

THAT COLOR LOOKS AWFUL ON YOU.

ON YOUR WAY HOME THIS EVENING, YOUR SEAT BELT WILL SAVE YOUR LIFE.

DIVORCE IS AN OPTION, BUT MOTHERS-IN-LAW ARE FOREVER.

NOTICE THE COUPLE A FEW TABLES OVER? HE JUST PUT SOME KIND OF POWDER IN HER DRINK.

PLEASE REMAIN CALM. THIS IS THE POLICE. WE HAVE THE RESTAURANT SURROUNDED. CONTINUE YOUR MEAL AS IF EVERYTHING IS NORMAL.

IN SIXTY SECONDS, IF YOU STAND UP AND SING "TAKE ME OUT TO THE BALL GAME" AT THE TOP OF YOUR LUNGS, YOU WILL RECEIVE A LUCRATIVE OFFER.

WHY DO YOU CHOOSE TO LIVE IN SUCH A DUMP? DIDN'T YOUR MOTHER TEACH YOU TO CLEAN UP AFTER YOURSELF?

YOUR HAIRSTYLE IS ABOUT TO COME BACK IN FASHION.

IN THE UPCOMING ELECTION, THE WHOLE COUNTRY WILL BE BETTER OFF IF YOU DON'T VOTE.

THIS PIECE OF PAPER ACTUALLY TASTES BETTER THAN THE COOKIE YOU JUST ATE.

SEE OTHER SIDE FOR VALUABLE INSTRUCTIONS [with the same thing printed on both sides of the slip].

YOU ARE GOING TO BE STUCK WITH THAT DUMB LOOK ON YOUR FACE FOR THE REST OF YOUR LIFE.

PLEASE HELP. THEY'VE LOCKED 40 OF US IN A CELLAR WITH NOTHING TO EAT BUT SALTINES AND SAM'S CHOICE SODA. WE ARE FORCED TO MAKE THESE DAMNED COOKIES 14 HOURS A DAY & THE HEAT IS KILLING US. PLEASE TELL POLICE TO FIND US AT 701 S 8TH ST, BLOOMINGT
Posted by RobbieFish at 9:19 AM

i love these fortunes!!