Album for the Young 6

This collection includes 74 pages of music by a composer I have deeply revered since my college years. I have gone through two copies of his set of 24 Preludes & Fugues for Piano, a work of Soviet art--no, rather: the work of Soviet art, if not all 20th-century art, that approaches J. S. Bach's Well-Tempered Clavier in profundity, variety, and beauty. 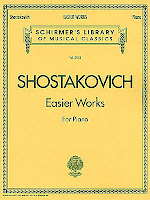 Having discovered works of genius in Prokofiev's "Album for the Young," I expected no less of the composer of those exquisite preludes & fugues. So I snapped up this Schirmer edition, which I was sure would be at least partly aimed at your little Sviatoslav Richter or Tatiana Nikolayeva. And it's true that the first set of seven pieces (pp. 1-10) come from the "Children's Notebook, op. 69," written in 1945 when Shostakovich was a mature composer, albeit one who had been burned by the Communist Party and its suck-up Composers' Union. Plus there are the very early "Three Pieces" (pp. 11-12)--brief, easy, and accessible to players in the easy-to-moderate range of skill.

These are, indeed, easier and more light-weight than Prokofiev's pieces in the same vein, though with some of the same 20th-century quirkiness and ironic humor in them. Op. 69 opens with a two-voiced, C-major "March" that, to start with, threatens to be a monotonous exercise in basic-position fingering and an oom-pah bass line. But in the middle and at the very end, it opens up in unexpected tonal directions. No. 2, a "Waltz" in A minor, invites the two hands to answer each other back and forth in a delicate dialogue. No. 3 "The Bear" opens up more of the range of the keyboard, with ledger-line notes at top and bottom and a good deal of chromaticism within its D-major tonality (2 sharps). No. 4 "Funny Story" pulls back to one sharp (E minor) for a perky romp in disjunct motion, with lots of staccati as it cavorts through key after key with an almost atonal abandon. No. 5 "Sad Story" counterintuitively shifts to the relative (one-sharp) key of G major, exercising Junior's legato line and exploring the deeper, darker regions of the keyboard. It's important to observe the clef changes on both staves, especially at the one brief moment when the hands must cross.

No. 6 "Mechanical Doll" moves to B minor (2 sharps) and requires Junior to string together handfuls of crisp, staccato 16ths, running first upward and later downward as well. The music is jauntily picturesque, with a stompy middle section humorously suggesting a wind-up monster rampaging through a toy city, and then there's a little bit where the hands swap roles and the R.H. furnishes accompaniment to the L.H. I like it, right up to the harshly dissonant "unwinding." No. 7 "Birthday" begins and ends with a pompous, imagine-that-it's-brass fanfare in A major (3 sharps). It exercises Junior in playing some wider intervals, triplets, repeated notes, chords, and even arpeggios (broken chords) requiring finger-crossings. And that's as far as "Children's Notebook" goes.

Then come "Three Pieces," written when Dmitri Dmitriyevich himself was between 13 and 15 years old (1919-1921). The best I can say about them is that they might encourage the little Shostakovich you are nurturing in your bosom to try composing him- or herself. The pieces provide a snapshot of a genius in an early stage of development, still under the influence of models such as Borodin and Rimsky-Korsakov (more on the latter later in this thread) and beginning to stretch in unique directions. No. 1 "Minuet" is all right, though a little more advanced pianistically than the previous pieces in this collection. No. 2, a very slow and almost totally uninspired "Prelude," has the sole merit of being short. No. 3, which reminded me of Borodin most of all, is an unfinished "Intermezzo"--so, unless you are prepared to improvise on it, or at least play a V-I cadence in D major at the end, there's little reason to play it outside of naked curiosity. 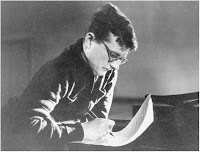 So far the Schirmer collection, up to page 12. After that, the rest of the book is given over to "Easy Pieces for the Piano," edited by Joseph Prostakoff using themes from various film scores, ballet suites, and an operetta. I'm not familiar enough with these sources to tell whether these pieces were originally written for solo piano and orchestrated later, or whether Prostakoff's "editing" involved reducing instrumental pieces to a keyboard arrangement. In the event only two of the pieces, a "Nocturne" and a "Sentimental Waltz," bear no indication of having been part of a theatrical work.

Trying to be tactful here, I can say this about the 25 pieces in this set of "easy" stage and film music: Junior may find them fun to play. They are just challenging enough for a growing, learning pianist that he (or she) might be able to overlook their crushing banality. I played through the whole set a couple months ago in preparation for this post... then quailed in the face of writing it... and now I find that I don't have the stomach for playing them again. It's almost unimaginable that the Shostakovich with whom I have communed for decades, via his Preludes & Fugues, could be the same man who wrote this mind-numbing drivel. In the 1920s, -30s, -40s, perhaps even as late as the -50s, this may have been what one might call a popular style, and as such they had some popular appeal... then. And maybe historical value now. But what about the young pianist today who spends time learning these pieces? What is he preparing to do, other than amuse guests at dinner parties with mildly witty, slightly coarse jokes on Cold War-era pop culture? 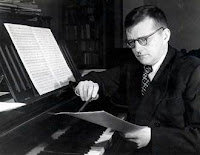 Most of what these pieces have going for them is that they're about as challenging as your typical collection of easy-pianified jingles, pop hits, TV themes, show-tunes, and movie soundtrack outtakes... only without being the same, familiar noise pollution your TV and radio throws at you every day. For banality with novelty, shop here. If you want the best quality of fine-art music Shostakovich can give you, however, you'll have to wait until Junior is ready for the Preludes & Fugues.
Posted by RobbieFish at 10:11 AM