Book 2 of the 100 Cupboards unleashes another storm of breathtaking energy. In Book 1, a Kansas farm became the doorway to one of the most fascinating new fantasy worlds grown on American soil since Oz, a complex and threatening world that seems to exist to test the courage of a lonely, self-doubting misfit named Henry York. In the sequel, Henry and his Kansas cousins, aunt, uncle, best friend, and even the local sheriff get pulled right into this world during the build-up to a battle that may end it all.

They face terrifying enemies, confront mortal danger, and stumble bewildered from one strange encounter to another while they learn the lay of the land and the ways of its magic. And Henry continues his amazing transformation from the boy who was afraid of everything to the one who smiles when his cousin tells him, "Now you're scary." So it's more than just a heady fantasy filled with clever invention. It is a powerful, spiritually moving story about a young man finding his identity, his powers, his family, and his home - just in time to defend them from that which he fears the most.

It begins when Henry learns that his adoptive parents have been rescued from a South American hostage situation. Now they're splitting up and wrangling over who gets custody of him. He doesn't feel much closeness to the Yorks;

he would rather stay in Henry, Kansas, with his Uncle Frank, Aunt Dotty, and three girl cousins, play baseball with Zeke Johnson, explore the 100 cupboards in his bedroom and the magical worlds they lead to, and perhaps find the place and people he originally came from. But Henry's plans take a backseat to the demands of the magic growing within him.

In one moment of awe and glory, Henry is blinded by a shaft of lightning and has the shape of a dandelion burnt into the palm of his hand. This is the beginning of a transformation that could kill him or drive him mad, or that could gift him with a powerful and healing magic. Before Henry's crisis awakens, an evil wizard named Darius snatches him from his Kansas bedroom, planning to enslave the boy and absorb his power. Darius, in turn, serves the witch Nimiane, who has just been freed from her imprisonment, and who could drain all the life out of the land Henry comes from - a land that may be destroyed before he gets to know it.

Stopping Nimiane and Darius will mean fleeing, hunted, from one end of the world to the other; joining forces with faeries whose governing council has sworn to betray Henry and his missing father; risking his own life and the lives of others to reach a besieged city before it falls beneath a storm of evil magic; and finally being named with his own name so that he can stand against the enemy with full command of the power hidden within him. 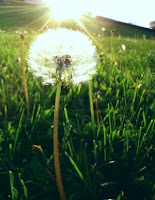 I gasped at the emotional impact of Frank Fat-Faerie's final instructions to Henry, from "You get into the city" to "Write my name on a bit of stone." Knowing that Nate Wilson also writes for something cryptically described as a "trinitarian journal," I was also bowled over by his description of the christening ritual, which includes the words "The true Gods shall be the God before him" - a statement that begs for theological analysis that, alas, I cannot give it in this space. I took great pleasure in seeing the shape of Henry's homeworld come gradually into focus, for him as well as myself, and in recognizing the deep roots of classic story beneath the green and gold profusion of this tale.

It is old and new at the same time. It is a thrilling adventure with a spiritual journey at its heart. It is touched with a gift for vivid and original words, words that richly paint scenes never seen before. And though the ending is as satisfying as anyone could desire, it leaves you wishing for more. So you'll be encouraged to know that the series isn't finished yet. A third book, The Chestnut King, is still to come.

Book 2 of Midnighters picks up about a week after the ending of The Secret Hour. The five young "midnighters" of Bixby, Oklahoma, face a new danger now, a danger that stalks in daylight, rather than the frozen blue hour that opens up at midnight. They share that hour only with the ancient slithers and darklings of the empty plains, who cannot come out during normal time. So whoever is plotting to destroy Jessica Day and her superpowered friends, they have to be human. Humans working for the darklings, communicating with them who-knows-how.

Jessica, Rex, Melissa, Dess, and Jonathan have enough going on between them to stay busy. Romance, jealousy, suspicion, dreadful secrets, and family tensions are constantly pulling them apart. Now someone is manipulating them from outside, someone other than the bad guys. When Dess meets that certain someone, she ends up with a bizarre mental block protecting a fifty-year-old pocket of guilt, fear, and loneliness. Meanwhile, the darklings and their allies have ghastly plans for one of the young midnighters. And just when they need to pull together to save one of their own before it's too late, the conflict simmering between them boils over.

Is this a great fantasy for young readers? Definitely. Will it have long-lasting significance? Yes and no. For along with a spectacularly spooky and original fantasy world, this trilogy traps a moment - this moment, right now - in clear crystal. Today's technology, the social jungle of a small-town American high school, the way teens talk to each other and their families, are all captured in a way that a future generation may be interested in studying... but that, more likely, will start to seem outdated pretty soon. So enjoy it while you can.

The final book of the Midnighters trilogy confronts five teenage heroes with a danger their kind has never faced before. By "their kind," I mean those special people, born at the stroke of midnight, who experience the twenty-fifth hour of every day: the hour hidden within a moment at midnight. While everyone else stands frozen, unaware that time is passing, five high school kids in Bixby, Oklahoma move through a world filled with an eerie blue glow, shared only by the ancient, hungry darklings that dwell beyond the town limits. The darklings are trouble enough one hour a day; but when rips of blue time start opening up during daylight hours, Jessica and her friends must consider the possibility that the World Is Coming to an End.

Rex, the group's seer, can find nothing about this in the lore of past generations of midnighters. But he has other troubles - such as controlling the predatory instincts of the darkling that has become a part of him. Melissa, gifted as a mindcaster, plumbs the mind of the reclusive old shrew who alone survived when the town's last midnighters were wiped out in the 1950s; 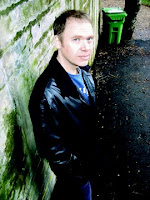 but she has nothing to say about this either. To find out what's happening, the midnighters must turn to the hated Grayfoot family, who collaborated with the darklings in that awful massacre, and who believe the midnighters to be the true monsters.

What they find out is worse than confirming their worst fears. They learn that at midnight on the upcoming Halloween, the blue time will rip wide open and everyone in Bixby - if not the whole world - will be fair game for the darklings. Which is to say, prey. If there is a way to keep mankind from moving down the food chain, it's up to five scared teenagers who, at times, can barely stand each other. It will depend on Dess, the math genius and expert in designing anti-darkling weapons; on Jonathan, the high-flying acrobat; and finally on Jessica, the nightmares' worst nightmare, who will be torn between saving her kid sister and making the ultimate leap-in-the-dark to save the world.

I found this whole trilogy to be a swift, compelling read. I am greatly impressed by this author's inventiveness in crafting such a strange, threatening world, and by his skill in making it believable and even somehow inviting. It is a world that combines a sense of ancient power with an easy familiarity with the way young people talk, and the things they talk about, right at this moment. I would like to hope such a cleverly made book might stretch this moment out forever, but I suspect that the time to appreciate it is right now. So what are you waiting for?
Posted by RobbieFish at 9:09 AM