In St. Louis' south city there is a cramped triangle of streets where Watson Road (heading northeast) merges into northbound Hampton Avenue, while just short of that junction Southwest Ave. (counterintuitively running southeast) plunges right through both of them. On the next block, Southwest comes within a thin sliver of a block of Arsenal Street, but jinks eastward and runs parallel to Arsenal for the length of two blocks before curving northeastward. Right in the middle of that Arsenal-Southwest bottleneck, at the corner of Dalton and Southwest in the famed Hill district of the city, is a bar and Italian restaurant called Mr. B's. 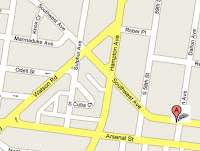 It has been there long enough for the original signage to fall into disrepair. A new sign has been erected next to it. For the past three years, I have lived five blocks from Mr. B's as the crow flies. It is also five blocks, straight down Southwest, from the school where I have voted in every election since 2006. Evidently I don't often visit the stretch of Southwest east of Hampton Ave., because I had no idea where Mr. B's was.

I found it by reading the address (5800 Southwest Ave.) off a Restaurant-Dot-Com coupon I had purchased, and following the descending street numbers all the way from Manchester Road (where I turned onto Southwest on my way home from work). If you ever want an interesting driving experience, try following Southwest Ave. It jukes and jumps in all directions, shares a really weird interchange with I-44, and disappears for two whole blocks during which you have to turn twice (including a 5-way intersection) to get back on it. But at least the numbers descend in an orderly manner from the 7200s near Manchester (where the street begins) and the 4900s at Kingshighway - where it suddenly turns into the 2300 block of Vandeventer Avenue.

So the people who planned the streets of this town were sick in the head. There is evidence of spiritual wellness, at least, inside the doors of Mr. B's Bar & Grill. Once you negotiate the steep driveway to the parking lot, you're going to be OK. They have a nice selection of beer in the bottle, including Peroni: a decent Italian lager I have enjoyed before. I had two of them last night. Beware, however, of dark ale that also comes under the Peroni label; I stumbled on that a few years ago at a restaurant that only carried it when their lager order got screwed up. The darker Peroni is has a sickeningly sweet flavor. 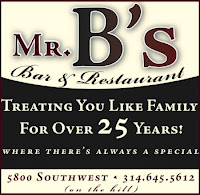 Beginners included a basket of bread, stuffed with both toasted and fresh slices of baguette. On the table was a choice of bread dressings, including both olive oil and margarine, plus grated parmesan, salt, pepper, and I forget what else. The waiter even hinted that he could produce real butter if I wanted it; margarine was OK with me.

I also ordered an appetizer I hadn't tried before: toasted artichoke hearts. What came out of the kitchen was a generous serving of two-bite-sized piece of artichoke, breaded and deep-fried, with a lemon wedge and two dipping sauces on the size. Sauce #1 was forced butter with garlic; Sauce #2 was a warm, chunky marinara sauce. Both went well with the artichoke, though I thought a squeeze of lemon made the most improvement.

While I munched on these starters, I had plenty of time to look around at my surroundings. It's a fairly small joint, dimly lit in the evening. The side facing the parking lot has a stained glass window with the letter B on it in Gothic script. The walls are painted in swirls of paint in an orangey-tan color and hung with old photos that look like somebody's Italian great-grandparents (I should know; I saw pictures quite like them at my Grandpa's funeral last August). There were also decorative ceramic wall-hangings depicting merry gentlemen with captions such as "GOOD FOOD FINE WINE." In short, it looked like it had been decorated with family heirlooms and relics of an old family restaurant, rather than the Pier One shopping-spree look many of their competitors have. 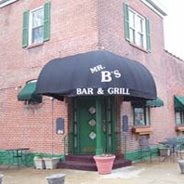 The entree came with a salad. I went with the house dressing, since it was my first time at Mr. B's and I had nothing against it. It turned out to be a creamy, sweetish ranch dressing with a healthy tang of garlic. It wasn't bad at all, but it won't be to everyone's taste. Under the dressing was the usual iceberg lettuce, rings of raw red onion, and generous handful of shredded cheese that so many Italian-American eateries have in common. It's as if we wops (in my case, hemi-demi-wop) must be bribed to eat our salad, bribed with an excess of fat, salt, and sugar. I suspect the cheese was Provel, a locally popular substitute for mozzarella that I don't hold with, but I didn't mind it so much with the salad and dressing.

For my main course, I couldn't decide between manicotti and cannelloni. The difference, for those of you tuning in late, is that the former is stuffed with cheese and the latter with sausage. Other than that, they are the same big, hollow pasta cylinder, stuffed and baked in sauce. I've had many restaurants' versions of each, and I've made my own as well, so I have opinions on what makes them work. So as I mulled over which dish to order, I started stretching my food-critic muscles. The waiter helped me by pointing out that I could order one of each, a dish called Roman Twins. So that's what I did!

The element of surprise was, understandably, the last ingredient I expected. The two pieces of stuffed pasta were presented in a V shape, one of them (the manicotti) covered in marinara sauce, the other (cannelloni) in alfredo sauce. I was amazed to see the latter on my plate. Looking back on other Italian dining experiences, I think I can remember having the option of white or red sauce offered to me, but I never thought of substituting alfredo for marinara on a dish like this. 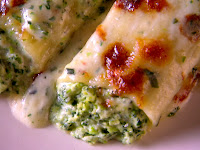 I asked the waiter about this. He confirmed that both the cannelloni and the manicotti are served with both sauces. I think it's rather daring of the chef to force his customers to try these pastas both ways, and to think about them in a new way. While I would still choose marinara over alfredo when asked to decide, I did enjoy the cannelloni alfredo in its own way.

I still had time to blow, and my discounted gift certificate was burning a hole in my pocket, so I asked about dessert. The waiter gave me two choices, both of which made my mouth water. The first, which I requested on his recommendation, was the chocolate-mint cake. But it seems the cake had sold out earlier, so I was forced to change my final answer. Instead, I had an amaretto cheesecake topped with slivered almonds, with a caramel drizzle on the plate. Wow!

I went into Mr. B's Bar & Grill blind. My eyes have been opened. I will be back, coupon or no. I plan to try their steak sandwich next, since it was highly recommended by a customer at a nearby table. Maybe I'll luck out and catch a slice of that chocolate-mint cake. My only regret is having to walk through the bar side of the joint (complete with a cloud of smoke that clung to my clothes the rest of the evening) to get to the non-smoking dining room. I believe there is a door in that room that leads out into the street. It was locked from the outside last night. Maybe next time I'll call and ask if I can be let in that door.
Posted by RobbieFish at 9:06 AM

Thanks Robbie, I was looking for a honest review of this place. We are going there tonight. I'll try and let you know what we thought. Karla