All right, pulling no punches now...

QUESTION: Why doesn't our country get out of the war, stop picking on third-world countries, and mind its own business?

ANSWER: Don't be a dumbass. We're fighting against evil. Evil that has killed thousands of innocent people and intends to kill more. It isn't going to stop being evil if we pull out. Its servants aren't going to stop trying to kill us and destroy our way of life if we back off and appease them. Neville Chamberlain tried that, right? And how did that work out? To do the same with today's forces of oppression and terror would only give them more room to do their evil worst. And if our society can no longer make sacrifices to fight against it, evil is close to beating us already.

ANSWER: Don't be a dumbass. We don't fight the drug war simply because people are killing, stealing, kidnapping, and pimping for the drugs. We fight it because these drugs cause unbelievable damage to people's minds, bodies, families, and careers. The drugs would still do all this damage even if they were legalized. The toll on society from drug use alone is plenty of reason to keep fighting them with the full power of the law, regardless of the forces fighting back. Just because evil people target those who try to fight them doesn't mean that if we stop fighting them, they won't be evil. And you know they are evil, whether they are involved in murder, prostitution, extortion, or none of the above, because the drugs they sell hurt people. And those who profit from those other crimes will continue to do so even without illegal drugs in their portfolio.

QUESTION: But don't you think that, once legalized, the drugs could be regulated so that they are not used harmfully?

ANSWER: Don't be a dumbass. If the harmful drugs are getting to people when they're illegal, they will find a way around your regulations and, even as legal drugs, will still be used illegally and harmfully. The only difference will be a higher class of criminals who, while publicly distributing drugs according to government regulations, are privately running a tax-free, unregulated drug trade under the counter. The mental, physical, social, and economic damage will still go on, only with the connivance and complicity of your own government.

QUESTION: What's the big deal about illegal immigration? Shouldn't people who come to our country in search of a better life have a chance to become citizens? Isn't it just hateful to insist on enforcing the immigration laws?

ANSWER: Don't be a dumbass. The reason the immigration laws were passed was to protect the citizens of this country. To say the laws shouldn't be enforced is to say that our country shouldn't protect its citizens. Plus, the reality is, illegal immigrants aren't motivated by a desire to become U.S. citizens. They come either to benefit themselves or their families back at home, or (in many cases) to be exploited by the people who send them across the border. And by benefiting themselves, I don't mean pursuing the American dream (see next Q&A). They benefit themselves, their families, or their exploiters by working in the sex trade, or by serving the illegal drug trade, or by cutting the throats (job-market-wise) of documented aliens and U.S. citizens by taking less money under the table to do the most menial jobs. Some of them are stealing government benefits from the legal residents who really deserve them. And more and more often, they bring gang violence across the border where innocent Americans can get caught in the crossfire. You don't think this should be stopped? 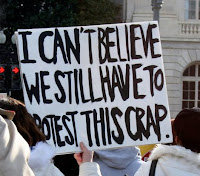 QUESTION: What would be so bad about higher prices and higher taxes? Don't Americans have too much as it is, compared to the rest of the world? Couldn't we learn to make do with less and give more to the government?

ANSWER: Don't be a dumbass. The reason this country has been so prosperous is that the American dream actually worked. By "American dream" I mean the idea that, through hard work, a little luck, and freedom from the power of an overreaching government, any individual can become more than he was. The "American dream" has brought about the most change for the better in the least number of years of any experiment in history. And it's not as though Americans' willingness to give hasn't already benefited every country in the world beyond its wildest dreams. Envy us as they will, we owe them nothing--except China, of course...

QUESTION: You can't legislate love, can you? So what can you possibly have against gay marriage?

ANSWER: Don't be a dumbass. Marriage is a religious institution, commanded by God. The people who really care about it, as a matter of the deepest conscience, believe what the Bible says about it: "Male and female He created them" (Genesis 1:27); "Therefore a man shall leave his father and mother and be joined to his wife, and they shall become one flesh" (Genesis 2:24); "Therefore what God has joined together, let not man separate" (Matthew 19:6). Marriage is a 'mystery' signifying the union between Christ and His bride, the Church (Ephesians 5:22-33); the nucleus of society and wellspring of proper conduct (Colossians 3:18-21); and when properly ordered, gives both husband and wife the best opportunity to build each other up in the fear of God (1 Peter 3:1-7). The "gay marriage" issue isn't about pensions, benefits, and inheritances; all that can be handled without redefining marriage. The real issue is whether our government has a right to abolish an article of the faith and require an entire society, including believing Christians and Jews, to alter their beliefs about marriage.

QUESTION: But isn't all that stuff about wives submitting to their husbands sexist and medieval?

ANSWER: Consider it good practice for when the religious fundamentalists and political fascists whose evil you want to appease and accommodate destroy our country and institute Sharia law. If you think Biblical marriage is medieval, just wait! Meanwhile, if your idea of enlightenment is to allow the Faculty of Gender Studies to open up a satellite campus on every U.S. military base, so that interminable homilies on identity politics can replace the clipped, tight-lipped sound of soldiers and sailors doing their duty, your wait won't be very long.

QUESTION: Wait a minute! Why shouldn't the U.S. military admit openly gay servicepeople? Wouldn't it be great if Congress had the guts to repeal the injustice of "Don't Ask, Don't Tell"?

ANSWER: Don't be a dumbass. All one soldier needs to know about the next is whether he can count on his buddy to have his back (and I mean that in a good way). Knowing much more could put the harmony, cohesion, and discipline of a military unit to a perilous test. Expecting this to happen without violence, loss of morale, and a paralyzing proliferation of claims of harassment and discrimination, is to demand that people hold to "the better angels of their nature" in the highest-pressure situations Americans may ever deal with. The chances of that expectation being fulfilled are about equal to the chances that any productive end will ever be served by graduates in Gender Studies since, after all, the only thing they learn is how to be an even bigger narcissistic bore than they were before.

QUESTION: But surely, you can see that these laws dictating how people can and can't love are unjust and violate our citizens' liberty and basic constitutional rights?

ANSWER: Don't be a dumbass. Laws against that sort of thing have been on the books in every society, including ours, since the beginning of time. If these were basic human rights, don't you think someone would have noticed before? Either there has never been a truly just, decent, or free society until now, or you're dreaming anachronistic dreams when you try to read the come-lately pro-gay ideology back into the Founding Fathers, etc. My fear is that the more our judiciary conjures up novel "freedoms" and "rights," the less our citizens will enjoy the really basic freedoms and rights that generations of loyal Americans have bequeathed on us: freedom of speech, of the press, of religion, etc.

QUESTION: Why don't people stop bitching about the airport scanners and pat-downs? In these dangerous times, isn't safety and security an acceptable trade-off for a momentary, voluntary (though compulsory) surrender of a little individual freedom?

ANSWER: I don't know why I bother talking to such a dumbass. The Fourth Amendment is supposed to protect us from unreasonable search and seizure. But we're supposed to let airport security frisk us, or at least digitally strip-search us (and revealing photos of passengers have already found their way to the internet), without giving any probable cause to be suspected of anything. Real criminals get off the hook every day because the searches that discovered evidence of their crimes were "fruit of the poisoned tree," but law-abiding grandmas have to get x-rayed or felt up if they want to see Boca Raton by Christmas.

QUESTION: Aren't you missing the point here? Everybody equally has to submit to searches and scans, otherwise the security staff will have to resort to racial profiling; and that would be unjust, wouldn't it? 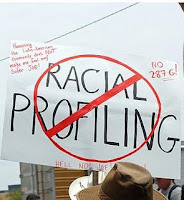 ANSWER: All the shrillness about racial profiling is supposed to protect us from being suspected of a crime (including possible terrorism) on the basis of skin color or apparent ethnicity. But don't you think somebody should at least have to act suspicious before they are treated as a suspect? Meanwhile, our government seems to think it must take away the rights of all in order to protect the rights of a few. And why are we so keen on insisting that terrorism suspects be tried in civilian courts? Do their Fourth Amendment rights matter more than ours? And given the much greater likelihood that, tried under civilian rules of evidence, they will get off scot-free only to try to kill us again (which has also actually happened), how does this make us any safer?

QUESTION: You're not a very nice person, are you? This is why I don't like talking to conservatives. They get so angry about anything that smacks of progress. Admit it!

ANSWER: Phooey! I have a question for you now. Why does everyone always call those on the political left "liberals," when the only thing they are liberal about is spending other people's money?

There's a conversation-killer if there ever was one.
Posted by RobbieFish at 4:11 PM