I love movies, and I love food. Sometimes, not often, both of these loves can be combined into one experience. But short of licking the screen, there is often no way to gratify your jones for the tasty-looking dishes shown in the film. Here are a few that I still salivate over, just thinking about them, but have not yet tasted in life. 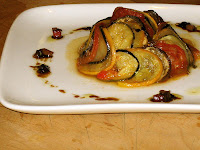 Confit byaldi, the dish that served as a basis for the titular food in the animated movie Ratatouille. Traditional ratatouille, which I would also like to try, is actually just pieces of sautéed zucchini and eggplant, combined (and sometimes baked) in a chunky sauce of tomatoes, peppers, onions, garlic, and herbs. The version used in the film, developed by French chefs in the 1970s and selected for the film because of its beautiful, spiraled presentation, has alternating slices of roma tomatoes, squash, eggplant, and zucchini fanned out on top of the same sauce, reserved overnight in the fridge, and finally baked; when served, the slices are draped around mounds of the chunky sauce, or pipérade, on a vinaigrette-drizzled plate. Every step of that sounds interesting and drool-jerkingly delicious; but, frankly, you had me at "eggplant." I'll go for just about anything with eggplant in it. 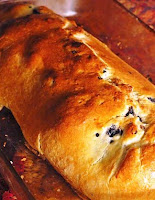 Pate de canard en croute, the final and climactic dish in the blog-based-book-based movie Julie and Julia. That French lingo means "boned stuffed duck in a pastry crust." I looked up a recipe online which is too complicated to reproduce here, but it had the words "cognac," "port," "truffles," and "veal stuffing" in it. Who wouldn't want that? Especially when it looks the way it looked in the movie! Parts of the recipe read as a cooking adventure that might even be fun to have, just for its own sake: carefully removing the bird's skin in one piece; separating the meat from the bones; stuffing and trussing the skin; arranging the pastry around the duck; baking, then chilling the dish; opening the pastry to remove the strings used to truss the duck; and even specific instructions on how to carve!

Cailles en Sarcophage, otherwise known as "quails in a pastry shell," the main dish in the sensuously spectacular meal featured in the classic film Babette's Feast. I found a recipe for this online, as well. It drops some appetizing names too: "demi-glace," "foie gras," "black truffle," "black figs," and "white wine." All this besides chicken stock, puff pastry, unsalted butter, salt and white pepper, and boned quails. There isn't much eating on those little birds, so obviously a lot of what gets taken out of them in bones has to be put back in via chopped-up truffles, figs, and goose liver. The cute little fried critters are served with their heads on and everything, sitting up in a life-like (albeit crispy) manner in a pastry nest and bathed in a savory sauce. Mmmm! Wouldn't I like to have been a dog under the table when Babette served her feast!
Posted by RobbieFish at 7:32 AM