I'm embarrassed to say how many movies I have seen, either on the big screen or on video, in how few of the past few days. I really shouldn't be, though. It's kind of a good thing.

I've been hooked on movies since I was a kid. When I was in college, my buddies and I went to the cinemas at least once a week, often exploiting the discount prices on long-in-the-tooth, "about to come out on video" movies. I kept up this habit when I was at the seminary, usually going with friends but sometimes (with a touch of guilt) taking myself out for a "decompression date" after a Friday or Saturday night shift at my off-campus job. It wasn't until I went on vicarage that I experienced what it was like to really live alone. If I wanted to dine out, I usually had to go by myself. If I had to go shopping, I went alone. For a while, it was a little painful. I found myself with so much time to fill when I had no one to talk to or share it with. But I adjusted. At the end of that year, the pain of living alone had subsided to numbness. And I learned to enjoy escapes like movies for what they were.

And then movies started to suck.

After years and years of nary a week going by when I didn't see at least one big-screen movie, I started walking away from the box office without buying a ticket. At first it was just a week here, two weeks there... but now the weeks when I do go to the movies are the exception, rather than the rule. I go online to check the titles playing on local screens, and more often than not my response is roughly, "Meh." Either I have changed a lot in a handful of years, or Hollywood has given up on providing worthwhile entertainment.

First, on a day when I had nothing better to do because the roads were in bad shape and I didn't dare drive outside my immediate neighborhood, I went to the immediate-neighborhood moviehouse and saw two kiddie movies: Disney's Tangled (officially the studio's 50th animated feature) and The Voyage of the Dawn Treader, the third installment in the ongoing Chronicles of Narnia film cycle. Both movies were totally excellent. Makers of films for maturer audiences should study them for ways to make their entrées more palatable to the paying public.

Tangled is a beautifully textured, emotionally rich, fun-filled, romantic adaptation of the fairy tale of Rapunzel (as in "let down your hair"). Featuring the voice talents of Mandy Moore (as Rapunzel) and Donna Murphy (as the evil witch who pretends to be Rapunzel's loving mother), music by Alan Mencken, a cuddly chameleon and a hilarious horse, it also has a story that, and I say this without any exaggeration, made me laugh and cry. And although many parents may rightly quibble at the film's themes of children disobeying their parents and of girls sneaking off with handsome ne'er-do-wells because they just have to find their own way, it also depicts a noble sacrifice, a low character raised up by love, the anguish of loving parents when their child is abducted, and the same family's happy reunion. So, taking the good and the bad, I think the balance tilts toward good. Plus, the songs are terrific. Donna Murphy stops the show with her song "Mother knows best." When a tavernful of ruffians sang a song about having a dream, I almost cracked a rib laughing. Even the love duet, set to imagery of a swarm of paper lanterns floating over a lake at dusk, had me choked up. Other cast members to listen for include Ron Perlman, Richard Kiel, Jeffrey Tambor, Brad Garrett, and Zachary Levi of TV's "Chuck" (which, by the way, I have never seen).

Voyage of the Dawn Treader is the one where the younger two Pevensie children, Edmund and Lucy, make their last visit to Narnia (apart from, you know, the very end). It also introduces their (at first) obnoxious cousin, a passive-aggressive, unimaginative twerp named Eustace Scrubb. If you've read the Narnia books (and I have, several times), you already know that Eustace comes in for a hard time, learns his lesson, and is thus poised to play a more heroic role in the next Narnia adventure--The Silver Chair, if memory serves. Unless you're a follower of this film series, you probably won't recognize the names of most of the principal cast, except Liam Neeson (voice of Aslan, the lion who serves as a Christ-figure), Tilda Swinton (reprising her role as the White Queen from The Lion, the Witch, and the Wardrobe), and Simon Pegg (voice of Reepicheep, the anthropomorphic rodent who makes an emotionally moving exit at the end of this film).

Last night, my end-of-week debauch included a trip to see the more grown-up movie How Do You Know. This is a romantic comedy starring Paul Rudd and Reese Witherspoon as the hero couple who, unfortunately, never really convincingly fall in love. Which is to say, she never quite seems to fall in love with him, though his smittenness is evident from early on and, at the end, she seems willing to go with that for the time being. Reese plays a female jock whose world crumbles when she gets cut from the national women's softball team. On the same day, Rudd finds out that he is the target of a Federal investigation into some type of shady business practices, though in fact he is innocent; he also gets dumped by his girlfriend.

That evening, the two get together on a blind date and, rather than depress each other with their personal sob stories, mutually agree not to say a word to each other throughout dinner.

Somehow, this disastrous date forms a connection between them that endures Reese's relationship with a repulsive baseball player (played by Owen Wilson) and Rudd's difficulty communicating with his domineering crook of a father (Jack Nicholson, playing a character who, just as he is about to go into one of his patented "You can't handle the truth!" screaming jags, is suddenly brought up short by the realization that his son can't hear him when he shouts. "It's hard not to yell," he confides). It would be a really sweet love story if (1) there was the least bit of chemistry between Rudd and Witherspoon, and (2) Wilson and Nicholson didn't play such show-stealing cads. At the end of the movie I was actually rooting for Paul Rudd going to prison for his Dad (which doesn't happen).

Since then, I have sat through two films on DVD, which I found marked down really low at Target. First there was District 9, the Oscar-nominated, quasi-documentary sci-fi action film set in South Africa, and starring Sharlto Copley (lately "Howling Mad" in the A-Team movie). Copley plays a nebbishy Afrikaner who, owing to his marriage to the boss's daughter, wins the choice assignment to lead Multi-National United's task force to evict 2.8 million "prawns" from their shantytown in the Johannesburg suburbs. The prawns, FYI, are tentacly, very roughly humanoid crustacean types who descended from a gigantic spaceship that, some 20 years previously, stalled over the city. 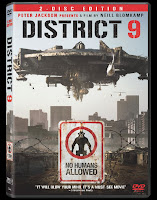 The aliens' treatment by humans, from the brutally pragmatic MNU to the savage Nigerian gangsters who live among them, showcases the worst humanity has to offer. It would be easy enough to read into this movie an allegory about apartheid and South African racism, or about the concentration camps, forced deportations, and genocides that have been so much a part of recent world history, or about the immigration issues that disrupt the political scene, not just in the U.S. but in many other countries as well. Yet it would be a fascinating film simply from the perspective that it is an ultra-violent sci-fi shocker pitting alien invaders against earth-bound humans, but in which the humans are undeniably the aggressors. Of course, maybe now that everyone on earth (except me) has seen Avatar, that doesn't seem so novel.

Copley's character, the unforgettable Wikus van der Merwe, remains as unsympathetic as a character can be until almost the last instant, yet (a tribute to Copley's acting ability) somehow holds your sympathy. At first you accept his eerily cold-blooded behavior toward the aliens as a result of the pressure he is under from his boss/father-in-law, and the tough soldier-types he is surrounded by. Then, after he gets infected by a mysterious alien "liquid," his wildly destructive actions, heedless of the lives and wellbeing of others, seem excusable as self-defense, or at worst the rampage of a scared and wounded man-child who has everybody, and I mean everybody, gunning after him from all directions and for all reasons. It's only at the end, when he tells the prawn improbably named Christopher Johnson, "You're on your own; I'm out of here," that you realize that Wikus is an irredeemable shmuck, and then it occurs to you that all this could end very badly. That it doesn't is a sign that even a bottomed-out loser like Wikus can be redeemed. For a gore-splattered actioner, it's a very thought-provoking film.

Lastly, I saw Fantastic Mr. Fox, Wes Anderson's stop-motion animated film based on the children's book by Roald Dahl. This one features vocal contributions by George Clooney, Meryl Streep, Michael Gambon, Jason Schwartzman, Bill Murray, Willem Dafoe, and Owen Wilson (again). I should have known better than to watch it when I saw the cover of the DVD, which looks like a toy-animal version of the poster for The Royal Tenenbaums. Which is essentially what the movie is--Bill Murray and Owen Wilson included.

What Dahl wrote as a simple English country fable, Anderson directed as an American urban soap opera. The characters aren't just anthropomorphized; they are neurotic. At times, the flow of the story so breaks down that parts of the movie are incomprehensible, or at best, deliberately non-rational. By the time George Clooney says the words "just another dead rat in a garbage pail behind a Chinese restaurant," I could no longer trust my eyes and ears, so weird had the experience become. I prayed for the movie to end. That's never something I want to have to say in a movie review.

So, on a scale from A to F where A is exceptional, B is good, C is fair, D is crap, and F is unprintable, I would grade my five recent movie experiences as follows:
I guess I can't complain. Three out of five were awesome movies!
Posted by RobbieFish at 4:39 PM