Tonight I went to the Symphony and heard Rafael Frühbeck de Burgos do his first St. Louis gig since 1985. The Spanish-born, ethnically German maestro conducted a mixed program of his two specialties: Spanish nationalist music of the early 20th century and a big, serious, German-Austrian symphony.

On the first half of the bill were Frühbeck's own arrangements of five movements from Isaac Albéniz's set of eight piano pieces titled Suite española, op. 47. The orchestration seemed very idiomatic and sparkled with bright colors, with special emphasis on harp, celesta, and percussion. I particularly noticed a tendency for major cadences to be punctuated by a simultaneous striking of a kettle-drum and a tubular bell. To my non-Hispanic ears, all of the movements sounded pretty much Spanish to me, a display of dance rhythms from fast to slow and back again, and one movement was very familiar--perhaps from being used in the soundtrack of a car advertisement or something like that.

Next, there was the second suite from Manuel de Falla's ballet The Three-Cornered Hat, a set of three attractive numbers that I had heard, albeit in a more complete performance of the work, the last time the piece was played at Powell Hall. I was a little less taken by the performance of this suite than the previous set. At the outset, the violins seemed surprised by the conductor's brisk tempo, and in the finale the strings (particularly the lower strings) sounded underpowered in relation to the overall tonal balance. But perhaps I am not the person to make observations of this kind, since I am taking antibiotics to kill a sinus infection that has affected my hearing.

After the intermission, the maestro returned to conduct an overall fine performance of Brahms's First Symphony--a strong flavor that I have come to enjoy. My only complaints about this performance are that the principal oboist fumbled a crucial solo in the slow movement, and that somebody seated behind me and to my left chose to have a loud coughing fit right through the pizzicato passage in the slow intro to the last movement, a passage I was intent on hearing because road noise always drowns it out when I listen to it in my car. 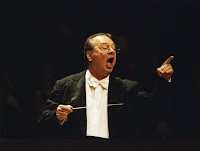 All right, it wasn't an inspired program. Perhaps this accounts for the very poor box office for tonight's performance; though, perhaps tomorrow night (oboe solo and all) will be better. One of the things that excites me about this whole season is the SLSO's emphasis on Russian and Soviet music, which I love; but there was nothing Russian on tonight's program. The Spanish pieces were attractive and fun, like a light sweet sparkling wine, but I don't imagine anyone came expressly to hear them. The Brahms had weight (it was, in fact, the reason I chose tonight's concert), but it's perhaps well-known to a fault. These are the thoughts I had during the intermission, anyway, as I pondered why there was such a huge crowd for last week's performance of Prokofiev's Fifth and such a thin showing for Brahms's First. Surely Prokofiev isn't more popular then Brahms! But, apart from the Leonard Slatkin homecoming spectacle, it had an appeal tonight's program lacked: the combined gravity and novelty of a less-overplayed masterpiece, a listening opportunity so exciting as to be unmissable.