Amanuensis. Say it aloud. Repeat it half a dozen times, slowly. Feel it roll off your tongue and lips. Isn't it a neat word? Whatever it means, Justus Jonas (1493-1555) was that to Martin Luther for a time. That and much more. Jonas was one of the organizers of the Lutheran Reformation, planning disputations and translating Latin treatises into German (or vice versa, as the occasion arose), and writing and preaching extensively. Some of Luther's writings were actually transcripts of oral presentations (lectures, sermons, "table talk," etc.) published on the basis of notes taken by Jonas and others. 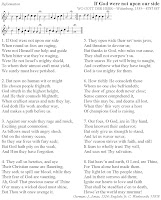 A significant portion of Luther's well-preserved correspondence was written to Jonas. During my seminary years I once lived next door to a dormitory named after him. Known as a prolific hymn-writer, however, Jonas was not. I can't think of a single hymn by him that I have come across in my research... except this metrical paraphrase of Psalm 124, set to its own tune. And that hymn I have only found in one English-language hymnal so far--the same book from the wee years of the 20th century that also featured Luther's paraphrase of Psalm 14. So there's a good chance you're experiencing it now for the first time.

Interestingly enough, Luther himself also penned a metrical paraphrase of Psalm 124, likewise set to its own tune. Both hymns are in the same meter and so, technically, the tunes could be swapped. The first line of each hymn in German is similar enough that they could be easily confused. This hymn appears in the same ancient American hymnal as Jonas's, as well as two subsequent books: The Lutheran Hymnal (1941) and Evangelical Lutheran Hymnary (1996). I deem these two hymnals to represent the strongest efforts to place historic Lutheran hymnody in an American setting.

I don't just say this because of this hymn, or even because I have belonged to churches that used both of these hymnals. I have also belonged to churches that used at least three other "Lutheran" hymnals, and several "hymnal supplements" besides. I think each of these other books moved the church a little closer to the spirituality revealed by our survey of the Ambassador Hymnal. I don't think these facts are unconnected. Including this type of "Reformation hymn," especially one written by Luther himself, is among the factors that make TLH and ELHy more "altlutherisch" in my estimation.

Any road, Luther's paraphrase of Psalm 124 has enjoyed a bit more currency in American Lutheranism than Jonas's version. This does not necessarily mean anyone has been singing it. Very likely it is one of those hymns that is seldom picked for singing in worship, even if it's in the church's hymnal. I know it well, but I'm kind of a chorale nerd; I've been playing, singing, and meditating on hymns like this since I was a kid. But I also have enough experience as a pastor and church musician to know that asking the average layman to sing this hymn would be like asking him to stand still while you back your car over his toes.

It's not the one of the old favorites folks expect to sing on Reformation Day. The tune is unfamiliar, written an archaic style full of tricky leaps of a fourth or fifth, and in a sad-sounding minor key (actually the Dorian mode). Luther's text is one of those complaining, lament-type hymns that ask God to deliver us from enemies, which just isn't thinking positively. And since the laity today is more biblically illiterate than at any time since the Reformation, they probably don't appreciate the aptness of its application of Psalm 124.

On the other hand, when you compare it to Jonas's version, one might at least appreciate that it's short. What takes Jonas eight stanzas to say, Luther says in only three, and he does not stray far afield from a literal paraphrase of the psalm. Nevertheless, he gets the point across most clearly -- the point, that is, of filing this hymn under "Reformation." This is a confession of the church that had reclaimed the Gospel from the obscurity cast over it by a religious establishment corrupted by power and gain. It was a confession by those against whom that establishment then bent its strength and resources, attacking them not only with propaganda and false doctrine but even by force. It is a confession that they have been set free, and will be kept free, through the almighty power of God. The subtlety of Luther's verse-translation is amazing in that, without going into the specifics that fill Jonas's hymn, you understand it as talking about the same thing. He lets the psalm itself reveal it to you.

The tune to Luther's hymn is also more effective than you might at first give it credit for. It's in the form of a "bar song," which is to say, the first couple of phrases are repeated, then followed by contrasting and concluding material. So, musically, its form could be diagrammed as AAB, or more precisely AA'B. It's a common structure in tunes of that period. You'll see a lot of it as this thread goes on. Look for a repeat sign a little less than halfway in, or for the first 2-4 phrases being repeated note for note. And you thought "bar songs" had to do with beer! (Mmmmm. Beer....)

Back to the point, now! Both of these hymns are written in "bar form," a structure as evident from the lyrics as from the tune, because of the meter of the verse and its pattern of rhymes. This structural device is an aid to memory, and not just because you get to repeat the same musical phrases. There's something indescribably right about the proportions of this musical-poetic form. It has a mysterious way of communicating its meaning, of embedding its content in your mind and heart.

WÄR’ GOTT (the tune to Luther's hymn) paints a musical picture of a big, stone church with vaults, arches, and buttresses, full of mysterious shadows and undergirded with massive strength. Meanwhile, WO GOTT (the Jonas hymn's tune) combines churchly solemnity with a sense of the voice being lifted up in a cry of supplication. Its melodic structure is, if anything, even tighter than that of the Luther tune, with one phrase coming back three times almost unchanged; in both tunes, the middle phrases are almost a note-for-note sequence, phrase 6 holding nearly the same shape as phrase 5 but one scale-step lower. These tunes, if you but knew it, are memory machines. They are ingeniously crafted to impress their lyrics on your heart. 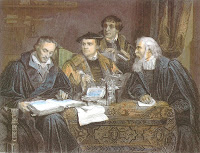 Perhaps it is no mystery why Luther's hymn has fared better than Jonas's -- for being printed in the hymnal, even if rarely sung, really is better than not being preserved and passed on at all. At least it's still saved here and there in the memory banks of living Lutherans. At least it's there for individuals to read devotionally, for families to learn together, and even for children and laypeople to learn to sing and love. For this last option to become reality, we need courageous and smart musical leaders. Their efforts are worth it, though. With Luther's 124th Psalm we get brevity and a provocative concentration of thought. From Jonas also we get a very fine hymn, but one that suffers by comparison with Luther's because of its wordiness and its looser treatment of the Psalm.

But what it lacks in literalness, it makes up in topical relevance to the Reformation. It describes some of the troubles that challenged those who first fought for our beautiful confession. Remembering their historic travails may help us to appreciate anew the value of what they defended, and to renew our commitment to upholding it. Besides that, as I have said before, a time may again be at hand when the church must struggle and suffer to abide in Christ and His Word, over-against a cultural and religious scene that despises Him. I say this not to frighten or discourage anyone. In fact, I think the coming troubles will be a blessing to the church, an opportunity to get a firm grip on things that, in times of security, we might hold too loosely.

Jonas, too, seems intent on giving positive encouragement to the faithful in such times. Consider his lines: "God doth His work another way... hath pity on the weak... The door of grace doth never close..." and thanks to God our enemies "shall not overpower us." Stanza 6 powerfully (and perhaps, for some readers, surprisingly) points out some benefits of Christian suffering. And because this is but one more divinely-revealed truth that flies in the face of reason, Stanza 7 points out that faith and reason are at war with each other. Since, therefore, we cannot believe on our own, we ask in Stanza 8 that God would "ignite our hearts with love and faith."

Unlike some strict Calvinists, Lutherans are allowed to have hymns that aren't simply metrical translations of Scripture. On the other hand, there is no law against having Psalm paraphrases in our hymnals, even two paraphrases of the same Psalm. Within the general topic of "Reformation" hymns (in the sense of hymns that lament the corruption of world and church and call on God to support the faithful), Luther's and Jonas's settings of Psalm 124 serve different purposes and impact the spirit differently. Where the Luther tune enables us to feel the solidity of God's architecture supporting us, the Jonas tune lets us feel the psalmist's tears of fright and frustration and his earnest groanings of hopeful prayer. Where the Luther text challenges us to think about the Psalm in terms of the church's troubles and God's deliverance, the Jonas lyrics describe several of those troubles in some detail ("They call us heretics," etc.).

And though some may question whether even keeping one of these hymns is worth the trouble, I would vote to include both of them in a Synod's hymnal. For they sing in the same key in which Christ described the life of His disciples, a life of cross-bearing and contending for faithfulness, and of being prepared to suffer even death for the Gospel's sake. Having them in our worship book would at least furnish us with an opportunity to speak, think, sound, and feel more Lutheran rather than less; even if for no other reason than that a Fanny Crosby hymn might have to be cut to make room for it...

IMAGES: Besides the hymns themselves, Justus Jonas alone; standing behind Luther as part of the "Sanhedrin" that worked together to polish Luther's translation of the Bible; and leaning over Martin Luther from beside the latter's deathbed.
Posted by RobbieFish at 10:18 PM