LIFE IS LIKE TENNIS: HE WHO SERVES MORE SELDOM LOSES!

Tell that to John Isner and Nicolaus Mahut, dude. Both of these heroic players surpassed the previous record for aces served in a single match, but one of them still lost. Moreover, the winner went on to 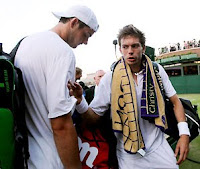 get his clock cleaned, two days later, in the shortest match of this year's Wimbledon....

Punning plays on words may make for cute little jokes and light-hearted slogans. But on holy ground, they are unforgivably tacky. For in theology, nothing is more harmful to clear thought and communication than an equivocal word--a word that means first one thing, then another within the same thought. For example, the sense of the word "serve" used in tennis has to do with something players do when they are fighting hard to win. But in the sense relevant to Christian living, it means nearly the opposite: placing the next person ahead of oneself...

Finally, let's consider the ramifications of seeing this sign under the name of a Lutheran church. Isn't Lutheranism supposed, at minimum, to stand for justification by faith alone? So what does it mean when a "Lutheran" church proclaims that the key to life is good works?
Posted by RobbieFish at 4:07 PM