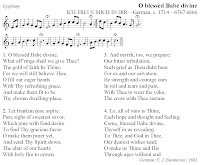 Continuing our break from the study of spiritual tackiness in the context of Lutheran hymnals, here is another rarely-seen and -heard gem from the era of J. S. Bach. It's a lovely hymn for the Epiphany of our Lord, pointing up the three gifts of the magi to the infant Jesus when they had followed an astrological sign to His house in Bethlehem. "We three kings of orient" does the same thing, only with two embarrassing inaccuracies in the first line alone. (Hint: The Bible doesn't say they were kings, nor how many of them there were.)

Offhand I can't tell you much about the author of the text. I don't know when or by whom it was translated into English. I know very little about the provenance of the tune, except that J. S. Bach (1685-1750) wrote an arrangement of it. I can't find any documentation that this hymn has ever been published in an Anglophone Lutheran hymnal. I don't even remember exactly how I came by this hymn. Nevertheless, it is lovely.

The tune, which I keep wanting to call "Bach's tune," is full of tenderness and devotion, lyrically suited to the worship of the infant God. This alone should inspire awe. How hard must it be to balance a sense of worshipful reverence with the adoration due an adorable baby? Yet Bach, or whoever, pulls it off with a tune so simple and pretty that it should make your eyes fill with tears. 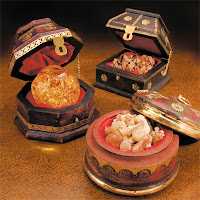 Then there's the text, which schools "We three kings" and its facile connection of gold/frankincense/myrrh with Christ's role as king/priest/sacrificial victim. Burmeister, whoever he is, connects the magi's gifts rather with faith, prayer, and suffering in that order. So these gifts that Christ's first Gentile worshipers offered Him are symbolic of God's gifts to us, gifts that bind us in fellowship to Christ. If we are united to Him by faith, we are heirs of all God's promises. If we are united to Him in prayer, we share in His Spirit's holy fire. And if we join Him under the cross, we share in Christ's death and life.

The final stanza bows to the mystery of the Triune God, the God incarnate, the God-Man Jesus who dwells in us and who creates every good "hope and thought and feeling" in us. This is all so comforting, so full of assurance, so humbly confident in the salvation which is entirely the work of the One who received the magi's worship in all childlike innocence, that it could not deliberately and meaningfully be sung by anyone but a Lutheran. And yet... how many English-speaking Lutherans even know that it exists?
Posted by RobbieFish at 11:05 PM