I continue to try new and increasingly weird things in my confirmed-bachelor's experimentation with food and drink. It's not that I'm trying to invent new recipes or anything. Stuff just happens when you mix poor planning (as evidenced by the contents of my cupboard) with an appetite for... Well, let's just leave it at "appetite." Consider this more of a "horror/comedy" post than a "how-to."

A few days ago, I spotted a single-slice pouch of Spam™ at the grocery store and decided it was worth a try. So I took one slice home and made a sandwich with it. I piled on two kinds of cheese (sharp cheddar and pepper-jack), a shmeer of white salad dressing, and a couple of forkfuls of sauerkraut. Did it work? That depends on your measure of success. 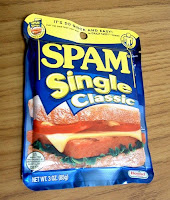 Today I decided to take a break from coffee, but not from caffeine. It's an addiction, I'll grant you, but one has to make a small, pathetic gesture of illusory freedom once in a while. Besides, I need to cut calories. So I picked up a 12-pack of zero-calorie "Pepsi Max" on my way to work. I had sucked down two cans of it by lunchtime and I was still feeling a bit below-par, so I decided I need a third... but I wasn't sure I could bear the "maximum taste" one more time. What did I do? I went over to the Coffee Mate pump-bottle. 50.7 fluid ounces of hazelnut-flavored, concentrated non-dairy creamer that I bought at Sam's Club to shave the jagged edge off their store-brand coffee. And I added one pump's worth of hazelnut-cream syrup to my pepsi. In a cup, of course. I mean, how are you supposed to stir it in the can without getting foam all over?

Now that was weird. Again, I can't call this a recommendation. Try it at your own risk. On balance, I thought it was OK. The flavor combination wasn't too bad; though, to be sure, "cola flavor" basically means "high fructose corn syrup with a slight sting of carbonic acid." But there was something a little creepy about the way most of the fizz in the soda formed a layer of stiff foam on top of the drink, like a drinkably soft meringue. Apart from that, if the Pepsi had spent more time in the fridge beforehand, I might have convinced myself I was drinking iced coffee. Really weak, artificially-sweetened, hazelnut latte frappucino, on the rocks. Hold the rocks.
Posted by RobbieFish at 1:07 PM