During the past week, when I haven't been reheating delivery pizza, I've been dining out a good deal--thanks, in part, to a recent sale at Restaurant-Dot-Com. So, sorry Mom, this bachelor hasn't been weeping all that much.

Bruno's American Grill and Pub
One evening last week, I spent one of my dot-com gift certificates at Bruno's on S. Hampton Ave. in the city. I can't remember whether I've ever visited this place, which (I recall) used to be the address of a Chinese buffet. It's a long, narrow place with a bar at one end and a single row of tables opposite the bar; an additional dining room at the other end of the restaurant has a bit more room. The decor is very "flat screen TV tuned to ESPN and you can't remember much else." 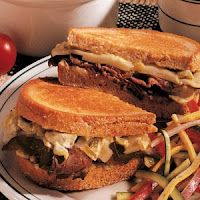 Armed with a gift certificate that gave me $10 off a $25 meal, I found that I had to buy a soup, appetizer, main course and two beers to make my minimum purchase. I started with a glass of Schlafly's Pale Ale and Bruno's take on a local specialty: toasted ravioli. The serving was surprisingly large and dangerously hot (temperature-wise), but I scarfed it all. The soup (I can't remember whether it came before or after the toasted rav) was a more than passable steak-and-vegetable in a dark brown broth.

My main course was a "beef and brick" sandwich--basically au jus with melted brick cheese on it, served with a side of crusty french fries that I scarcely touched. It all went down well, though there wasn't one part of the meal I was absolutely crazy about. I wouldn't rank it among my best dining experiences in St. Louis, but Bruno's has a comfortable, casual atmosphere and might be a good place to snack with the guys while watching the big game. Or at least the medium-sized game.

Mike Duffy's Pub & Grill
On Friday night, I gave myself over to the deepest debauchery my frail constitution can sustain: an unduly large dinner at this family-friendly pub off Clayton Rd. near Big Bend, and a movie at the adjacent theater (a romantic comedy called Going the Distance... Don't say it. It was the only thing showing that I didn't have to wait for.) This time I had to blow $35 to get $25 off with my gift certificate, a state of affairs that usually compels me to bring a guest along. This time, however, I was on my own. Since the waitress was kind enough to allow my minimum purchase to include beers, I had two stiff ones and went to the movie in a state of slight tipsiness, which I later decided was the only way to go. 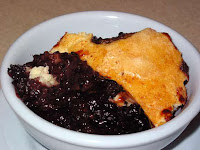 Sooner than I believed possible, I was served my appetizer: a huge order of Mike's spicy chicken strips, which are seasoned with a similar type of sauce to the wings & strips at Syberg's. I only had time/room to eat couple of these strips before my main course came, so I had them boxed up; I ended up tossing them because, after leaving them in my trunk during the movie, I didn't want to risk food poisoning. I thought they were very well made, though; my only suggestion for improving them would be to use a more traditional "Buffalo-style" sauce. But even the small portion I ate gave me an impression of a recipe worked out with great care.

What did I have for my main course at Mike Duffy's? Oddly enough, I don't remember. I have been wracking my brains over it for several minutes, and all I can say about it is that it wasn't chicken. It might have been a reuben sandwich, but it can't have made a terribly deep impression on me. Whatever it was, it would have to have been spectacularly good (or bad) in order not to be eclipsed by the dessert: a small crock of blackberry cobbler, served warm with a scoop of melting vanilla ice-cream on top of it. I stirred it all together into a soupy mush and told the waitress, "The next time I have $35 to blow in this place, I'm ordering seven of these."

Syberg's Eating Company
I've been back to Syberg's Chesterfield location several times since my first taste of shark nuggets, but I never considered it newsworthy enough to report here... until yesterday. That's when I dropped in and ordered the best Reuben sandwich I've had in ages.

I started with some complimentary bread, a crispy, crusty, warm-out-of-the-oven loaf of parmesan-cheese bread which I scarfed down because I was so hungry that I was shaking. I went on to enjoy a salad with house Italian dressing. I mainly remember that it was very large and that it had some cute little grape tomatoes. These were all perfectly ripe, juicy, and full of such a sunshiny flavor that it was almost smoky. I rooted around in the salad to get as many of them as I could because I knew I was going to have neither room nor time to finish it.

Then the sandwich arrived, with a prudent side of coleslaw (also very good), and restored my faith in Reuben. It's one of the things I tend to order at a lot of different places... just once. I think I may order it from Syberg's again. There was a kind of beautiful clarity to the way each of the flavors--corned beef, toasted marble rye, sauerkraut, Thousand Island dressing--stood out on its own while yet blending perfectly together. I had started to think perhaps I was losing my taste for Reubens, what with the soggy, flavorless mess I've been served the last few times I've ordered it. And even without a Restaurant-Dot-Com coupon, this meal rang up about the same as my discounted meal at Mike Duffy's. Thanks, Syberg's!

Tonight, the eve of my 38th birthday, I decided to spend one more cheapo gift certificate. I was in the neighborhood of Watson Rd., just outside St. Louis city limits, where I had four choices of places to go. I decided to drive past Johnny Gitto's (which disappointed me on my last visit), but to stop way short of Rich & Charlie's (because it was too far out in the sticks and I had to be in Grand Center by seven o'clock). That left, in between, two restaurants to which I had coupons. Since one of them is a new restaurant, I decided to go with the one that I already know.

It's called Mango, and it's a cloth-napkin restaurant serving Peruvian delicacies, situated off the corner of Watson Rd. & McKenzie Rd. in Shrewsbury, between a Home Town Buffet and a Chinese take-out. The interior of the restaurant reaches for a high-culture look at odds with its strip-mall location. Prominently visible from the front door is a rack of wine bottles. The suspended ceiling is painted an earthy shade of orange to compliment the walls. Weathered wooden beams appear to hold the roof up, though a moment's examination finds that they serve no structural purpose. The tables are dressed with identical fake flowers, each standing in a stylish glass that also contains a couple of glass beads and, for no particular reason, water. At a little past 5 p.m., the floating candles weren't lit, but I can see how a place like Mango, combined with a bit of imagination, could transform a mundane shopping trip into a rich cultural experience.

Again, my choices were restricted by the fact that I had to blow $35 in order to get $25 off. So I picked the most expensive entree on the menu, plus an appetizer, a dessert, iced tea (because the nature of my 7:00 appointment at Grand Center was of such a nature that I didn't dare wet my vocal cords with alcohol). And that brought my total, before taxes and discounts, to $36. After subtracting my discount and adding a not too overly generous tip, I was able to pay for all this with a $20 bill. So it worked out pretty well... but uff da! What a lot of food that was! My appetizer was something called Pascualina. The menu's description of this savory "pie" led me to expect something akin to a spanakopita, with spinach, onions, mushrooms, and three cheeses closed up inside a pocket of flaky pastry. So my first surprise of the meal was to be served an actual, wedge-shaped slice of pie. The crust was unusually soft and pliable, made (according to my waiter) out of a combination of flour, bread crumbs, and egg. The fillings were generous and delicious. After demolishing this, plus part of a complimentary serving of plantain chips and green salsa, I started to wonder where I was going to put the main course.

What, you ask, is the most expensive thing on Mango's menu? It's a seafood dish called Pescado a lo Macho. Which is, to start with, a rather large filet of tender, flaky white fish (maybe a flounder?), very lightly battered and pan-fried, then covered in a brownish sauce that packs a mean, peppery punch. This, in turn, is topped with a twist of lemon and, finally, a sprinkling of herbs. On the other side of the plate is a scoop of white rice topped with some kind of corn chutney, and a single, smallish roast potato, split in half. 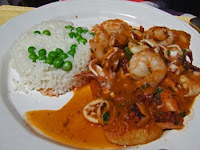 That gave me a bit of pause. Call me sheltered if you will, but I had never been served any part of a squid that couldn't be, and wasn't, disguised as an onion ring. A cruelly tough "gag" onion ring, that is. But then I thought back to how a spicy Vietnamese curry once helped me cope with my first plateful of octopus... er, parts. I decided to embrace the adventure. I sawed off one nasty-looking squid tentacle, popped it in my mouth, and chewed. The most encouraging thing about it was that it wasn't quite as tough as the calamari rings. It had something like the texture of a piece of dried skin off a roasted chicken. Its flavor was mild and faintly shrimp-like. And most importantly of all, it was coated in the same brown sauce that made the Pescado so very Macho.

Eventually I cleaned off the entire plate. Apparently my fears about not having room for it all were baseless. I was even able to gag down a delicious mango sorbet for dessert--in retrospect, probably the only dessert I could have fit in around all that luscious fish, toothsome pie, and really-not-bad squid tentacles I had packed away. It really was a dinner worthy of a birthday celebration. One of these days I'm going to get another one of those gift certificates and share the squid experience with someone, someone who enjoys a bit of adventure and a lot of food...
Posted by RobbieFish at 9:44 PM