This morning I heard a sound-bite of the imam who is planning to build a mosque near "Ground Zero" in New York City. Faisal Abdul Rauf was claiming that if the mosque was not built, the headlines in the Muslim world would say that Islam is under attack.

I thought that was an amazing statement. This man is aggressively planning a symbol of Islamic victory on the site of a building destroyed on 9-11, a day on which Muslim terrorists murdered thousands of innocent Americans in the name of radical Islam.

And now he argues that changing the plans, moving this yet-unbuilt mosque to a less controversial site, would be interpreted as an attack on Islam!

Does the "Muslim world" really set its threshold of victimhood so low?

In an interview with Soledad O'Brien, Imam Rauf went on to warn that, if this "attack on Islam" occurred, Americans abroad would be at more risk of being targeted by Muslim extremists. But if Muslim extremists are on such a hair-trigger as that, we're at risk wherever we go, and regardless of any supposed provocation.

We also need to remember the source in this. Imam Rauf has also gone on record to rationalize the 9-11 attacks, as though America was at least partly to blame for them, if not more to blame than Al Qaeda. He has said that there is more Muslim blood on America's hands than American blood on Islam's--a statement that has the ring of a religious faith-claim, that is not susceptible to any objective standards of proof or disproof, and that is probably true only if you count enemies our nation has fought alongside its Muslim allies. 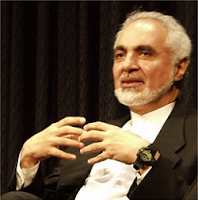 Imam Rauf is apparently the closest our nation can expect to come to friendship with a Muslim cleric. He has worked for two presidential administrations as something like a goodwill ambassador to Islam. And even he seems to think that anything we do, besides lying down and letting the Islamic world walk over us, is likely to provoke violence against Americans.

Our current leaders are listening to this song-and-dance and playing their decisions to its tune. It's too bad. They should step back and, again, consider the source. Nothing short of our unconditional surrender is going to stop Islamic extremists from targeting us. That doesn't necessarily imply we should give it to them.
Posted by RobbieFish at 5:42 AM