Have you ever, in the middle of a long drive, had to fight to stay awake? I have, many times. And pulling over to take a nap generally isn't an option. Sometimes it's too hot or too cold to be able to spend much time in the car with the engine turned off--and sleeping with the engine on is never a good idea. Sometimes you just can't get comfortable enough to sleep with the gear-stick poking you in the butt and your neck crooked against the side window. Sometimes you're on a tight schedule because, believe it or not, the hour-long, early-morning drive happens to be your daily commute. Or someone is holding dinner at the other end of your journey. So what do you do? I have tried lots of things, with varying rates of success. Playing music on the radio isn't much good, because music can make a very soothing soundtrack to your dreams. Choosing a radio station whose programming grates on your nerve-endings may help for a while, but what happens when you drive out of their broadcast area? Singing, talking, even yelling abuse at yourself will only get you so far before your voice softens to a sleepy mumble. Slapping your own face, pinching yourself, biting your tongue, etc. is sometimes effective; but really, if it comes to that, you probably have just enough time to pull over before you pass beyond all help.

Perhaps one reason I am such a fat stupid jerk is that the most effective means I know of for staving off the behind-the-wheel Sandman has to do with food and drink. Specifically, more caffeinated fluid than your bladder can hold, and what I like to call "Stay-Awake Food."

There are several categories of Stay-Awake Food. First, there are the ones that require a certain amount of concentration to eat. For example, my Dad likes to pop sunflower seeds during long drives. The process of removing the shells with his tongue, eating the eatable part and spitting out the spittable, seems to help him keep his eyes focused. My favorite snack in this category are those gummy fruit-flavored rings that one can find on the generic candy shelf in many convenience stores: apple rings, watermelon rings, peach rings, and so on. The have a shape, consistency, and texture that keeps my tongue interested. As an added bonus, 3 out of 4 pieces of this type of candy tries to get stuck in my throat. Nothing is more bracing on a long, drowsy drive than the ever-present danger of choking to death. Licorice, gummi worms, chewy Lifesavers, and many other soft-but-deceptively-chewy treats fall into this category for me. 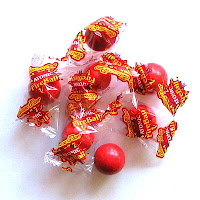 A second category of Stay-Awake Food is stuff that tastes really obnoxious. Candies with those tear-jerking "sour crystals" take the gold in this event. A bit less offensive to the palate are cinnamon-flavored confections such as Big Red gum, extra-hot Hot Tamales (the chewy candy), and my favorite: Atomic Fireballs. These are jawbreaker-type candies coated in a deep red, stingingly hot layer of cinnamon flavor. I once cruised all the way from Fargo, ND, to Crosby, MN, through midnight and its neighboring hours, on the strength of a package of Atomic Fireballs. To be sure, my mouth was raw (more like medium-rare) by the time I arrived.

In a pinch, one can make do with a bag of chips in a sweat-gland-stimulating degree of pepperiness, such as Flamin' Hot Fritos, or at least something of the tart persuasion, such as Salt-and-Vinegar Pringles. And most recently, I discovered a pair of nasal-passage-opening products at a local Super-Walmart: pop-top cans of Wasabi Peas and Sriracha Peas. Many of you will be familiar with the former, those green-coated, crunchy snacks with a horseradishy zing, frequently found in a type of Asian-style trail mix. The latter product is very similar, but the flavor coating is based on a Thai red-hot sauce whose distinctive, squeezable bottles have been turning up in more and more restaurants in the last few years. I brought it home with me the last time I visited my folks, and everyone who tried them agreed that they were really good. Between my parents, a couple of houseguests, and me, we ate up the whole canful in a jiffy. But I also found that, taken in small doses spaced out over time, they had a most startling effect on the palate... and the sinuses... An effect which would fade as you ate more of them, but which would also come back after a certain period of not eating them. And that period lasted almost as long as my ability to stay awake unaided. For that trip, anyway, it was a perfect dosage of pep.

Some might designate as a third category of Stay-Awake Food things that you need both hands to eat without making a mess--such as pizzas, subs, burritos, wraps of various kinds, ice cream treats that can't be sucked through a straw, and anything that comes in individually-wrapped, bite-sized morsels. Trust me on this. I have ridden shotgun with drivers who ate this stuff while steering with their legs on the crowded highway, and the only goods that grew out of it were my prayer life and the other guy's dry-cleaning bill. Also in this culinary danger-zone are edibles too hot to pick up with one's fingers (such as eggrolls or chicken tenders fresh out of the fryer), dishes that have to be cut, torn, or broken into bite-sized pieces (such as baked potatoes, giant breakfast muffins, and Indian flatbreads), things that you'll want to dip in sauce or ketchup (such as tater-tots or, again, chicken tenders), things you need to eat with a fork or spoon but that can't be trusted to stay on it (such as chili, fried rice, and frozen custard), and foods that are customarily served so piping-hot that they could cause serious burns to your lips, face, or even the inside of your mouth and throat (such as fresh-cooked jalapeno poppers or fruit pies). If you cruise the drive-thru at Fazoli's and order a plate of spaghetti for the road, make your peace with God.

Some pick-me-up drinks aren't worth the trouble either. I've learned to avoid bottled soda pop, the type that comes with a screw-on cap. You can never tell ahead of time whether such a beverage is going to explode and splatter everything within a two-meter radius with sticky, sugary fizz. At least with a can you have a chance to catch the overflow as soon as you crack the seal. But with a screw-cap bottle, the fizz starts escaping as soon as you twist the top... and you still have several twists to go before the cap is fully unthreaded. There's simply no saving it. This happened to me in a rental-car once, 30 miles into a 1,000-mile trip, and I had to spend the next week driving a car that looked like The Exorcist's Linda Blair had been in it during a root-beer-fueled relapse. You remember the scene from Gremlins where one of those critters got cooked in a microwave? The windshield looked like the door on that microwave. It's hard to believe anything as delicious as root beer can turn into something so icky. But what goes for screw-top bottles goes twice again

for styrofoam cups, especially when a straw is inserted through the lid, or cups in general where the lid is either missing or improperly attached. Oops! Sorry dude, you're wearing that coffee!! Not a good move when you're doing 20 mph over the speed limit!

Other pick-me-up no-nos include packets that have to be opened with both hands, unless you thoughtfully open them before you enter the roadway; foods with a crumbly texture or powdery coating that can easily get sucked down the wrong tube, such as packaged donuts; foods that fall apart in your hands, especially when they're filled with a stain-causing goop of some kind, such as fruit pies and jelly rolls; foods that have bones or shells needing to be disposed of, such as fried chicken or peel-and-eat shrimp. A nasty-tasting but safer alternative may be McDonald's Chicken McNuggets, which come in a package that fits in your cupholder, and that has a slot in which you can fit the dipping sauce of your choice.

Eating at the wheel just isn't healthy, and it makes a mess in the car. I've become increasingly reluctant to dine at the drive-through. My digestion, wardrobe, and upholstery--to say nothing of life and limb--would just as soon see me stop at a sit-down restaurant and, well, sit down. But when nothing but a stinging sensation on the surface of your tongue can keep you going through a long, dark drive, there are plenty of effective "Stay-Awake Foods" you can choose.
Posted by RobbieFish at 9:39 PM