Last night I made my own lasagna, or as my brother used to call it when he was a wee tot, legs on ya. And God saw that it was good.

I've probably blogged on the beauty of homemade lasagna before, and to be quite honest, I don't do much that the package of noodles doesn't tell me to do. I must say though, that no storebought or restaurant lasagna can ever hold a candle to the stuff that comes out of your own oven. Perhaps this is because it takes an hour to bake it, so in order to serve it in a restaurant you have to cook up a bunch of it ahead of time and serve it warmed-over (and often, as a result, dried-out). 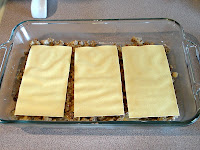 At risk of repeating myself, however, I want to plug the Barilla brand lasagne noodles, which don't have to be boiled, cooled, and painstakingly peeled off a piece of aluminum foil before you bake it. This makes the process of building a handmade lasagna that much simpler. The flat, rectangular slips of pasta are crisp and ready-to-bake when they come out of the box. The box also helpfully tells you the order in which to layer your five essential building blocks of lasagna: the noodles, the shredded mozzarella, the browned meat, the red sauce, and the ricota cheese mixture.

I enjoy making this kind of recipe, which essentially boils down to adding separate groups of ingredients together in a certain order. It's one of the reasons apple-upsidedown-gingerbread cake appeals to me. Plus, there is room for a bit of experimentation and customization within the basic structure. For example, the only herb I add to the cheese mixture is mint. There's really no need for parsley, basil, oregano, pepper, etc. Besides, your pasta sauce (which probably comes out of a storebought jar because, hey, it saves time) probably has those spices in it anyway.

Also, my browned meat mixture consists of equal parts ground beef and pork sausage, plus one onion coarsely chopped and mass quantities of minced garlic. Given a dish in which garlic works, one can hardly ever use too much of it. I have found, however, that it is just plain flavor overkill to use "Italian sausage" or, worse, "spicy Italian sausage." 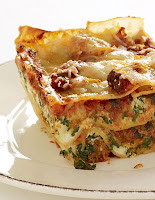 My most important browning pointers? Besides, obviously, making sure the meat is fully cooked: (1) You can brown the pork and beef separately, then combine what you need for the dish and save the rest. Using too much meat can result in the top layer of cheese welding itself permanently to the aluminum foil, a major fault in any lasagna operation. (2) Feel free to add garlic to both the pork and the beef as it browns, but for reasons of timing add all the onion to the beef. You can wait until the meat is halfway browned before adding the onion. Contrary to what you learned from making Hamburger Helper, there is no need to brown the onion until it turns to complete mush. Thus, after baking the main dish, you'll still have onion chunks with a little body to them, the kind that bursts in the mouth when you bite into it.

Another trick is spreading the ingredients around so that each layer covers the full area of the pan without using up more than its share. I find that it takes a bit more than one 24-ounce jar of tomato sauce. So I tend to throw in the leftovers from a previously opened, partly used jar, regardless of differences in the flavoring between the two jars. The mozzarella can be tricky to divvy up, too. I rely (again, for reasons of speed and laziness) on storebought, pre-shredded packages of the cheese, typically starting with two one-pound bags of it and using half of one bag in the ricota mixture, then dividing the remaining three halves among the layers of lasagna as directed by the label on the pasta package.

One last caveat: Really, really do let this sucker cool down before you eat it. Having to scrape a layer of burnt skin off the roof of your mouth is not a cool way to end a meal.
Posted by RobbieFish at 1:16 PM