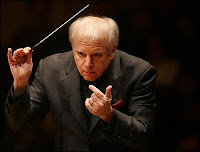 Last night I wrapped up my Thanksgiving Weekend with a visit to the St. Louis Symphony, where Conductor Laureate Leonard Slatkin returned from the "bigger and better things" he moved on to after serving as the SLSO's music director from 1979 to 1996. Headlining the program was Prokofiev's 5th Symphony, a work for which Slatkin and the SLSO won a Grammy for Best Classical Recording in 1984.

I have already done a "pscyho reading" of Prokofiev's Fifth, so I'll limit my comments on the Slatkin-SLSO performance I heard last night to saying that it was highly energetic and thoroughly absorbing, and that it brought out many details I had never noticed before. 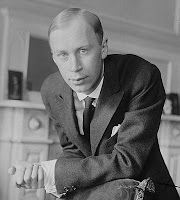 Apparently due to widespread anticipation of this, there was a larger audience last night than at most of the Symphony concerts I have attended this season. The row where I always sit, snug against the rail at the front of what is professionally styled the "Right-of-Center Nosebleed Section," was completely full, as was much of the section behind me and most of the hall below me. During the first half, I was so overwhelmed by body heat that I moved toward a less-populated corner in Far-Right-Nosebleed so that I could perspire with less concern for the olfactory delicacy of those around me. Even then, I was surrounded by people who were enthusiastic about Prokofiev's most popular symphony (save, perhaps, for the "Classical" First), and the performance we heard.

I first became a Prokofiev enthusiast in college, when Soviet music in general began to captivate me, and when I blew lots of time in a music library well-stocked with scores and recordings thereof. My passion for this music was renewed by the week ago's performance of Alexander Nevsky, in which I screamed my head off in Russian and had a ball doing it. During the short work week leading up to Thanksgiving, I listened to all of Prokofiev's concertos (5 for piano, 2 each for violin and cello) and his seven symphonies (the historic boxed set conducted by Walter Weller).

I'm now so "up" on Prokofiev that I can't wait to get hold of his operas, ballets, etc.

And though I do think Symphony No. 5 is an awesome piece, I now feel a strong conviction that the symphonic community is overdue for a deep re-exploration of Prokofiev's other, unjustly neglected symphonies--at the very least, his Second, Sixth, and Seventh. We may even find that the Third and Fourth have been unfairly judged, if we can just listen to them without dwelling on the fact that in them Prokofiev recycled (not to say plagiarized) material from his theatrical works of that period. The question should be, does the material serve its new purpose? Do these symphonies, as such, work? I think Symphonies 2, 6, and 7 definitely do. I would like to hear them all performed locally, so that we can evaluate them afresh, on their own terms.

Last night's concert opened with a 10-minute piece by Estonian-born, Berlin-resident composer Arvo Pärt, a still-living composer (born in 1935) whose musical style has evolved from Prokofievan Sovietism, through Boulezian serialism, to what our pre-concert lecturer Peter Henderson likes to call "liturgical minimalism." The version of Fratres for string orchestra and percussion (which sounds like a lot more than the claves and bass drum that it actually is) opened the concert with a soft-loud-soft dynamic arch and an atmosphere of timeless simplicity.

Topping up the first half was Rachmaninoff's Rhapsody on a Theme of Paganini, a set of variations on a theme Romantic violin virtuoso Niccolò Paganini himself had treated to variations in his 24th and last Caprice for Solo Violin. According to Rachmaninoff's own program for the work, this spectacular piece for piano and orchestra tells a fanciful story about Paganini selling his soul to the devil, in exchange for musical mastery and sexual prowess, and his finally being dragged down into hell. Hmmm. That's an interesting narrative for a composer who, in life, was most successful as a heroically virtuosic pianist.

Playing the solo was Olga Kern, an attractive young lady who plays trascendently difficult music with unbelievable strength and stamina, perfect accuracy even at unheard-of speeds, and most importantly, vast depths of romantic expression. Her spectacular encore was not only an extra treat, but it was also amazing that she still had the energy to play it after the exertion of Rachmaninoff's Rhapsody.
Posted by RobbieFish at 1:09 PM