Mental notes from a Saturday night at the symphony...

The conductor is a tall young Finn named Hannu Lintu, who combines a huge yet precisely controlled energy with a unique conducting gesture. At times, I feared for his eyeballs. The way he hauls off with the baton over his right shoulder (and sometimes even his left) before whaling a huge, fortissimo beat left me praying that he wouldn't misjudge his aim and stab himself in the face. It could happen. I've seen a conductor fork his glasses off with a baton, and I'm sure he didn't mean to do that. Apart from this wince factor, I was intrigued by Lintu's style. There is something gravity-defying about his gesture, as if he was using a wand (Harry Potter style) to levitate the music above the stage.

The soloist in the second half of the program was pianist Emmanuel Ax: a living legend, a world authority on Brahms, and a kindly-old-professor type who shouldn't have the physical strength to play Brahms's First Piano Concerto. That's the one where the piano gets treated somewhat like a blacksmith's anvil for the better part of 40 minutes. Not only did Ax rise to the challenge of this physically strenuous masterpiece, but he also volunteered a lovely, lyrical encore in the midst of his enthusiastic ovation. 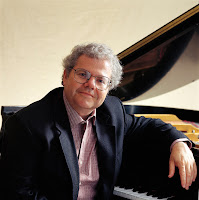 That ovation was an odd thing, though: After maybe one curtain call, Lintu never came out on stage again. I took it as slightly rude. He seems to have retired to his dressing-room while the crowd was still clapping and cheering, with no intention of basking in Ax's reflected glory. And then Ax, having come out on stage for one last bow after his encore, decided not to wait for the applause to end, but gave the musicians a sign to follow him off the stage and thus choked off the cheering. Maybe it was an issue about the hall's closing time, making sure the place cleared out before the ushers turned into mice and the timpani into pumpkins, etc. Still, while it was not the first encore I've heard at Powell Hall, it was the first time I have seen the performers turn their back on a crowd while it was still cheering.

My neighbors in the strangely sparse audience were an interesting lot. I made pleasant conversation with some of them during the intermission. A couple down the row to my right shared a mutual acquaintance with me. The gentleman to my left, whose insistence on using his seat side-saddle drove me farther down a (mercifully) otherwise empty row, hummed along with some of the tunes. The elderly gentleman in the row behind me said aloud, a heartbeat after the ending of Brahms's first movement, "That was a sensational performance." A couple who spent the whole intermission walking back and forth from one end of the gallery to the other recognized me (and I them) from earlier concerts, and asked after the book I was reading. People are getting to know me as the guy who doesn't go anywhere without a book, in case the prospect of boredom threatens. Several other people who chose to move around during the intermission stopped by the rail in front of me to make pleasant conversation. The evening was full of pleasures, even apart from the music. 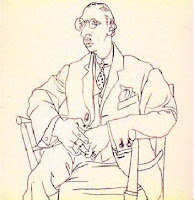 The program opened with a concertized version of a Stravinsky ballet titled "The Fairy's Kiss." Actually it's been performed far more often as a concert piece than as an actual ballet; Stravinsky himself once conducted a shorter Divertimento based on the work right here in St. Louis. The scenario of the ballet, which is only slightly relevant to hearing it in concert, has to do with an Andersen fairy tale about a young man who falls under the spell of an evil ice fairy, who first puts her mark on him when he is but a baby, and finally drags him to his doom on the eve of his wedding. The music didn't sound a whole lot like Stravinsky. At times it actually sounded closer to Tchaikovsky. This shouldn't be surprising, though, when you consider that Stravinsky adapted themes by Tchaikovsky that had never been orchestrated before.

If it doesn't sound altogether Tchaikovskian, however, that too is to be expected. Stravinsky always put his own stamp on pieces adapted from other composers, be they Pergolesi (in "Pulcinella") or Bach (in the Variations on "Vom Himmel hoch"). And that doesn't just mean the stamp of his personality or his general approach to music, but even countermelodies, extra layers of counterpoint, added ostinato figures. In this instance Stravinsky did more than take a finished piece and add new layers to it; he actually organized Tchaikovsky's thematic material in a new way, and added wholly original bridge passages, so that it is hard to tell where one composer ends and the other begins.

"The Fairy's Kiss," for the most part, doesn't enter the music world of fairy-tale magic that fans of Tchaikovsky's ballets know and love. Instead, it conjures a distinctively northern and Russian world of sound, filled with a variety of emotional textures from serious to jubilant, from a warmly romantic love theme to the chilled serenity of the "Lullaby of Eternal Dwellings." It's got a touch of morbid melancholy in it, and I think it's significant that Stravinsky thought his fairy-tale scenario was a metaphor for the tragedy of Tchaikovsky's short life, cruelly cut off at the peak of his genius.

I really went to hear the Brahms. I have always gotten a thrill out of that concerto. What made Emmanuel Ax's performance especially thrilling was the fact that I didn't sleep through the tender slow movement. It is usually such a come-down between two such extroverted outer movements--the stormy first movement, almost symphonic, almost a whole concerto in itself, and the flashy contrasts of a finale that covers everything from gypsy dance to rigorous fugue--that I don't really even hear the middle movement, most times I sit down to listen to the whole work. This time I really heard it, because Ax really played it in all its nearly religious lyricism. Brahms's own statement that this movement was a portrait of Clara Schumann (a major crush at that youthful stage in his life) grapples with a note in the score suggesting that the inspiration came from the "Benedictus" portion of the Mass ("Blessed is He who comes in the name of the Lord"). You can hear a bit of both in this, a not-quite-churchly hymn interlarded with reflections of tender intimacy. Under Ax's hands, this movement was (for the first time in my life) the one I really cared about. But he played them all so well, and the whole concerto was so exciting!

A last mental note... I coughed up $10 for a parking space in one of Grand Center's secured lots. I haven't done this in a while. In fact, since Grand Center decided to extend the hours of its curbside parking meters from 7 p.m. to 10 p.m., I hadn't paid to park in the cultural district, not once. Grand Center made this change last season on the rationale that allowing the theater- and concert-going public to park for free after 7:00 would mean fewer parking spots for patrons of the restaurants and other business in the area. The problem with this idea was that some of those restaurants' patrons included theater- and concert-goers, like me, who sometimes arrived an hour or two before showtime, fed the meter from 6:00 to 7:00, and dined in the district before going to the show. It was all part of one affordable and convenient entertainment package... until the meters' hours changed. Now the cost of curbside parking became four times as expensive and, what was worse, the only way to avoid a ticket was to feed four hours' worth of quarters into the meter. Nobody routinely carries that many quarters, and even if we did, it would be such a tedious chore that we would be open to any alternative... including parking two blocks farther away on an unmetered street, if one isn't up to paying $8 to $10 for a spot in a gated lot.

I'm sure I'm not alone in being so ticked off by it that I decided, out of pure spleen, not to patronize any Grand Center businesses before or after the concert. So not only did the district lose the money I would have happily put into their meters up to 7:00, but its tenants also lost my hunger and thirst, and the business opportunities therein. But now that Grand Center has repented of its big mistake and restored the meters' 7:00 closing time, I decided to reward their belated wisdom by going whole hog and blowing $10 on my parking space. Maybe next time I'll arrive early enough to visit the Best Steakhouse and give my order to St. Louis's nearest equivalent to the Soup Nazi--that guy who bellows "NEXT!" to the next person in line who hasn't shouted his or her order back at him....
Posted by RobbieFish at 9:44 PM